The Caves Of Kiev, A Sacred Monastery

As one of the seven wonders of Ukraine the Kiev Pechersk Lavra is a significant sacred and historical site. Kiev Pechersk Lavra has many names, the Monastery of the Kiev Caves being one, and is a UNESCO World Heritage Site along with Saint Sophia Cathedral. Situated in Kiev, Ukraine’s capital, it is a monastic complex famed for its buried monks, spiritual atmosphere, and unique underground caves. 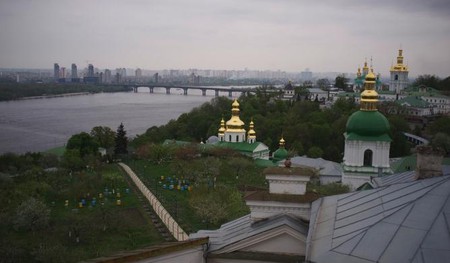 Throughout its history, Ukraine has followed the Christian faith, and contemporary traditions still stem from its deep-rooted religiousness. The architecture of Ukraine has evolved through the centuries, being largely informed by the country’s religious background. The 12th to 15th centuries saw an increase in defense structures, with fortified monasteries, fortresses, and castles being constructed. These buildings have their own decorative styles and use of materials, such as red brick plakhta. The 16th and 17th centuries saw the country’s architecture progress into Ukrainian Baroque. Ukraine’s architecture has been influenced by different genres, and by molding, adapting and borrowing details, Ukraine has forged a unique architectural presence.

Although many of them were destroyed during the Communist regime, some of Ukraine’s architectural gems still exist today and serve as a testament to its vast history and culture. The Baroque era was especially prevalent in Ukraine, as the style easily lent itself to religion. The theatrical nature of the Baroque style played with dramatic chiaroscuro effects, intense forms, and ornamentation. Such grandeur can easily express religious dedication whilst be acting as a reminder of the power and authority religion possessed. Although ultimately, Ukrainian Baroque was not as excessive as in other countries and saw relatively simpler ornamentation. 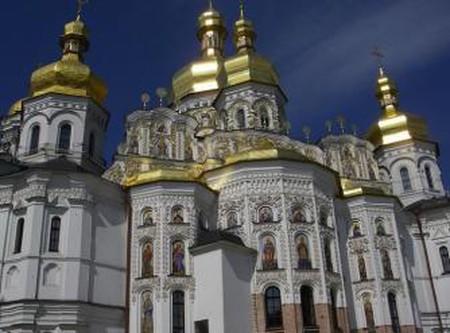 One of the finest examples of Ukrainian Baroque can be found when visiting the Gate Church of the Holy Trinity in Kiev. The church was built from 1106 to 1108 but renovated in the Ukrainian Baroque style during the 17th and 18th centuries. The South facade is especially heavy with Baroque features and other walls of the church are adorned with frescoes painted by monks. As the name suggests, the church is built above the gateways which lead into the monastery.

The monastery is a popular tourist location, as well as a destination of religious significance. It acts as an important site in Eastern Orthodox Christianity, and many Christians flock here on religious pilgrimage. Originally founded in 1051 by two monks, it serves today as the residence of Metropolitan Vladimir of Kiev, the head of the Church of Ukraine.

In the 11th century, an orthodox monk Anthony founded the monastery upon a search for solitude in the Ukrainian wilderness. He excavated a cave within the hillside where he lived a modest life. One by one monks began to join him and a community evolved. When decisions and rules were eventually implemented, a hierarchical framework emerged, and the monastery was firmly established. The monastery grew as wealthy princes and patriarchal figures donated buildings, land, and money. 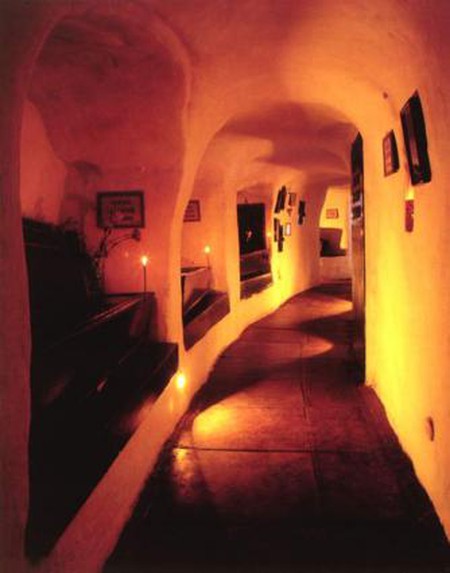 Kiev Pechersk Lavra is essentially a complex split into two parts. One above ground and one below. The caves were the beginning of a detailed excavation in which monks created a labyrinth of underground caves and catacombs. Below ground, this network takes on a greater meaning as it is full of mummified monks, religious relics, and icons. This shrine to Christianity within such a unique environment is said to have a calming and spiritual effect, and as a practicing monastery, it provides an incredibly rare insight into Ukrainian Christianity from the past and present. The sacred burial site is shrouded in controversy and mythology. Legend has it that during World War II, German soldiers exhumed the bodies of buried monks with the intention of throwing them in the river. However, after loading them, the trucks would not start and the mission was abandoned. The composition of climate and air has preserved the bodies of the monks, and although covered with cloth, they can still be viewed thanks to glass coffins.

Located above ground, visitors can find the multitude of impressive buildings which include the ruins of the Dormition Cathedral, the Holy Trinity Church, the Great Bell Tower, St. Nicholas Church, Conception of St Anne Church and the All Saints’ Church, all accompanied by a micro museum which proves very popular. This one room museum holds a collection of miniatures produced on such an impressively small scale that microscopes are provided for details to be truly appreciated. One astonishing example is of an artist’s efforts to hollow out a piece of hair as to insert a miniature rose within it.

As one of a handful of Lavras in the world, Kiev Pechersk Lavra is an experience found only in Ukraine. An active monastery, it remains a true dedication to Christianity, and even for non-religious visitors, the underground caves and preserved history provide a richly atmospheric experience.