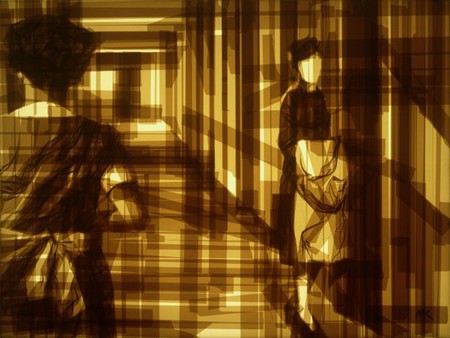 Parcel tape and plastic. Is it art? When it comes to Mark Khaisman it is. Khaisman, who was born in Kiev in 1958, is an award-winning visual artist who uses precisely these materials (and nothing else, except light) to create his arresting tapeworks, taking film stills, photographs and twentieth-century propaganda art as his subject matter.

Khaisman sees himself as a painter of sorts, ‘painting with light’ as he puts it. By setting Plexiglass sheets upon a backlit panel similar to an architect’s box-light (or light easel), he creates his ‘canvas’, on which he can construct his images. Placing swathe upon swathe of translucent brown tape onto his luminescent sheet, Khaisman builds up the image in layers. The more layers he uses, the less light shines through, and consequently, with what he calls ‘chaotic strokes’ of sepia, Khaisman can create a huge variety of depth, shadow and definition in each of his distinctive pictures. The architectural analogy above is by no means accidental; Khaisman studied Art and Architecture at what was then Moscow Architectural Institute, graduating in 1983. His previous endeavours have included forays into architectural practice, puppet animation and stained glass design; it was only in 2004 that Khaisman embarked on his fine art career in earnest. 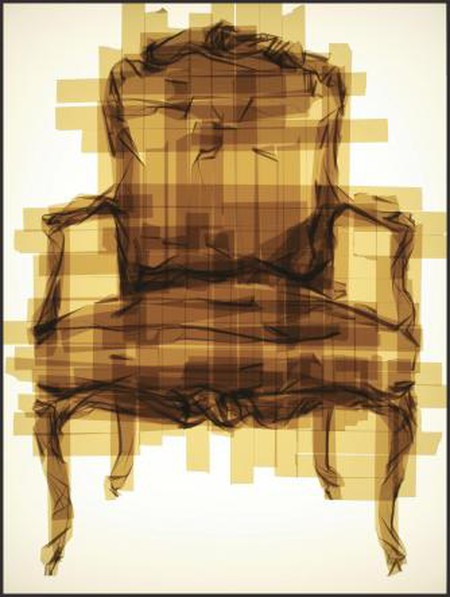 Khaisman’s pieces are often reproductions of familiar images (a Louis XIV chair or a scene from Alfred Hitchcock’s Spellbound, for instance). His penchant for film is especially revealing. Khaisman immigrated to the United States in 1989, when Ukraine was still part of the Soviet Union (Ukraine declared independence in 1991), and it is tempting to draw a parallel between Khaisman and the numerous European émigré directors of the noir films Khaisman so often references. Noir leviathans Billy Wilder, Fritz Lang and many others moved to Hollywood in an attempt to escape the threat of Nazi Europe in the 1930s and 40s, and began making films about a totally different and seductively stylish world from the one they knew, but still with an omnipresent sense of menace. Khaisman, who grew up behind the Iron Curtain, evokes a similar feeling in his viewers with his film pieces. With bright accents and heavy, secret-filled shadows, Khaisman recalls the noir aesthetic beautifully, but his use of tape – a medium so explicitly mundane and throwaway – is inescapably melancholic.

To counter this is the idea of film itself, and Khaisman ensures that the snapshot quality of his references always remains in his final works. The ideal of a glamorous and stylish Old Hollywood can be felt in his film-inspired pieces, and Khaisman himself (in an interview for Creative Mapping) said that he is always after this sense of the ‘Imaginary’ in his works. And thus, with any sense of doom and gloom in his paintings, there is always one of hope for a world beyond the mundane, too. Whether or not this was informed by his youth in the USSR and subsequent emigration, we can only speculate, but it certainly adds to a reading of Khaisman’s noir works. 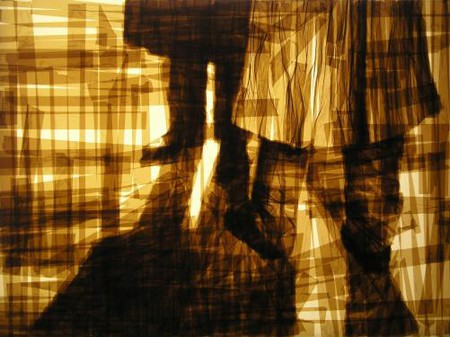 Whether of ancient sculpture, old films, and photos of family and friends, Khaisman’s paintings appear at first glance like pixelated, computerized images. On closer inspection, his attention to the subtlety, and trickery, of transparency and its potential for creating lustrous nuances, means we begin to see the familiar in Khaisman’s own, unique light. His reworking of the recognizable forces us to question what we are seeing; it is what Khaisman himself has called ‘play-it-again’ – that is, images that work on the basis of recognition (and therefore memory), rendered in a new yet utterly commonplace medium. 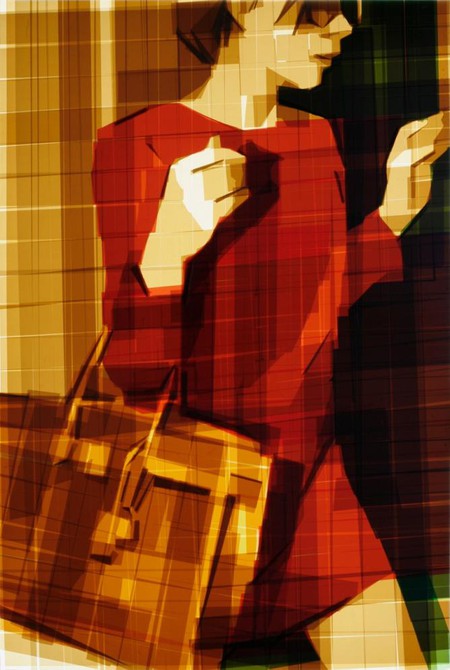 The everyday is at the heart of Khaisman’s work. It is the old “high art/low art” adage of Warhol’s Pop Art reworked, this time in the specifically twenty-first century language of computerised technology. As a result, Khaisman’s work is emphatically democratic; by using a medium unintended for art, Khaisman has ensured that painting is no longer restricted to the realm of the art connoisseur and, indeed, even to the painter himself. His tapeworks remind us that art can be created out of anything.