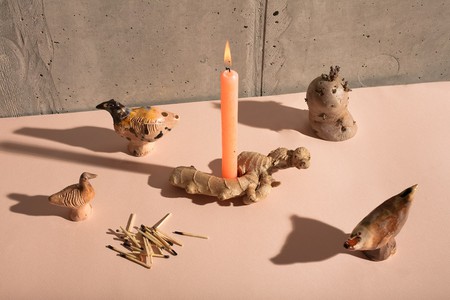 Meet the food stylist Natasha Ovramenko, who skillfully interprets the charisma of Ukrainian food markets with freedom and absurdity. She is inspired by nature, loves art and brings her own variety of uniqueness to the world. This artist could even make a crooked piece of a ginger root look stunning.

Natasha, how did you decide to become a food stylist? What is your background?

In Ukraine, in my opinion, one enters the university too early—it is difficult to understand who you are and what you want to do in life when you’re just 16 years old. I also had no idea about my future, but still, I felt something when I chose a restaurant business course in university. After completing higher education, I worked as a make-up artist and stylist, opened a showroom featuring Ukrainian designers and vintage things and worked on a set. However, fashion did not bring me the absolute joy that food had. 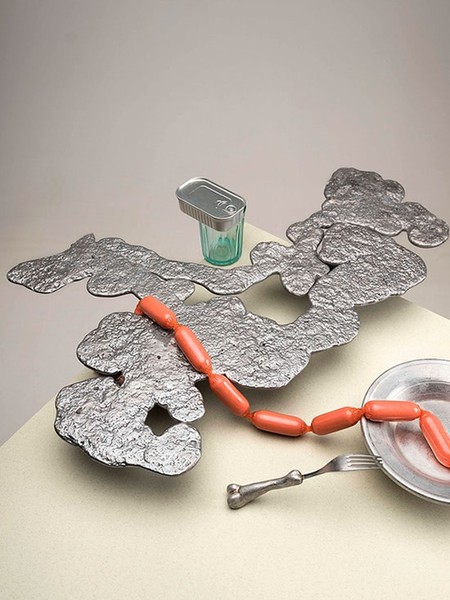 I paid attention to the fact that there were no food-related websites in Ukraine with unique content. Even though the text was created from scratch, it was illustrated by a picture from the Internet. Therefore, my mate and I created a website about people and food in Ukraine, where each photograph was made by us. We have also shot some short films.

You have worked with one of the up-and-coming British film makers, Daniel Wolfe. Tell us about the experience.

At some point, our photos were noticed by the Ukrainian film production group Radioaktiv and the promising British film maker, Daniel Wolfe, who was shooting the Lurpak (Danish butter brand) advertisement in Kiev. We were offered the opportunity to create additional photo materials for the video. It was a super experience, after which, I realized I wanted to be a food stylist. 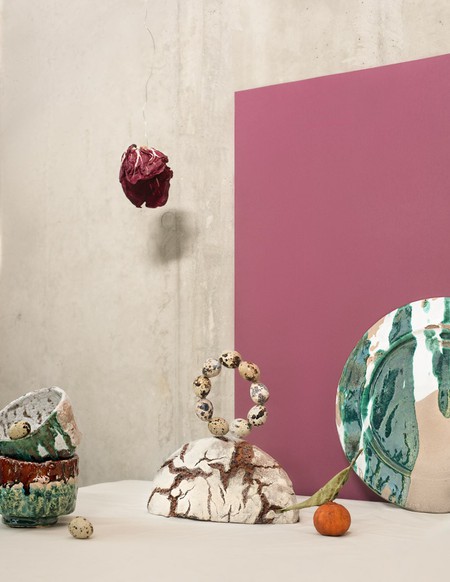 Where do you get inspiration from?

I am inspired by nature and its insane shapes and textures, as it is the basis of everything. All that is created by man is just a miserable likeness of the power that is in it. I am also inspired by Ukrainian naïve art, grassroots food markets run by babushkas (older women or grandmothers) and, in general, by Ukraine’s naked reality, where we exist at the junction of freedom and absurdity. 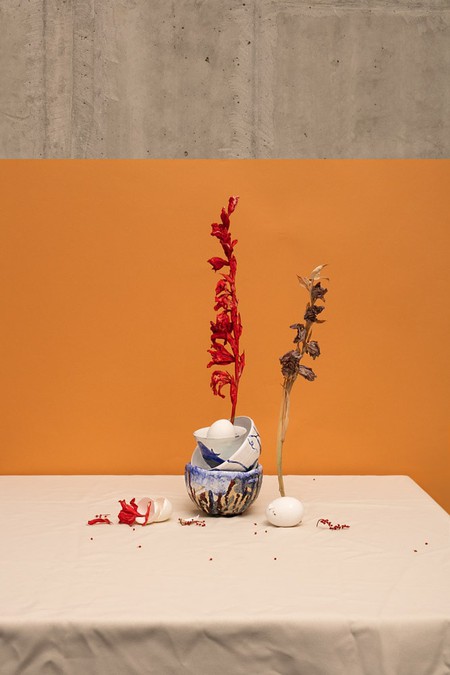 What about your abstract works? For instance, how did you come up with the idea of the photo with grapes, cigarettes and an ashtray?

This work was created for the Volunteer Fund’s charity calendar for the Ukrainian Army. Before creating it, we went around the front line of the ATO (Anti-Terrorist Operation on the east of Ukraine) zone and researched the Ukrainian soldier’s food intake during times of war. We collected real images and, on arrival in Kiev, interpreted them in the studio. In the photo one can see dried fish on a hook, grapes that soldiers picked with us in the garden of the abandoned house, and cigarettes in an iron grape leaf sheet. Due to decorative elements, these documentary images acquire new meanings by being transferred to the surrealistic plane. 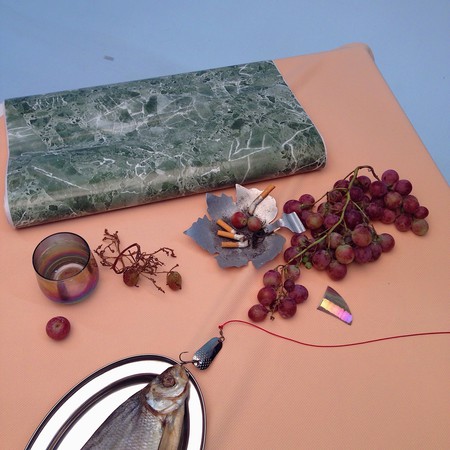 What are you trying to say in the photo with eggs and a broken plate?

The photo was made for the Dmytro Borisov’s gastrofamily (a chain of food venues). We made a project about modern Ukrainian gastronomy. We wanted to show how far the current concept of Ukrainian cuisine is from vareniki (filled dumplings) and borscht. Nowadays, it is about local snails and oysters, cheese, capon and sturgeon caviar. Everything is built up in visual and semantic contrast—black on a white monochrome background, something very expensive scruffily scattered across a plate—which makes the viewer think differently about ‘status food’. 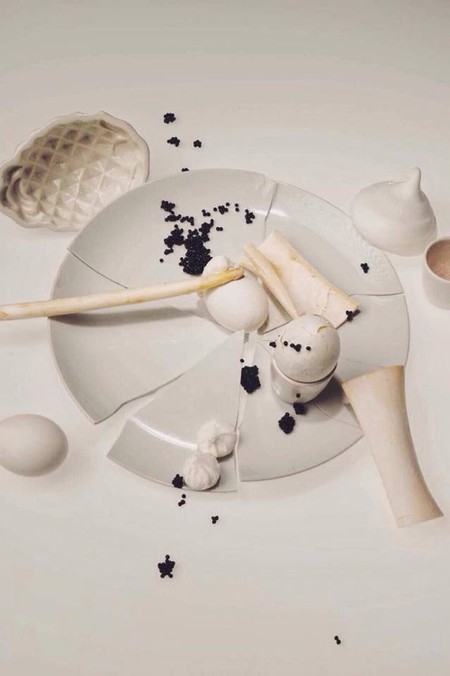 How long does it usually take to create a composition? In particular, for those with snails or lizards.

I like to use living creatures in still life photography—they add dynamics. Usually, I work with inanimate objects, but here it’s real ‘still life’. I remember taking the snapshot with the iguana: I was sure that the lizard was going to be stiff and cold, but I was delighted when I saw it was as nimble as a kitten. I swear, when we gave her a piece of fruit, she smiled. The build-up of the frame does not take much time, but the shooting of the plot can be a long story because I try to change and develop the composition. 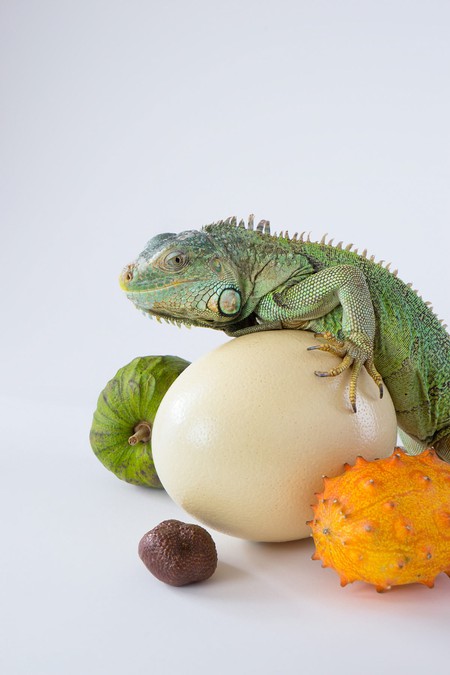 What are the stages of preparation and styling?

Before the shooting days, there is prop collection. I love this process no less than the shooting itself. Unlike the stylists that work with apparel, a food stylist has one major advantage: nothing has to be returned to the shops after the shooting. It is great when you have an opportunity to collect props and goods for a long while. I love when the idea is nurtured. Thus, over time, I realized that I like art projects or collaborations with small unique brands more than working with mass products. The reason is I like to work at my own thoughtful pace, which is absolutely incompatible with the rapid rhythm of advertisement filming. Commercials are like politics—not everyone can be comfortable with it. 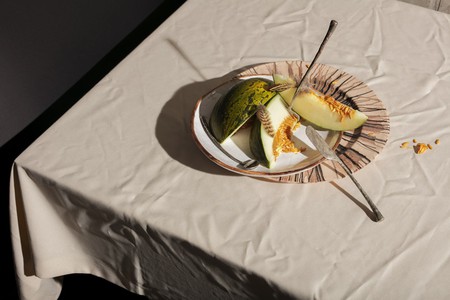 Which part of your job is the most difficult?

To be honest, the large amount of communication is the most difficult aspect for me. I’m an introvert and do not like increased attention to myself. While others get charged up by it, I get exhausted. I try to calm myself down thinking that I’m a creative person and it’s just not my strong suit. In addition, I’d like to note that shooting and preparation is, after all, a great physical effort.

The Internet is flooded with information about a variety of food stylist tricks like using glue instead of sour cream or fake groceries. Have you ever resorted to any such tricks?

I do not really like any chemical tricks even though most often they are required for commercials, especially when the food is in motion. I enjoy working with real food more. But even in shooting with natural products, sometimes it’s better to add a thickener or to lay some substrate on a plate under salad leaves. 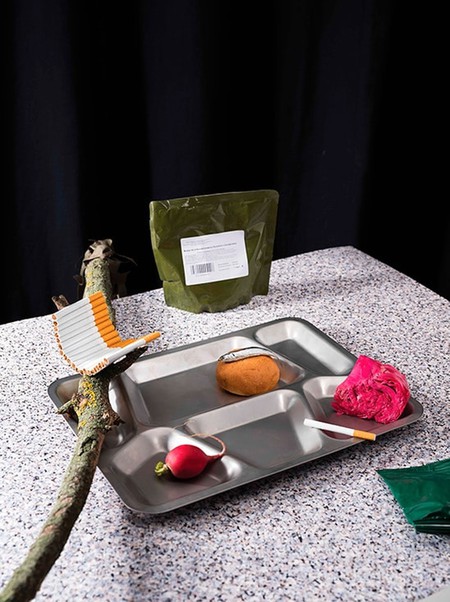 In the era of Instagram and the constantly growing trend of food photography, everyone wants their posts to look pretty, conceptual and mouthwatering. Can you please share some tips on how an average Instagram user may create an artsy food image?

I think that in the epoch of surplus, Internet and ubiquity, uniqueness and innovation are the most valuable assets that we can bring to this world. It’s better not to chase trends, and do not copy. I have no idea if it will increase the number of subscribers, but the quality of posts will definitely increase. Such standard tips as taking pictures with the proper daylight were never revoked. 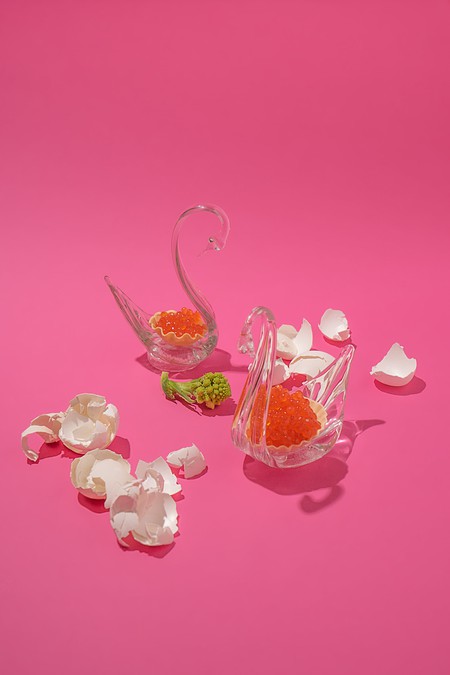