A Walking Tour of Odessa's Murals 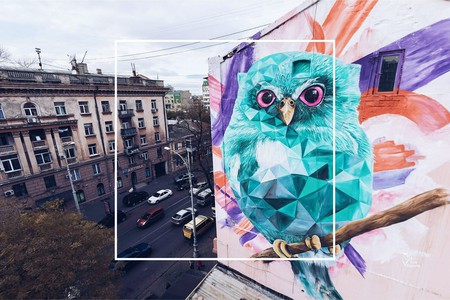 In the attempt to escape the greyness and dullness of Soviet architecture, Odessa – like Kiev and Lviv – is happy to find artworks on the walls of the city. There are masterpieces by local artists, as well as from those who have crossed a couple of continents to make their own mark. Launched by Odessarium, the movement can be called a real invasion of street art. To check out the best murals, join our walking tour.

Ukrainians are constantly fighting with companies that put ugly banners on walls and spoil the appearance of buildings. Luckily, Anastasia Belous (a Ukrainian artist from London) found a great solution and created a mural to prevent advertising there. Now, passersby can marvel at an image of a seaman with a parrot on his shoulder and not worry about a motley regular ad.

Artist Alexander Pisarchuk knows that there’s always a place for romance in our life. Therefore, he created an inspiring street art piece called The Way Home. It depicts a man who lights up all the way to the shore for a woman and saves her from the danger of the dark sea at night.

A mural created by Wanjah forwards an important message to the world. The head of a woman, assembled from different people’s faces, says that all human souls are closer than our minds think. According to Buddhism, we are united on earth by reincarnation. Moreover, such a statement is symbolic to Odessa, as the city historically unites diverse cultures and ethnic groups.

An elephant with flowers growing from its head is an amazing mural in the Malinovskyi district of Odessa. It stands out from the general landscape of the dull residential area and showcases the signature style of American artist Ernesto Maranje, who has already created three murals in Kiev.

Another work by Ernesto Maranje has been painted in the city centre of Odessa — Frantsuzsky Bulvar. The Horse mural decorates the wall of the Chkalov sanatorium and perfectly fits into the local landscape: a lot of greenery, blue sky, and the Black Sea in the background.

The bright Seal painting was one of the first murals to appear in Odessa. Created by Milan-based artist Kraser, the work occupies two walls of one building. The founders of the Odessarium project call it a mixture of surrealism, irony and a fairy tale, which is an absolute truth. By the way, it is not the first mural by the artist in Ukraine. He has also painted a wall in Kiev.

A Russian artist from Kazan, Rustam QBic travels the world and has left his mark in the United States, Norway, Ukraine, Turkey, Italy, Poland and other countries. He creates complicated and philosophical murals like In Her Mind. Everyone will definitely find their own hidden meaning in the artwork.

Another mural created by Kraser, the painting is an ode to the contemporary world and the state of migration. It is about constant wandering and traveling afar, despite the attractiveness of home, a familiar environment and the boundlessness of the Black Sea.

An American creator, Mata Ruda, raises the significant social issue of environmental protection in his Odessa piece. The mural on the four-storey building is a call to action to give nature an opportunity to live in harmony. The hand in the Black Sea is a sign of a human responsibility in the destruction of the waters and organisms in it that, unfortunately, appear to be near extinction.