A Secret Guide to the Odessa Catacombs 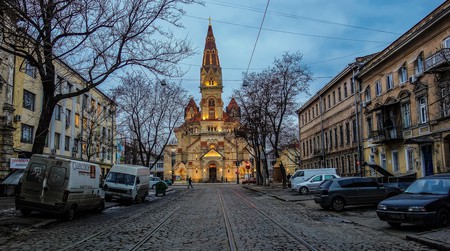 The catacombs in Odessa constitute a splendid labyrinth, lying under the city and its suburbs. It is not just an ordinary maze, but an entire underground settlement with squares, avenues, streets and, of course, dead ends. Surprisingly, the Parisian and Roman catacombs do not equal the greatness of these Ukrainian ones.

A history of the Odessa catacombs

In the late 19th and the beginning of the 20th century, a lot of architectural monuments and buildings were constructed in Odessa. The building materials, especially limestone, were used by necessity at that time. However, due to the frequent drawdowns of some buildings, a ban on the extraction of stone within the boundaries of some streets was imposed. Thus, the whole system of the labyrinths was created not only under the city but also outside its borders. The mazes included various bunkers, caves and long tunnels, which served as hideouts for Soviet soldiers and partisans during the Second World War.

Why go to see them

Undoubtedly, after a moment you grow tired of the excursions that follow the same pattern: a bus trip, dry historical facts, and a boring guide. The Odessa catacombs, in contrast to the common sightseeing tours, offer extreme activities that will make your journey engaging and unforgettable. Book a tour of the Secrets of Underground Odessa Museum in order to see the shelters of partisans, the Masonic Hall, and the Mining Museum with different household items and working tools. You will be guided to the underground church, prison, and anti-radiation bunkers, established during the time of the Cold War.

Nowadays, these underground passages are the most famous and longest in the world. Its length is estimated up to 1,553 miles (2,500 km) of labyrinths and caves connected to each other. Meanwhile, the length of the Roman and Parisian ones are 186 miles (300 km) and 310 miles (500 km), respectively. The layers of the catacombs go down to a depth of 60 meters (196 feet) below sea level. In addition to a guided tour, you can also participate in the quests of the museum and become familiar with the myths and legends of these unique undergrounds.

Legends of the Odessa catacombs

The Odessa catacombs are full of mysterious and interesting legends. One of them tells the story of the hobbit, who eats rats and bats and scares people. Another features the story of an Ukrainian captain. He saved a Portuguese boat, which had crashed near the coast of Spain in 1930. For the rescue of the crew, the Odessa navigator was awarded a gold prototype of the ship. When the war started, the captain hid his precious gift in the catacombs. Unfortunately, he died at the front, and the ship was buried in the mazes. To date, local hunters of treasures rummage through all possible places, where a golden ship could be hidden. But it has so far all been in vain.