A Brief History of Heineken Brewery

The Netherlands' most recognizable export | © Pixabay

In 1864, a young Dutch entrepreneur acquired money from his wealthy mother in order to purchase and renovate an old brewery in the center of Amsterdam. A few years after this decisive procurement, the brewery began to produce beer, which was stamped with its creator’s family name – leading to the first batch of Heineken lager.

Since then, Heineken has become practically synonymous with Dutch beer and is arguably the most recognizable product of the Netherlands. In fact, Heineken is among the most popular beverages ever created, and its signature green bottles, adorned with a red star, are available at bars throughout the world.

During its early years, Heineken won several prestigious awards for its brewing efforts, including the Diplome d’Honneur at Amsterdam’s International Colonial Exhibition in 1883, and the grand prize at Paris’ Exposition Universelle in 1889. These honors secured Heineken a place amid the world’s most esteemed manufacturers, and its lager was actually the first European beer allowed into the USA after prohibition was revoked in 1933. 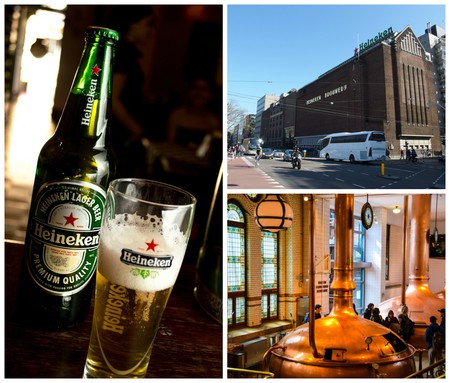 Heineken’s original brewery on the border of de Pijp in central Amsterdam remained active for over 100 years and continued to produce beer until 1988, when the company moved its main brewing facilities to a larger site on the outskirts of the city. In 1991, its former headquarters were converted into a museum dedicated to the history of the company and its monumental brewing techniques. Eventually this site became one of the most visited tourist attractions in the Netherlands and was given a new name: the Heineken Experience.

Prior to the company’s 150th anniversary in 2014, the Heineken Experience was renovated and remodeled in order to expand its museological depth. New interactive exhibitions were added to the museum, alongside other additional resources, that allow guests to discover the fascinating heritage of the Netherlands’ largest brewer and the processes behind beer production in general.