Rotterdam boasts an impressive number of public sculptures, exhibited in the city’s streets, gardens and squares. Created by world-famous artists, the collection features both iconic masterpieces and unique designs that reflect local culture and heritage. The sculptures are managed by Sculpture International Rotterdam, which sees the artworks as a way to engage the public with the arts. Here we explore 10 of the best public sculptures in Rotterdam. 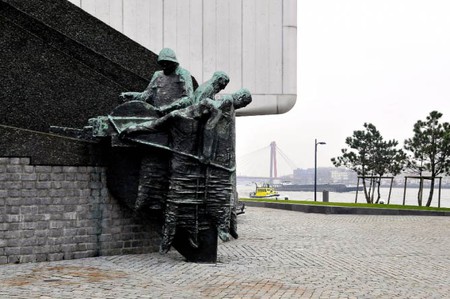 Built in memory of the many soldiers and civilians who died at sea during the World War II, Frederico Carusso’s The Bow is an imposing figure on the Rotterdam skyline, and a bleak reminder of the devastation of war. Forty-six metres high, the monument originally consisted of a towering column representing a ship’s bow, cutting through concrete waves. When it was unveiled in 1957, the sculpture received mixed criticism, and Carusso was asked to add a human element to the monument in order to emphasize the idea of human loss. In 1965, the final monument was unveiled, now with five bronze figures huddled against the bow, one helmsman, three sailors and a drowned man. 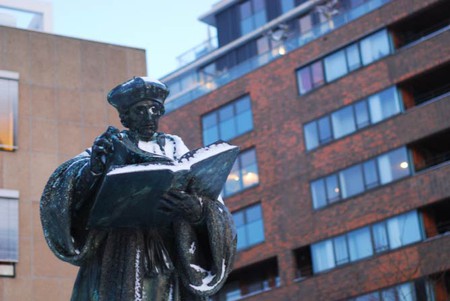 Hendrik de Keyser’s statue depicts one of the most famous figures in Rotterdam‘s history: the theologian Desiderius Erasmus Roterodamus, better known as Erasmus. The sculpture, dating back to 1622, was created almost a century after Erasmus’ death, and was likely based on sketches and drawings made of Erasmus in his lifetime. The statue reflects Erasmus’ famed intellectual abilities; he is portrayed reading, while his superior height on a two metre plinth, and his flowing robes give him a sense of authority and wisdom. The statue was located in Grote Markt for over 300 years, until the bombings of World War II forced its removal. Today it has been restored to its original location. 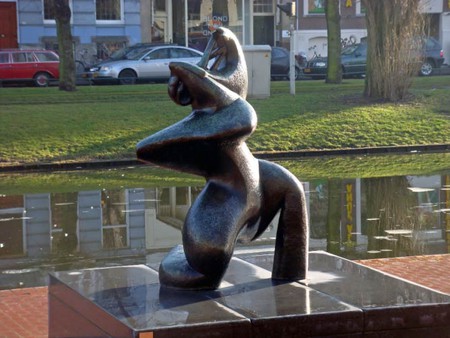 La Grande Musicienne represents a key moment in Henri Laurens’ career, as his style shifted from the firm lines and angles of early Cubism to a more poetical, graceful form. The sculpture depicts a kneeling woman playing the lyre; largely composed of sweeping curves and smooth lines, the woman’s form evokes a passionate intensity through her flung back head and taut legs. The sculpture was purchased by the city to accompany the completion and opening of the Doelen concert hall in 1966, and is seen as a visual celebration of Rotterdam’s enthusiasm for music and the arts. 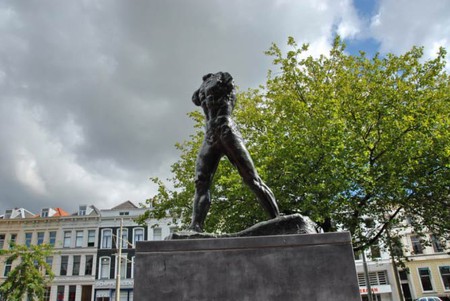 L’homie qui marche is an excellent example of Auguste Rodin’s use of realism in portraying a sense of physicality, tension and movement in his figures. According to art historical studies, the figure was not created from a single model, but was rather put together from various sketches and studies Rodin had previously done for his sculpture of John the Baptist. L’homie qui marche demonstrates the exciting contradiction between movement and stillness found in Rodin’s oeuvre: the detail and tautness of the muscles, and the suggestion of immediate walking created by the two feet flat on the ground adds a certain lively vigor; while the shining, hard bronze reminds the viewer of the sculpture’s immobile nature. 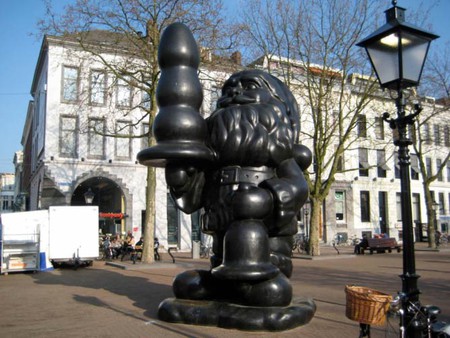 One of the most controversial sculptures in Rotterdam, Paul McCarthy’s Santa Claus caused outrage when it was revealed that the kind, jovial figure of Father Christmas was not holding a small Christmas tree, but rather a sex toy. Opinions were immediately divided, with some proclaiming it vulgar and offensive, and others arguing that it perfectly reflects both the fetishization of Christmas and the prevalent sexuality in today’s consumer society. The sculpture is certainly shocking, suggesting something obscene not only in the sex toy, but in Santa Claus’ oversized figure and beaming smile. In its time in Rotterdam, the statue has been moved all over the city in an attempt to find it a home, and has settled for the time being in Eendrachtsplein.

The Screw Arch was originally intended to form part of the design for a new Rotterdam bridge, with two mirroring arches spanning the width of the river. Artist Claes Olderburg was invited by the director of the Museum Boijmans van Beunigen to create a model and sculpture in preparation; four years later, the final project was delivered to Rotterdam. Although by this point the plan to build the new bridge had fallen through, the impressive sculpture, seven metres long and four metres high, was placed at the water’s edge in the museum’s gardens, recalling its original purpose. Thanks to its imposing size and industrial quality, the sculpture treads a fine line between architecture and art.

Sylvette depicts one of Pablo Picasso‘s most famous muses, the 19-year-old Sylvette David, who acted as his inspiration in a number of drawings and sculptures. In this sculpture, Picasso reverts to his Cubist style, breaking down his subject into a number of different features and components which are then put together again from various angles, thereby abandoning the classic rules of perspective and composition for a comprehensively unique portrayal of the much-studied face. Although designed by Picasso, this sculpture was in fact rendered by the artist’s friend Carl Nesjar, who created it from concrete mixed with black pebbles, sandblasting the top layer of concrete off to reveal the details of the face and figure.

Two Turning Vertical Rectangles is one of the most striking works in this collections. The 20-metre high piece defies the most fundamental, widely-accepted rule of what defines a sculpture – its immobility – and thereby challenges the viewer’s presupposed perceptions of the art of sculpture. Artist George Rickey was influenced by the kinetic sculptures of Naum Gabo, who created one of the first moving art works in the 1920s. Rickey’s own finished work is captivating in its simplicity: two stainless steel rectangles rotate around a fixed pivot high above the heads of passers by. The reflective surface emphasises the dynamism, while the simplicity of the design focuses attention on the act of movement. 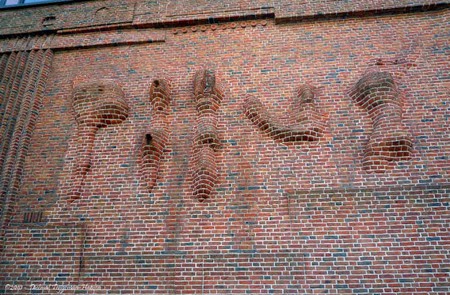 Henry Moore is best known for his abstract sculptures of figures, recognizable for their undulating lines and large, unusual proportions. Wall Relief No. 1 deviates from Moore’s typical subject matter, while still remaining emblematic of his style. The relief is largely made up of geometric shapes and patterns – parallel and perpendicular lines, rectangles and circles – largely occupying the outer edges of the wall. In the center are five forms resembling Moore’s usual sculptures, their soft lines and natural forms contrasting with the strict lines and angles of the work’s edges. The relief took over four months to construct, and is made up of approximately 16,000 hand-carved bricks.

Made in honour of Queen Wilhemina, the Dutch monarch from 1890-1948, this sculpture by Charlotte van Pallandt is a touching, emblematic portrayal of a beloved monarch. A vastly popular leader and a figure of strength and resistance throughout World War II, Queen Wilhemina enjoyed a particularly close relationship with her people. Van Pallandt’s statue reflects this: the figure is carved from solid bluestone, and stands in an attitude of determination, while its upward facing profile suggests looking up to the Dutch people with respect, rather than down from a position of superiority. The sculpture was a great success when unveiled, and was particularly praised by Wilhemina’s daughter Queen Juliana.