The Best Vegan Cafés and Restaurants in Stockholm 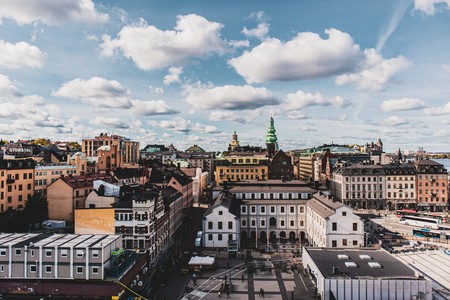 Though it used to be difficult to even order vegetarian dishes in Stockholm – with most found in the more bohemian neighbourhood of Södermalm – the city now offers a range of vegan cafés and restaurants to suit every taste. Its thriving food scene has introduced a new focus on local ingredients and innovative cuisine, which is reflected in the excellent range of vegan dining options. Here are Culture Trip’s top picks to find the best plant-based dishes in the Swedish capital.

Previously known as Sthlm Raw and located in Långholmsgatan, Fern and Fika is a plant-based café reinventing the Swedish tradition of fika – that is coffee with a sweet treat. “Our food is always 100 percent vegan, gluten-free and free of refined sugar and, therefore, kind to the body, animals and the planet,” says the café’s CEO and co-owner Monika Majnik. Cosy and filled with greenery, it’s a great place for a delicious afternoon treat, without feeling stuffed with unhealthy additives. “We are well known for our wide offering of delicious raw desserts – favourites would be a ‘Snickers’ slice or a seasonal, raw version of a traditional Swedish semla (sweet roll) – as well as our brunch and breakfast,” she says.

A major hotel chain may not be the first place you’d expect to visit for good vegan food, but the Radisson Blu Royal Park is changing that. Situated next to the beautiful Hagaparken nature area and Brunnsviken lake, the hotel is only 5km (3mi) from the city centre and close to Bergius Botanic Garden, the Swedish Museum of Natural History and Haga Castle, the official residence of Crown Princess Victoria of Sweden. “The hotel does fully vegan brunches every Sunday and also has an amazing food lab producing raw ice creams and cultured vegan cheese,” says Monika. For a sophisticated weekend treat, tuck into all-vegan dishes, including American pancakes, croissants, home-made kimchi and Chinese dumplings, to the sounds of a live jazz band.

Restaurant, Vegetarian, $$$
Facebook
Email
Twitter
Pinterest
Copy link
Share
Map View
“Hermans is a true veggie institution in Stockholm, having served hungry guests from all corners of the world since the early ’90s,” says Anna, who works at the restaurant. “In 2015, the restaurant went fully vegan, but the concept remains the same – serving a colourful and highly popular buffet, as well as a lovely range of home-made baked goods and raw desserts.” The much-loved restaurant on Fjällgaten now offers a delicious all-day buffet, recycles all waste and even ensures staff uniforms are made with organic cotton and bamboo. “There are spectacular views overlooking the bay,” she says. “And in summer, Hermans also boasts a lush garden on three levels with over 300 seats, hammocks, a toddler’s corner and outside cooking and dining.”
Open In Google Maps
23B Fjällgatan, Södermalm Stockholm, Stockholms län, 116 28, Sweden
+4686439480
Visit Website
Give us feedback

Worth splashing out on, Växthuset is a vegan fine-dining restaurant determined to elevate plant-based food to gourmet levels. Next to popular nightclub Under Bron, it serves only seasonal and local ingredients, many of which are foraged from the area around Stockholm. These are combined with traditional Nordic preserving techniques, such as pickling and fermenting, best showcased on the ever-changing tasting menu. Pair the dishes with natural and biodynamic wines from boutique producers or local non-alcoholic drinks. Make a booking, and you’ll receive a number to call on arrival to avoid having to queue. As a bonus, you get free entrance to Under Bron after dinner if you want to dance the night away.

Previously known as Halsocafet, this colourful café opened in 2015 and now has two branches: the original in Södermalm and a new one in Vasastan. Using mainly organic and all-vegan ingredients from small, local companies, the menu focuses on nourishing smoothie bowls, delicious salads and juices, with hearty breakfasts served until 11am each day. Don’t miss the scrambled tofu, mashed avocado and vegan bacon on toasted sourdough for a heavenly start to the day.

MyVegina was created on three fundamental pillars of veganism, feminism and symbiosis. “Science tells us that just looking at a picture of greenery makes you calmer and lifts your spirits,” founder Irma Arlert wrote on the café’s website. “We need to nourish ourselves with recharging green rooms, and why not do it while we are eating?” Decorated in shades of green throughout, MyVegina now has two outposts: one in Odenplan in the city centre and the other in Medborgarplatsen. These convenient spots make it easy to call in for smoothies, sandwiches, pastries and hot and cold bowls. If the weather’s chilly, try its warming gingerbread golden milk with coconut-oil-braised turmeric, black pepper, gingerbread spices and steamed oat milk.

Don’t feel you have to miss out on Stockholm’s moreish cinnamon buns because you’re vegan. Instead, head straight to this laid-back neighbourhood spot known for its sandwiches, salads and tasty baked goods, as well as live music and art events. “This is a super homey café with vegan comfort food,” says Monika. The food is all vegan, though some beer is not. Expect big portions, friendly staff and a pile of board games in the corner if you want a challenge over the home-made pastries.