The 10 Best Restaurants In Stockholm 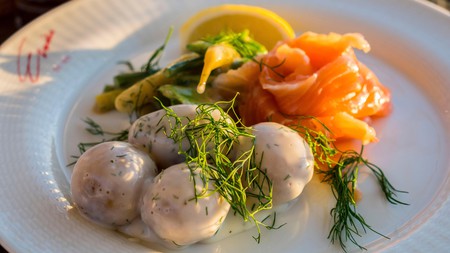 The restaurant scene in Stockholm, Sweden’s capital, is a joy for gourmets to discover. After wandering the city’s cobbled streets and admiring its waterways and historical architecture, sit down for dinner at a modern Asian, classic Italian or innovative Nordic restaurant – or choose one of the many other options available in the city. 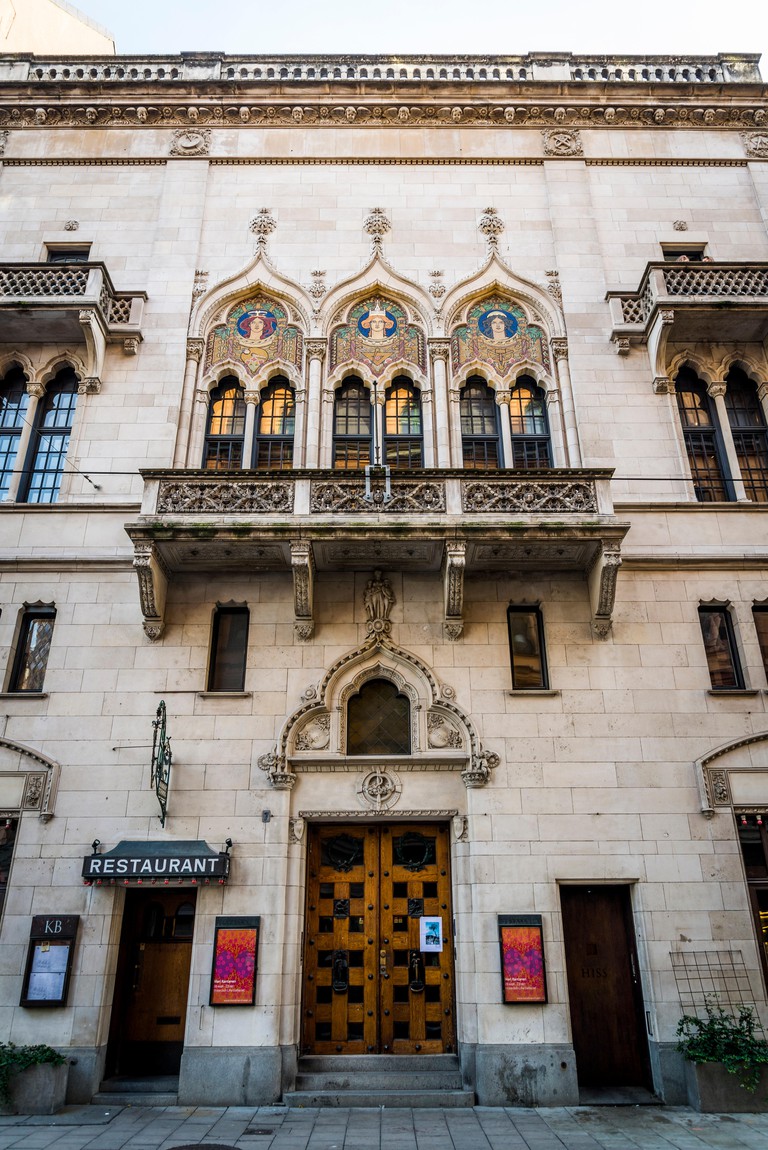 Konstnärsbaren has been a beloved part of Stockholm‘s restaurant and bar scene since it opened in 1931. Its name means “the artist bar” and is well deserved – Konstnärsbaren is home to an abundance of artworks created during or after visits to the bar by artists including Isaac Grünewald and Einar Forseth. The restaurant is relaxed, arty and laid-back, and the food is classic Swedish husmanskost, heavy on the meat and potatoes, but there are vegetarian options, too. It’s a lovely place for dinner, with its eye-catching murals and cosy atmosphere. 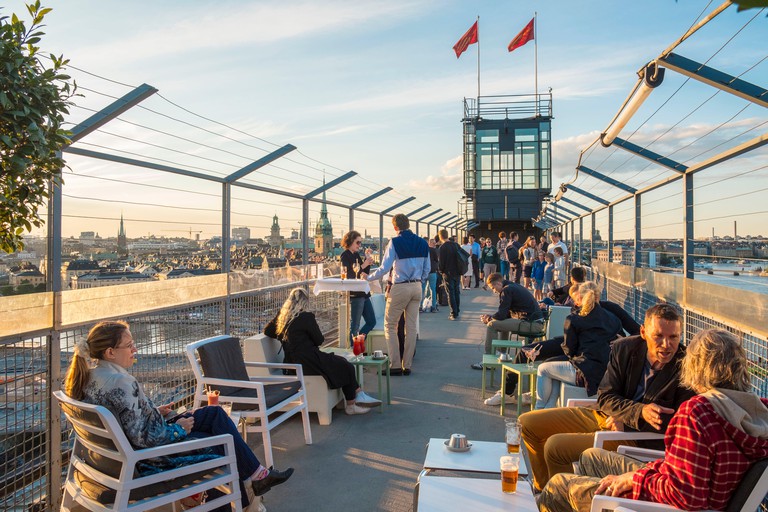 Chef Erik Lallerstedt is a legend on the Swedish restaurant scene, and Gondolen is one of his finest creations. High up above the busy Slussen area on Södermalm, Gondolen offers up views that stretch across the city. The food is modern, slightly experimental and very Nordic, and the drinks and wine lists are among the best in the city. Try the set menu to experience all the kitchen has to offer, or why not go for a shellfish plateau – Swedish seafood is very good, and you’ll rarely eat it in more interesting surroundings.

Indio Kitchen is Sweden’s first Nikkei restaurant – the cuisine that developed when Japanese immigrants in Peru began creating Japanese dishes using Peruvian produce. It’s a winning combination at Indio, which is also located in the hip Södermalm area. The menu features plenty of sushi options, as well as sashimi, ceviche and cordero. The restaurant itself is cosy, has friendly staff and a trendy clientele. Try the chef’s menu to get the full Nikkei experience, or mix and match the dishes yourself. 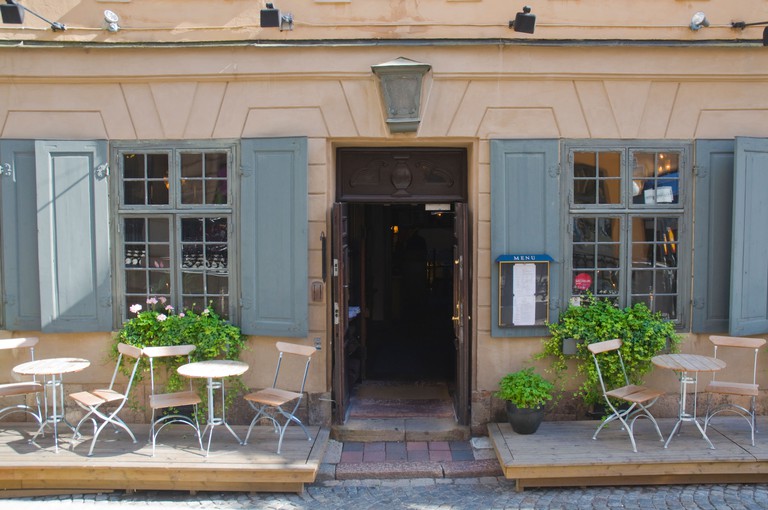 © Peter Forsberg / Alamy Stock Photo
Since 1722, Den Gyldene Freden’s chefs have been cooking traditional Swedish cuisine, including meatballs and herring. The restaurant has moved with the times, though, and today the menu also features plenty of tasty vegetarian options. The dining room, which seats 150, resembles an 18th-century Swedish tavern, and its high ceilings, long wooden tables, soft lighting and wooden floors allow guests to get a sense of the restaurant’s history. The service is attentive and friendly, and the beautiful kitchen on the lower floor is completely visible.
Open In Google Maps
51 Österlånggatan, Södermalm Stockholm, Stockholms län, 111 31, Sweden
+468249760
Visit Website
Give us feedback

Smack bang in the middle of Stureplan you’ll find Taverna Brillo, a large Italian restaurant with its own bar, Växthusbaren. This is the place to go to start the evening – Stureplan is a popular party area that draws an upmarket clientele, and Taverna is big enough to seat larger groups. The food isn’t the cheapest, but well-priced for the neighbourhood, and everyone is sure to find something they like on the menu. Find a selection of traditional Italian favourites, including a truffle pizza that the restaurant has become known for. Make sure to have a drink in Växthusbaren before or after dinner, as it usually has good events and DJs .

In February 2015, Oaxen Krog received its second star in the Michelin Guide. This Nordic culinary treasure used to be located on the island outside Stockholm that gave it its name, Oaxen. In 2013 the founders, Magnus Ek and Agneta Green, decided to move Oaxen Krog, the fine-dining version, and its sister bistro, Slip, to a more accessible waterfront position in the city. Oaxen Krog uses the wild herbs on Djurgården, where it’s now located, in its Nordic cooking and prides itself on its unique ingredients, sustainable agriculture and humane animal husbandry.

With its red-and-white checkered tile floor, dark wood furniture and white tablecloths, Café Nizza brings some Mediterranean charm to Stockholm’s restaurant scene. A favourite with the fashion crowd, the bistro serves excellent Italian and French food – including some of the best pasta in town, and a selection of well-priced mains, too. The friendly atmosphere and great wine list makes it a perfect spot for a romantic dinner, or drinks and snacks with friends.

Ever since 1961, Operakällaren has been responsible for all the catering at banquets and dinners at the Royal Castle. The haute cuisine by Stefano Catenacci was awarded its the first Michelin star in 2014. The restaurant is elegantly designed with gilded oak panelling, grand chandeliers and an impressive geometrical wood-panelled ceiling. Guests can choose from a fine dining menu in the exclusive Main Dining Room, or a more casual dining experience at The Hip Pocket (Bakfickan). After dinner, guests can enjoy a drink in the beautiful, Art Nouveau-style Opera Bar. Though Bakfickan is more affordable than Operakällaren, this is a restaurant to visit for special occasions.

Urban Deli is a homegrown success story, a restaurant and deli that due to its popularity now has several locations across Stockholm. The Sveavägen branch is conveniently central and a good choice for dinner, with its own cocktail bar, Höjden, on the roof of the building. The large space has a cosmopolitan vibe, and a menu that complements the surroundings perfectly. Don’t miss their delicious Korean steak tartare with coriander and chilli mayonnaise, while there are plenty of vegetarian dishes on the menu and a well-curated selection of cocktails. The Palme is named in honour of the Swedish Prime Minister who was assassinated in 1986 in the street where the restaurant is now, and whose memorial plaque is outside.

Restaurant, Swedish, Northern European, $$$
Facebook
Email
Twitter
Pinterest
Copy link
Share
Map View
Lilla Ego is led by two award-winning chefs, Daniel Räms and Tom Sjöstedt, who focus on creating innovative Swedish dishes with a twist. It has paid off – Sjöstedt has created the Nobel Prize banquet dinner two years in a row. The tiny dining room has an open view of the kitchen, and the evening’s menu is handwritten on big white sheets. Though it’s very hard to book a table here (you usually have to do so months in advance), the restaurant always has nine places at the bar available for drop-ins.
Open In Google Maps
69 Västmannagatan, Norrmalm Stockholm, Stockholms län, 113 26, Sweden
+468274455
Visit Website
Give us feedback