How to Make the Most of Three Days in Stockholm 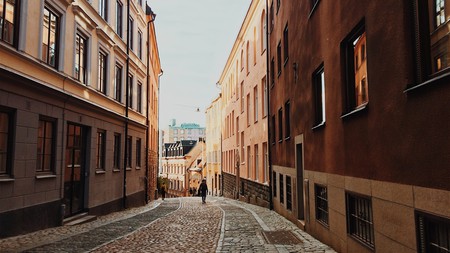 Enjoy the peaceful parks, world-class shopping and cosmopolitan food scene on a short break to Sweden’s incredible, buzzing capital city. With recommendations from international pop star Zara Larsson, to local tour guide Carin Christensen and Scandinavian food blogger Fanny Bsenko, this is the ultimate guide on how to spend a long weekend in Stockholm by those who know the city best.

Morning: Start with the best brunch in Stockholm

Start your trip in the heart of Downtown Stockholm at Kungsträdgarden Metro Station, underneath one of the city’s oldest parks. Don’t rush upstairs without taking a moment to marvel at the elaborate painting in the station itself, part of Stockholm’s astonishing metro art project. “Almost everything on the station tells the story of the site above ground,” says subway art guide Marie Andersson. “About its history, former and current buildings.”

Back on ground level, stroll through the park past the Grand Hotel towards the Nationalmuseum, Sweden’s museum of art and design. Art lovers should call in to tour its collection of paintings, portraits and sculptures from the early Middle Ages to present day. Take the Skeppsholmen bridge right outside afterwards to the small island of Skeppsholmen, pausing by the golden crown in the middle of the bridge for the best view of the Royal Palace.

Head straight for brunch at Långa Raden. “A beautiful location, elegant interior and great food, Långa Raden definitely delivers one of the best brunch experiences in Stockholm,” says food blogger Fanny Bsenko. “If you still have room for dessert, the French toast with caramelized apples is a real winner.”

Afternoon: Take your time over medieval streets and fika

Stroll along the path, round the island for views of the Royal Palace and Gamla Stan (the Old Town) across the water. Linger longer to visit one of the island’s four museums, the Moderna Museet (Modern Art Museum), ArkDes (Architecture and Design), Stockholm Toy Museum or the Museum of Far Eastern Antiquities. Otherwise trace your steps back over the bridge and onwards to Gamla Stan itself to wander its winding medieval streets and narrow alleys.

There are plenty of cafes along the way to break for fika (the Swedish tradition of unwinding with coffee and cake). The cosy Chokladkoppen is perfect for people-watching from the terrace over appetising sandwiches and cinnamon rolls. For the ultimate treat, order their popular white hot chocolate too. Afterwards walk for two minutes to The Finnish Church. Be sure to look behind it to spot Stockholm’s smallest statue, the 15cm-tall Iron Boy, which is said to bring good luck to anyone who touches its head.

Head to the atmospheric Oummi for dinner, a modern Lebanese restaurant just a few minutes’ walk away from the centre of Gamla Stan. “Make sure to start your dinner with an Oummi Martini – this cocktail will honestly blow your mind – and then treat yourself to a meze tasting menu,” advises Bsenko. “A few of my favourite dishes include the spicy shrimps, hummus with beef fillet, labneh, fried halloumi and spinach fatayer.”

Night: Dance under the stars in a summer club

Snug bar Tweed is only steps from Oummi and perfect if you want to curl up in a Chesterfield armchair with a drink after a day walking the streets of Stockholm. In the summer months, walk a further ten minutes to F12 Terrassen instead; an annual summer club just behind central station that plays techno, house and hip-hop seven nights a week.

Morning: Start the day at Stockholm’s most picturesque park

Easily reached by bus, tram or on foot, the former royal game park of Djurgården is a peaceful place to start the day. “The island is the greenest of them all, with vast areas of forest and open spaces,” says Stockholm tour guide Carin Christensen. “It’s difficult to imagine you’re in the middle of a big city.”

Call in to the greenhouse cafe at Rosendals Trädgård for morning coffee and exquisite homemade pastries. Once you’ve finished breakfast, hire a bike or canoe from the visitor’s centre just past the bridge to explore. Afterwards, walk to the Vasa Museum, one of Scandinavia’s most visited museums, to explore the world’s only preserved 17th-century ship.

Stockholm’s best (and most fun) museums are all within 10 minutes’ walk of Vasa. Step back in time to the 1970s at the interactive ABBA Museum or discover Sweden’s rich history at the world’s oldest open-air museum at Skansen. You can even explore Swedish drinking culture – including a simulation of a hangover – at the Museum of Spirits (Spritmuseum), and then call into their award-winning restaurant for lunch. “It’s actually one of the best spots in town for a decent Swedish lunch,” says food writer and photographer Anders Husa. “Spritmuseum serves dishes such as herring and potatoes and lamb and peas. The place is particularly beautiful on a summer day.”

Take it easy for the rest of the afternoon by strolling 20 minutes north to Nybroplan and joining one of the many boat tours that depart from there. “Stockholm was built on 14 islands. I think all visitors have to see the city from the water,” says Christensen. Try the Under the Bridges tour from Stromma to travel under 12 of the city’s soaring bridges and through the lock that connects the Baltic Sea to Lake Mälaren.

Evening: Get into the party spirit at one of Stockholm’s liveliest restaurants

Back on dry land, walk 20 minutes to dinner at sleek Nordic restaurant Lykke, where guest DJs, an optional communal table and perfectly executed cocktails create an all-day party atmosphere at this popular spot. “Any bar that serves their drinks with a side of Parmesan-grated popcorn has my respect, but this stylish restaurant and cocktail lounge truly impresses with their comprehensive selection of premium spirits,” says Bsenko.

If more cocktails call, it’s well worth the 20 minute walk to A Bar Called Gemma in the heart of Östermalm, winner of the Best New Bar 2019 at the Bartenders’ Choice Award. Ask the bartender to create a drink just for you, or order a zingy Gemma, with Bombay Sapphire gin, sake, pistachio, ginger and citrus.

If you’d rather hit the dance floor, head straight to Sturecompagniet, one of Stockholm’s biggest nightclubs and a favourite with the city’s glitterati. This glamorous but pricey club is set over two floors and open until 5am between Thursday and Saturday. It’s well worth arriving early to avoid the queues.

Don’t stress if you sleep in, as Omayma Nytorget serves breakfast all day, every day on Södermalm, Stockholm’s biggest island. “On the menu you’ll find colourful salads, hearty sandwiches, homemade pastries and refreshing drinks,” says Bsenko. “The filled croissant with salmon, egg and avocado is a must-order, and the same goes for the banana bread tiramisu.”

Explore the island on foot afterwards. Browse the independent galleries on Monteliusvägen, Stockholm’s unofficial art district, or walk to Monteliusvägen for a fantastic view of Lake Mälaren and Stockholm City Hall. If the sun’s out, head through trendy Hornstull on the waterfront to the tiny car-free island of Långholmen, where you can rent kayaks, swim in the lake and relax on the small beach. Otherwise stay on Södermalm to visit the largest photography museum in the world. “One of my favourite museums is the Fotografiska,” says local tour guide, Christensen. “Their award-winning restaurant is also a perfect place to stop for lunch.”

“If you like second-hand or vintage shops, this is the best area,” says Christensen. Start at Hornstulls Market on Södermalm waterfront for vintage clothes, antiques, books and arts and crafts. The market is held every Saturday and Sunday between April and September. The market’s food trucks are also ideal for grabbing lunch on the go.

Afterwards, walk up Hornsgaten for the city’s best vintage shops, a firm favourite with Stockholm pop star Zara Larsson. The Swedish singer tells Culture Trip, “Humana is good and they have a cool playlist. Sometimes I want to just stay there to listen to the music. Another good vintage store that’s a little fancier is Siv & Åke which has a lot more accessories and shoes. One of my favourites for home things is Brandstationen: they have everything from plant pots to chairs and mirrors.”

You’re spoilt for choice on a night out in Södermalm. Try the lively, unpretentious Hornstulls Bodega for a great atmosphere and affordable wine list. Or alternatively, Fröken Vandal just next door, a wine bar opened by Swedish rapper Petter that is open until 3am on weekends. Tjoget is close by and a great place for dinner. “Amazing cocktails and delicious food in a bustling atmosphere,” says food blogger Bsenko. “The food menu is heavily influenced by Spanish cuisine. I would recommend ordering a few dishes to share.”

For techno, up-and-coming live music and underground club nights, Fållan in the city’s meat-packing district Slakthusområdet can’t be beaten. Check the website in advance, then take the red metro line to Liljeholmen and a tram to Globen. If it’s Sunday, walk 15 minutes from Tjoget to Patricia. There you will find an old ship anchored between Södermalm and Gamla Stan that has hosted Stockholm’s biggest gay night for over 20 years and stays open until 5am.