An Alternative Guide to Stockholm and Its Best Kept Secrets 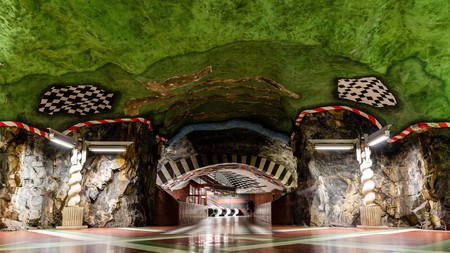 From forest safaris to rooftop hikes, these are the 10 secret places you need to know about in the Swedish capital.

With so many things to see and do, Stockholm has become one of Europe’s favourite city breaks. Located where Lake Mälaren meets the Baltic Sea, the Swedish capital is spread across 14 islands connected by 57 bridges and draws millions of tourists each year to attractions including the Royal Palace, the ABBA Museum, Gamla Stan and Skansen, the world’s oldest open-air museum. But beyond the best-known sights, Stockholm still has plenty of secrets to be discovered away from the crowds. Here are 10 of the best alternative things to do in Stockholm.

Relax on the beach at Långholmen

When Stockholmers want to feel like they’re on holiday without leaving the city, they head to the tiny island of Långholmen. This spot is just a 10-minute walk from Hornstull subway station. A prison island from the 18th century until 1974, it has now been transformed into a peaceful, car-free spot perfect for relaxing and taking in the views over Riddarfjärden and Gamla Stan. Rent a kayak, watch entertainment on open-air stages, have a drink in the small café or lie back on the beach and swim in the lake. A popular spot with Stockholmers when the sun is out, walk to the eastern side of the bridge if the beach is crowded and swim from the rocks instead.

Immerse yourself in Swedish drinking culture at Spritmuseum

For an off-beat museum experience, Spritmuseum explores Swedish drinking culture with quirky exhibits and tastings. On Djurgården, the same city island as Skansen and the amusement park Gröna Lund, Spritmuseum includes an exhibition of 850 pieces of Absolut vodka art, pop-up exhibitions devoted to different drinks, a quiz and a good restaurant and bar. The museum also accepts entries to its annual Swedish drinking song championships and archives all submissions. Using smell, taste and music, you can even experience a simulation of being drunk and, inevitably, hungover. Be sure to buy a tasting box at the entrance filled with typical Swedish shots to enhance the experience.

Tour around the city’s rooftops

While most visitors wander Stockholm’s cobbled streets, it’s possible to feel like you have this charming city to yourself if you explore from above. Definitely not the average walking tour, Takvandring offers guided tours of the city and an insight into Sweden’s history from high up on Stockholm’s rooftops. Participants wear a helmet and full-body harness connected to the rooftop rails that many buildings have for clearing away winter snow. Around an hour is spent on the rooftops and some climbing is required, but this is the perfect way to – literally – rise above the crowds and get a new perspective on the city.

Take in the world’s longest art exhibition in the Tunnelbana

There’s no need to shuffle around a gallery to check out some of Stockholm’s best art. Instead, head underground to the city’s metro system, where more than 90 of the 100 stations feature astonishing art installations, statues and murals from more than 250 different artists. Some are tucked away in unexpected places on platforms while some cover entire ceilings, but all are worthy of any gallery. Start at the T-Centralen station which opened in 1957 and was the first station to feature artwork. Jump on and off trains to see more art as you travel: the red and blue lines are the best and Kungsträdgården, Solna Centrum and Stadion are all particularly impressive stations. You can even join a free art tour of the metro to find out more about the work and artists.

Go on a Swedish safari

Just half an hour outside the city it’s possible to feel a world away, enveloped in dense forest and rural land dotted with traditional red cottages, manor houses and Viking rune stones. Go alone or join a tour with Stockholm Adventures which will lead you to the best places to spot animals. You could spot moose, deer, wild boar, hares, beavers and foxes, who emerge at dusk in search of food and water. Afterwards, dine al fresco in the forest for a typical Swedish midsummer meal including herrings, boiled potatoes, meatballs, sausages, local cheese, fresh berries and lingonberry juice.

Hunt for bargains at flea markets

Stockholm is a dream for vintage lovers. In the summer, the Blasieholmstorg market is in the very centre of the city and heaped with antiques, while Hornstull’s market is held every Sunday on the waterfront of Södermalm and is great for food trucks. For a truly unique find year-round, search for Eddie’s Flea Market buried deep in Stockholm’s Old Town. This tiny store has been run by owner Eddie for more than 30 years and is a treasure trove of vintage goods. Ask nicely and Eddie may even let you take the spiral staircase down to the cellar, which used to be a prison.

A staple in even the city’s most expensive restaurants, herring is Stockholm’s must-try dish. The fish is usually served with mashed potato or on hard Swedish rye bread as an open sandwich. But there’s no need to break the budget to try it during the summer. Nystekt Strömming is an unassuming cart in Södermalm Square marked by a distinctive yellow fish sign and is the best place to sample freshly caught herring. Try it served on rye with dill and mustard or a less-traditional herring burger.

Have a drink at Stockholm’s grandest rooftop bar

While it’s difficult to miss Stockholm’s elegant Royal Opera House, most visitors don’t realise the building has its own spectacular terrace bar, Strömterrassen. In the summer months, the small balcony is open most of the day for lunch, dinner or just drinks, even if there is no performance taking place. Head through the Opera House and take the stairs up two floors to get there. Then take in the view over the Strömmen waterway and the Royal Palace. On Fridays and Saturdays, the terrace transforms into an outdoor summer club with visiting DJs for a really special night out.

Although only moments from the city centre, Stockholm’s Karlberg Palace is rarely visited by city-goers, who flock to the Royal Palace instead. Built in 1634, the neoclassical castle was a temporary home for the King when the royal castle, called Three Crowns, burned down in 1697. Today, the castle itself is the home of a military academy so is not open to visitors, but the extensive and beautiful grounds are free of charge for the public to explore. Take a picnic or roam the gardens to spot Viking runestones, the Temple of Diana and even the grave of King Charles XII’s dog Pompe, buried in 1699.

Have a picnic with a view over the city

A 10-minute walk from Slussen at the eastern tip of Södermalm is Fåfängen mountain, a favourite picnic location for savvy Stockholmers. Look for the flags, then take the wooden stairs up the cliff to find a spot to sit. Once there, look out over Stockholm’s pretty rooftops and the sea to Djurgården island and Gamla Stan. Brunch is served year-round at weekends in the café there but a picnic is the best way to enjoy the most magnificent view in Stockholm.