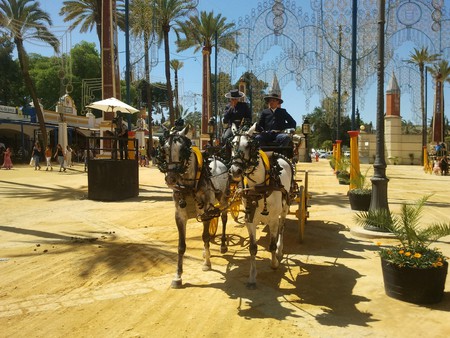 Andalusian horses are one of the finest equestrian breeds in the world and are the centrepiece of the annual feria of Jerez (it is called the ‘Feria del Caballo’, or ‘Horse Fair’). They have always been at the heart of this week-long celebration, the history of which stretches back some 700 years. During the reign of Alfonso X ‘El Sabio’ (‘The Wise’) in the latter half of the 13th century, farmers would come to the fair to trade livestock, in particular horses, with local sherry and wine producers setting up little stands from which to lubricate their trading. Nowadays, riders parade up and down the fairground in Jerez showing off these magnificent animals, stopping off at the various refreshment marquees – casetas – for a glass of sherry-on-horseback. This is the most distinctive and charming sight of a feria that is often overlooked in favour of the more famous annual blowout in Seville, the Feria de Abril.

Indeed, Seville’s Feria de Abril – held precisely two weeks after Easter every year – is Andalusia’s biggest feria and now consists of around 1,000 casetas. Undeniably beautiful and fun as this celebration is, the fact that the majority of these party marquees require a personal invitation for entry can make the Feria de Abril difficult for the casual visitor to penetrate. In Jerez, on the other hand, inclusivity is part of the Feria del Caballo’s identity: it was only in 1903 – when the fair moved to its present location – that individuals and organisations were allowed to set up private casetas for its duration. Yet exclusive marquees never really caught on in Jerez, and today all the castetas are open to anyone who wants to drink and dance, creating an openness that distinguishes the Feria del Caballo from the somewhat snobbish Feria de Abril. 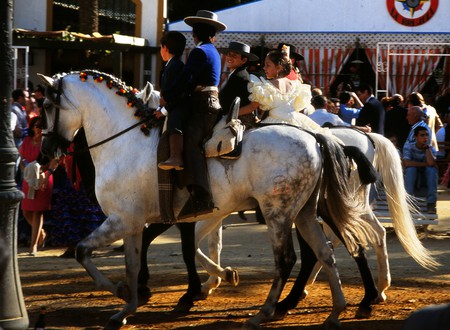 Along with horses, the other cultural emblem of Jerez is sherry – in particular the world-famous Tio Pepe – which is made from the white Palomino grapes grown just outside the city. These fruits are used to produce light, dry sherries such as Manzanilla and Fino as well as darker and more sweet variants such as Oloroso, and their fecundity is celebrated every autumn during Vendimia, Jerez’s grape harvest festival. Both the Vendimia and the Feria del Caballo are fuelled with an ample supply of this locally-produced tipple, the Manzanilla version of which is blended with 7Up to make the fairs’ signature drink, rebujito. A light, refreshing cocktail served over ice and garnished with fresh mint, rebujito is the perfect accompaniment to caseta-hopping in temperatures that are normally around 25 degreees celsius in early May.

If you need a break from the partying at the Feria del Caballo, take some time out to explore one of the most elegant cities in southern Spain. It’s always risky claiming that one great Andalusian city is more attractive than another, especially when one half of the comparison is Seville; but Jerez’s underdog status in the region means that its stately beauty comes as a wonderful surprise, and can be enjoyed in a far less crowded atmosphere than in the Andalusian capital. Catch an equestrian ballet at the Royal Andalusian School of Equestrian Art and take a tour around the cellars of Tio Pepe or Gonzalez Byass, Jerez’s two most famous sherry makers, to immerse yourself in all that’s great about this lovely city. 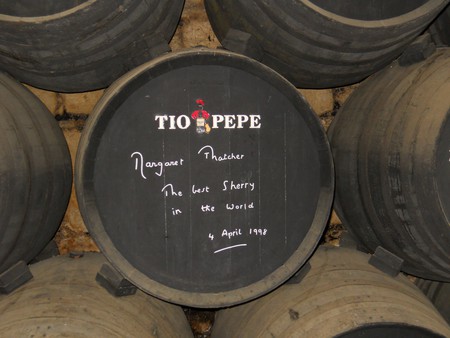 One of the most conspicuous aspects of the Feria del Caballo is how smart everyone looks. Mounted party-goers (of both sexes) wear the traditional riding costume of dark blue trousers and jackets and the distinctive broad-rimmed hats that look like flattened out bowlers. Women who prefer to attend on foot rather than on horseback wear the beautiful flamenco dresses – trajes gitanas, ‘gypsy dresses’ – which transform caseta dancefloors into impressionists’ canvases during the feria’s energetic dancing. Indeed, the joyful, rebujito-fuelled dancing is a spectacle that can be enjoyed (and participated in) in Seville too – but the sight of elegantly-attired riders pulled up outside the marquees, enjoying a sherry on their saddles as colourful mayhem unfolds before them, is distinctive of the Feria del Caballo.

As soon as you set foot on the recinto ferial (the sanded fairground on which the casetas are located) during Seville’s Feria de April, you’re left in no doubt that it’s southern Spain’s biggest fair. The fairground is a mini-city of casetas, which line streets that can be just as crowded as those in the Andalusian capital’s centre. During the Feria del Caballo, on the other hand, you can wander from marquee to marquee on wide boulevards of bright yellow sand, with enormous palm trees swaying gently above you and the fair’s equine stars trotting past bearing finely-dressed riders. The ample amount of space means the recinto in Jerez is less crowded than Seville’s, and the colours – green palm trees, clear blue sky, yellow sand, multi-coloured flamenco dresses and jet-black horses – are simply wonderful. 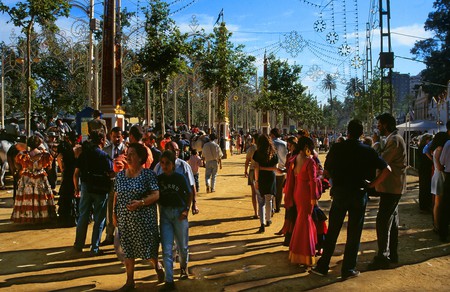 Every adventurer loves the feeling of exploring somewhere off the tourist carousel, immersing themselves in a place overlooked in favour of more famous and familiar locations. Attending the Feria del Caballo in Jerez gives you that experience, because the majority of visitors to Andalusia in the spring head to the the region’s capital for the Feria de Abril. As a result, you hear few foreign tongues as you wander among the colourful, noisy casetas at the Horse Fair – a truly local feria celebrated with all the joy, energy and warmth for which southern Spain is known and loved throughout the world.