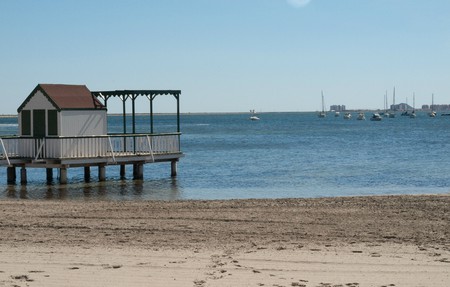 Thought a break away meant you could let your hair down a little? Think again – one resort in Spain has come under fire for bringing in tough new rules for how tourists should behave on its beaches. Here’s everything you need to know.

Police in the seaside town of San Pedro del Pinatar are set to fine holidaymakers for peeing in the sea, in just one of a series of new regulations that have been criticised for their strictness.

The council of San Pedro del Pinatar has so far failed to explain how it will police people answering the call of nature under the waves, but has revealed that the fine for doing so, if caught, will be €800 (US$911). Tourists and locals who play music too loudly, or who reserve a spot on the beach with an umbrella, will face a fine of €750 (US$854).

Other punishable infractions include surfing, having barbecues on the beach, using soap in the beach showers and taking dogs onto the sand.

While bat and ball games and reserving umbrellas might affect tourists in particular, those who live in the area are getting hot under the collar about banning nudism on the beach. Locals are particularly annoyed at the new regulation as the town, located an hour south of Alicante, is home to La Llana beach, which has for many years been a popular nudist destination.

The Spanish Federation of Naturism has even got involved, announcing that it plans to take action against the local council for going against European law.

The restrictions are due to come into force on July 18, with council officials maintaining that the reason behind the new regulations is the “health and safety” of beachgoers, as well as the protection of the local environment.

Mayor Visitación Martínez said she does not find the new regulations “out of the ordinary” and pointed out that other towns have also brought in similar “no peeing” rules.