This Is The Neighbourhood Barcelona Tried To Forget 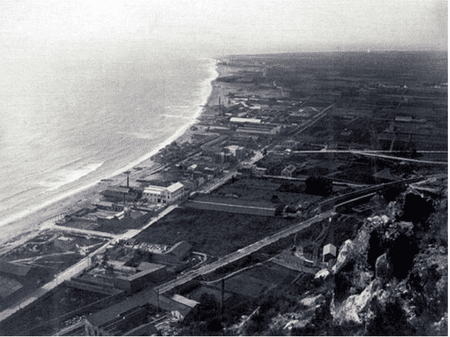 Mention the name ‘Can Tunis’ to anyone who lived in Barcelona twenty years ago and you’ll be sure to get a reaction. Demolished by the local council in 2004 for having become a hotbed of drug abuse and criminality, the area had once been home to a tight-knit community on the fringe of Barcelona. Read on to find out about the history of the neighbourhood Barcelona tried to forget.

The birth of Casa Antuñez

Look down from the Castle of Montjuïc towards the port nowadays, and you will see a vast industrial sea that stretches towards the airport in the distance. It would be difficult to imagine today that there had ever been anything there but containers, cranes and warehouses. Yet, over the last century or so, that corner of Barcelona has been home to everything from bourgeois hippodromes to some of the worst drug dens ever seen in the city.

The origins of what would later be known as Can Tunis can be traced back to the early 18th century when the Antuñez family moved into the area then known as the Marina de Sants. The wetlands were drained for agricultural purposes, and the family built a hostel for travellers and day-workers: the Casa Antuñez. From then onwards a number of factories were built in the area, and a community of workers emerged in what was already by then starting to be called ‘Can Tunis’ – a Catalan evolution of the Spanish Casa Antuñez. 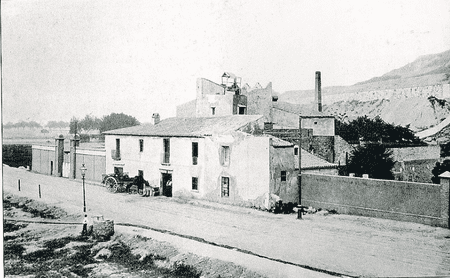 It wasn’t just the working classes who frequented Can Tunis, though. In September 1883, the local equestrian society inaugurated the Can Tunis Hippodrome, which included a racecourse as well as restaurants and a leisure area for Barcelona’s high society. As time passed, the hippodrome was also used for other occasions such as football matches as well as being a practice ground for the city’s budding aviation sector – this is where the first plane to fly in Spain took off from on February 12, 1910.

The changing face of Can Tunis

By the turn of the 20th century, Can Tunis was home to a close-knit, working-class community who identified as belonging to the area. Housing there was precarious and consisted mostly of a shantytown of wooden shacks in which many residents lived in poverty. Despite this, there reigned a sense of community and belonging to the area that even today certain descendants of of Can Tunis residents look back on fondly. 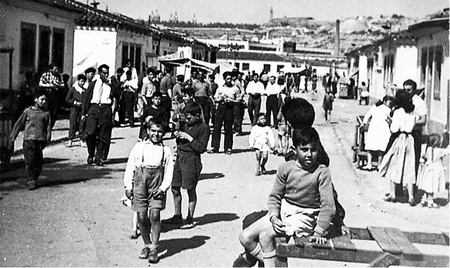 Daily life in Can Tunis Courtesy of Maria Trinidad Vilchez

However, the ongoing industrialisation process and the growing number of factories there gave rise to an increase in immigration, and progressively the social fabric of Can Tunis changed. Farmers and dockworkers were replaced by factory workers, and a growing number of Spanish gypsies moved in to the area. During the Spanish Civil War the port was heavily bombed, and as a result Can Tunis suffered considerable loss and damage. By the mid-century, the neighbourhood had begun to become something of a problem for the local council, and in the 1970s plans were drawn up to create new housing for the residents of Can Tunis. 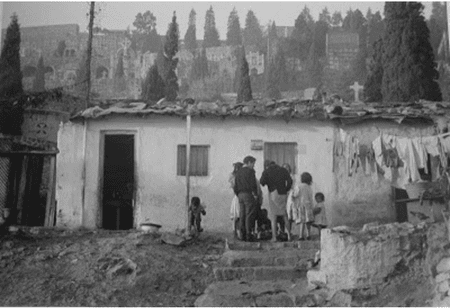 A family in Can Tunis Courtesy of Maria Trinidad Vilchez

The Avillar Chavoros project – meaning ‘Come Children’ in the local gypsy dialect – was designed to rehouse nearly fifty families from Can Tunis. The plan was for the new houses to be built close to Montjuïc so as to eventually enable the port to reclaim the land. However, the transition did not go as smoothly as the council imagined, and many residents resisted the move while those who remained were faced with problems of petty criminality; soon, drug-related violence and illness had become rife. 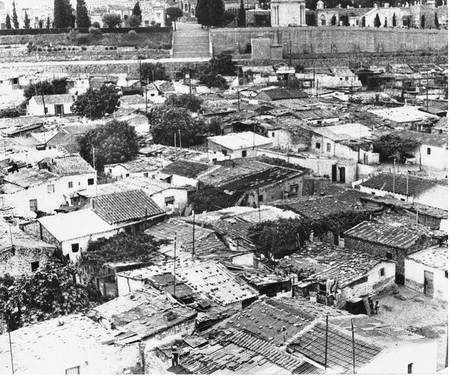 The houses of Can Tunis Courtesy of Maria Trinidad Vilchez

In the 1980s, residents had become used to a new sight as they drove down the Ronda Littoral: the endless stream of drug addicts walking by the side of the road on their way to Can Tunis. The records show that at its worst the neighbourhood was receiving 70% of the needles given out by local charities, amounting to more than 2,500 needles per day.

By then, Can Tunis had become synonymous with a no-man’s land where drug sellers went undisturbed by the local police, children went without school, and life there existed on the the very fringe of society. In 1994, the local council decided to seek a solution to the problem and the decision was made to shut down Can Tunis once and for all. A documentary by Paco Toledo and José González Morandi entitled simply Can Tunis captured the final months of this doomed community.

As before, the few families who still lived in the neighbourhood were in some cases reluctant to leave, despite the council offering new housing and financial compensation. For those who had grown up there, life outside Can Tunis was like a different world and one they weren’t necessarily willing to embrace. However, by 2004 the last families had been relocated and the first stages of the €6 million project to expand the port were underway.

Today, few of the tourists who visit Barcelona each year have ever heard of Can Tunis and as the next generation of locals grows up, the memory of this historic neighbourhood seems doomed to fade. The only hope for those who once called it home is that one day it can be remembered as the thriving working-class community it was in its heyday as much as the destitute drug haven it was in its final days.