"There’s A Lot At Stake In This Movie..." Michael Fassbender On 'Assassin's Creed'

There’s no getting away from the chequered past of video game adaptations on screen. From Mario Bros. to the ongoing Resident Evil series, the leap from console to film rarely manages to succeed. There is, however, understandable optimism that Assassin’s Creed will be able to buck the trend, not least because it boasts Michael Fassbender in the lead role.

In the games, players are tasked with controlling a highly skilled silent assassin across various periods of time. The series is still relatively new, debuting in 2007, although in gaming terms Assassin’s Creed has achieved ‘vintage’ status.

“Even before talking to potential screenwriters and studio partners, we felt we needed an iconic actor to play our assassin,” notes Jean de Riveres, Executive Producer of Ubisoft Motion Pictures. “Michael Fassbender was the obvious choice, he brought both mainstream success and an independent touch to the project. We only went to Michael, no other actor was ever up for the role.”

Fassbender plays Aguilar de Nerha, an Assassin who lived in Spain during the Spanish Inquisition of 1478. But for much of the movie, he also plays a modern-day character, Callum Lynch. Cal is a death row convict who is spared the lethal injection by a company, Abstergo, that offers him a chance to experience the life of his ancestor using a machine called the Animus, which works by tapping into his genetic memory.

Michael Fassbender (Shame, Inglorious Basterds) takes up the story and tells us how the concept gripped him.

“It feels like two different movies in a way,” he noted in regards to the switching between two time periods and characters. “Aguilar is definitely part of a family, and he believes in the Creed. Cal is somebody who’s much more of a drifter, having been in and out of correctional facilities for most of his life. He doesn’t believe in much.” 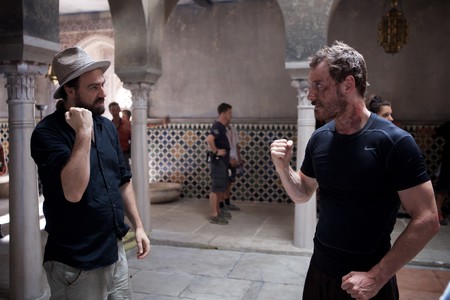 Finding a director with vision enough to realise both of these time periods was a big challenge. In the end, it was Fassbender who suggested a director he’d worked with previously on a feature film adaptation of Shakespeare’s Macbeth; Justin Kurzel. “Justin just has incredibly good taste,” said Fassbender. “He’s got a good feel for material and he’s strong and bold in his choices. There’s a lot at stake in this movie, and that comes across with Justin.”

Assassin’s Creed will be released in the UK on January 1, 2017