The Most Scenic Cycling Routes in Seville 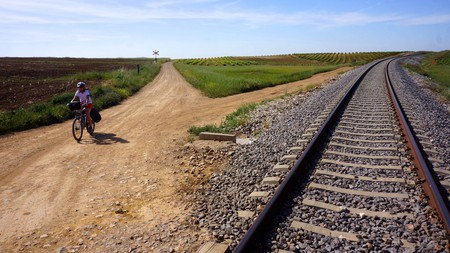 Although perhaps not the first destination that comes to mind when you think of cycling holidays, Seville and the surrounding area offers some great biking. From the extensive inner-city tracks that have made it one of Europe’s great bicycle cities to the longest stretch of the Camino de Santiago pilgrimage, here are the most scenic cycling routes in and around Seville.

Over recent years, the eastern bank of the Guadalquivir – the river which splits Seville in half before flowing out into the Atlantic at the Bay of Cádiz – has been extensively re-developed. The result is a wide boulevard that’s flanked with grassy banks (popular spots for outdoor drinking and picnics) and trees that provide welcome shade. It is a wonderful place to take a leisurely cycle – providing it’s not too hot – whilst admiring the colourful facades of Triana, Seville’s former gypsy neigbourhood, on the other side of the river.

An ambitious project by local authorities has seen over 50 miles of bike lanes open in the Andalusian capital over the last few years; as a result, cycling in Seville has increased 11-fold. Not only does this initiative provide locals with a pleasurable and environmentally friendly commute, it also offers tourists a great way to get to know this beautiful city. After hiring a ride from one of the bike-hire stations operated by Sevici, you can explore all but the narrowest lanes of Santa Cruz by using this extensive network, which is clearly signposted all over the city. 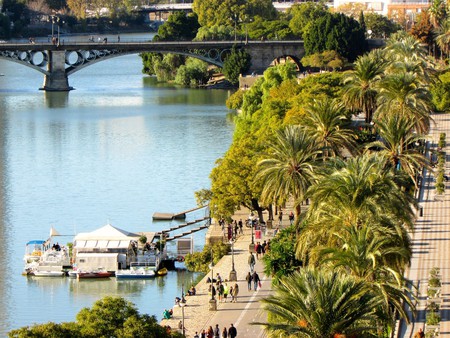 Park, Train Station
Facebook
Email
Twitter
Pinterest
Copy link
Share
Map View
The Sierra Norte national park is located 30 miles to the north of Seville – or about a 40-minute drive – and offers some of the province’s most scenic cycle paths. The best route is the Via Verde (appropriately, the”Green Way”) which starts near the train station in the charming whitewashed village of Cazalla-Constantina and follows the path of an old railway track for twelve miles through some of the park’s most attractive scenery. Whilst riding, keep a look out for Sierra Norte locals such as otters, wild boar, fallow deer, vultures and eagles.
Open In Google Maps
Vereda de las Moreras, San Nicolás del Puerto, Andalucía, 41388, Spain
Visit Website
Give us feedback

Launched by a group of Andalusian cycling enthusiasts in 2000, the TransAndalus is an epic, 1,240-mile cycle route that runs through all of Andalusia’s eight provinces. But if undertaking such a monster ride – which makes the Camino de Santiago look like a Sunday morning stroll – isn’t realistic during your trip to southern Spain, you can just ride the Seville section of the TransAndalus, or parts of it. The most scenic stretches lead you through the wild plains and whitewashed mountain villages of the Sierra Norte national park, of which Alanís and Cazalla de la Sierra are two of the most attractive. 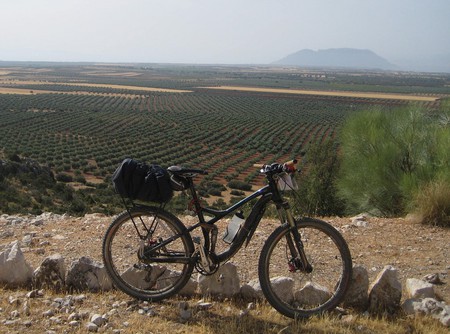 For cyclists looking for a challenge, the Via de la Plata (“Silver Way”) is the longest of all Spain’s Camino de Santiago routes. It starts in the Andalusian capital and continues through Extremadura and Castille y Leon for 620 miles, taking pilgrims through some of the country’s most extraordinary landscape before arriving in Galician capital of Santiago de Compostela. But if you feel that’s a little too much for a daytrip, the path also offers plenty of opportunities for leisurely cycling, as the terrain immediately north of the city is flat and undemanding.

For some of Seville province’s most lovely biking, head about 40 miles north of the city to the valley that surrounds the Rivera de Cala river. A particularly enjoyable circular route around this verdant valley is recommended by Wikiloc – an excellent resource if you’re planning a trek or bike ride anywhere in the world – and starts from the town of Real de la Jara on the border of Seville and Huelva. It runs for just under nine miles and is easily doable in a day. And in order to better enjoy the untamed landscape, pack a picnic lunch and stop wherever takes you fancy along the way.

Cycle out to surrounding towns and villages

If you’re hiring a bike for the day in Seville but fancy getting away from the heat and crowds, there are plenty of beautiful towns and villages surrounding the city to visit with two wheels. There are some good routes around Camas, which is situated on the western bank of the Guadalquivir a few miles from the city, whilst a little further away (23 miles from Seville, to be precise) El Garrobo on the Via de la Plata is well worth exploring. Otherwise, just follow the river out of the Andalusian capital and see where it takes you. 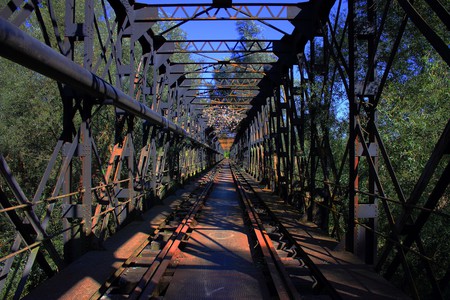