The Most Impressive Buildings in Málaga, Spain

Malaga's Roman theatre | © Andrew Nash/Flickr
The beautiful port city of Málaga is not short on ancient and impressive structures with which to vow visitors. From its stunning Moorish fortress – the best-preserved of its kind in Spain – to its Roman amphitheater, this vibrant and exciting city is full of architectural masterpieces to explore and admire.

Cathedral, Church, Mosque
Málaga's cathedral is known as the 'One Armed Woman' due to its uncompleted second tower | © Andrew Wilkinson/Flickr

Málaga’s great cathedral, one of the city’s most impressive monuments, is known locally as ‘La Manquita’, or ‘The One-Armed Woman’, due to its uncompleted second tower. Built between 1528 and 1782 near to the site of an early Almohad mosque, original plans for this huge Renaissance and Baroque-style cathedral had included two towers, but the second was never built because of a lack of funds. Construction dragged on for over two hundred years before the Mayor of Málaga commissioned Aragonese architect José Martín de Aldehuela (1729–1802) to finish the cathedral off in the late 18th century. Aldehuela’s other iconic contributions to the province include Ronda’s stunning ‘New Bridge’ and bullring.

The Moorish rulers of southern Spain built the Alcazaba fortress on the remains of a Roman fortification around the middle of the 8th century. Though it doesn’t have the grand interiors of its more famous counterpart in Granada, this amazingly preserved fortress is every bit as beguiling as the Alhambra and is well worth setting aside a good couple of hours for: indeed, it is the best-preserved Moorish citadel in Spain. The fort was extensively rebuilt by the Sultan of Granada in the 11th century and connected up to the nearby Gibralfaro Castle by a Nasrid King in the 14th century. One of the most notable features of the Alcazaba is how effortlessly it fits into the hillside above Málaga, while inside it is a maze of secret courtyards, open-air corridors and battlements that command incredible views out to sea and over the city’s rooftops.

Built in the 10th century by the Caliph of Cordoba, this formidable hilltop castle was enlarged in the 14th century by the Sultan of Granada. Walking along the length of its turrets, you can survey the ocean and the surrounding landscape for miles and miles; no wonder, then, that the Catholic Monarchs Ferdinand and Isabella needed three months to take the castle from the Moors in the famous Siege of Málaga in 1487 – and even then, they won only because their besieged foes ran out of food and water. Like the Alcazaba, to which it was connected in the 14th century, the Gibralfaro is exceptionally well preserved, and has been expertly restored where necessary, enabling you to understand why it was once considered the most impregnable fortress in mainland Spain. 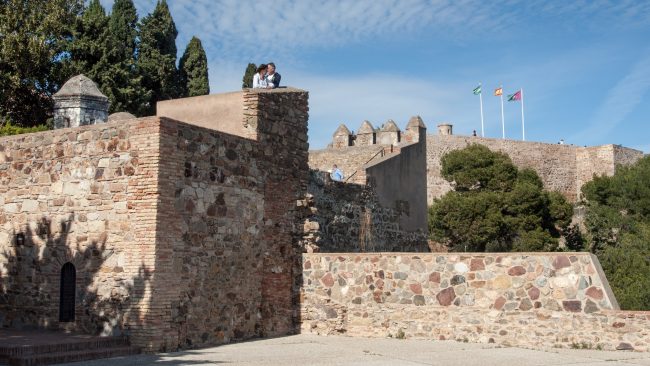 Building, Museum
Málaga port's stunning 'Palm Garden of Surprises' | Málaga port's stunning 'Palm Garden of Surprises'
OK, so it’s not technically a building, but no article on Málaga’s key architectural attractions would be complete without mention of its breathtaking port. In recent years the oldest continually operated port in Spain has been transformed into one of the most aesthetically pleasing parts of the city, mainly with the addition of the tropical ‘Palm Garden of Surprises’ along the promenade. At the far end, near Málaga’s historial bullring, is the Pompidou Centre – Málaga’s answer to the famous Parisian gallery, topped with a giant, multi-coloured cube – and the Paseo del Muelle Uno, a lively thoroughfare lined with bars and restaurants that leads to the beach. Thanks to its stylish and costly facelift, this is now a great area for an early evening stroll, or from which to watch the enormous cruise liners come and go on their voyages around the Mediterranean.
More Info
Open In Google Maps
s/n Pasaje Doctor Carrillo Casaux, Málaga, Andalucía, 29016, Spain
+34951926200
View menu
Visit website
Visit Facebook page
Send an Email
Give us feedback

Málaga’s Roman theatre is the oldest monument in the city and one of the few remaining Roman structures in Andalusia. Its location at the foot of the Alcazaba makes this part of Málaga’s centre one of the most historically significant sites in southern Spain. Built during the 1st century AD, the theatre was in use until the 3rd century AD, after which it fell into misuse until the Moors settled in Málaga in the 8th century. They showed little respect for this once-magnificent place of entertainment, and plundered it for material with which to build the Alcazaba. Only in 1951 was it rediscovered, during the construction of an arts centre, and it opened to the public only in 2011 after a complicated and lengthy restoration. Now it once again stages concerts and plays and features an informative visitors’ centre. 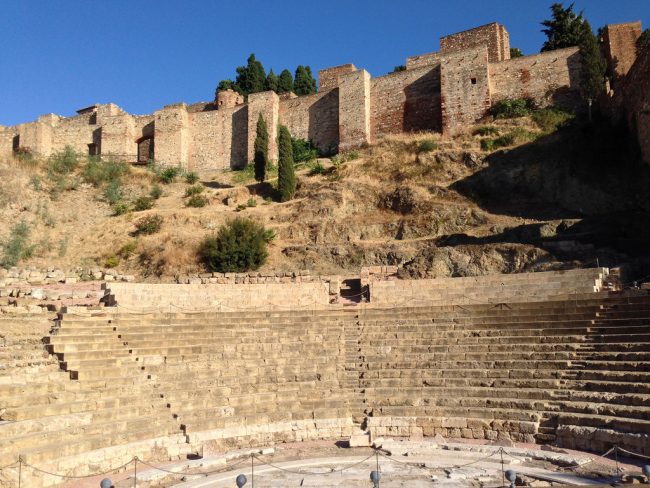 The best views of Málaga’s attractive 19th-century bullring are from the turrets of the Gibralfaro castle, from where you can see it tucked in amongst high-rise apartment blocks just a stone’s throw from the sea. Work on this understated, elegant plaza began in 1874 and it staged its first bullfight two years later; nowadays, it is one of the the most important bullrings in Andalusia and holds prestigious bullfights during Easter and throughout Málaga’s riotous August fiesta. Tours of the ring are available, and it also houses a museum exploring the history of the controversial spectacle that takes place within.

Málaga’s bullring, as seen from the Gibralfaro castle © Martin F/Flickr
Book with our partner and we will earn a small commission.
Give us feedback