The Most Beautiful Buildings in Girona 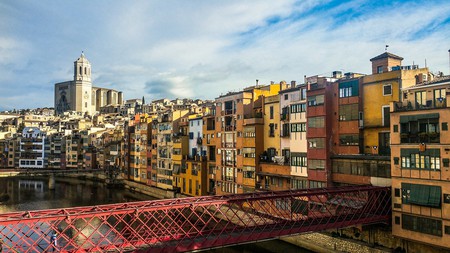 The historic Catalan city of Girona is known for its well-preserved Jewish quarter, unique history, festivals and, of course, its architecture. Here are some of the city’s most beautiful buildings, from monasteries and cathedrals to old hospitals and ancient Arabic baths.

Banks of the River Onyar

Building
Facebook
Email
Twitter
Pinterest
Copy link
Share
Map View
Not just one building, but a whole series of them – the citrus coloured houses lining the banks of the River Onyar are without a doubt one of the most stunning views found in the city of Girona. Built in the 19th century, they hang over the river and sit along where the old medieval city wall used to run. Visitors can even enter one of the houses to look around – the Casa Masó, former home of the local architect Rafael Masó (1880–1935). 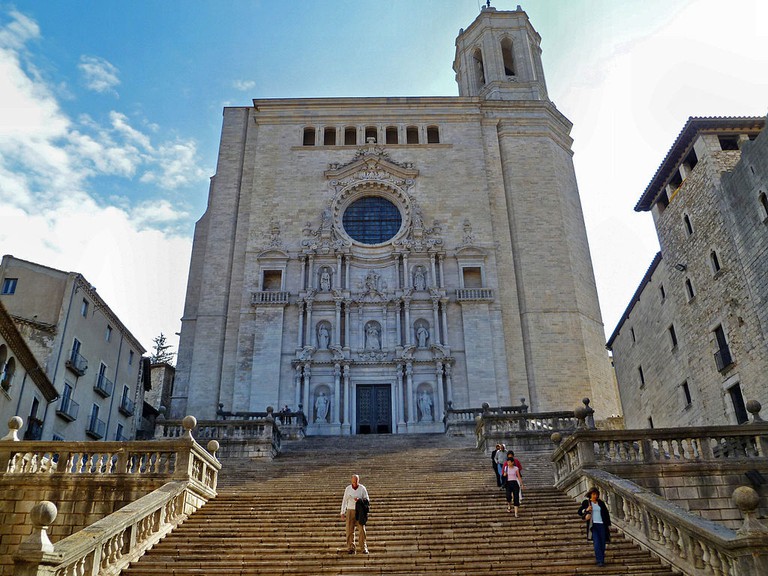 Girona Cathedral | ©Georges Jansoone / Wikimedia Commons
One of the most famous buildings in the city is, of course, the Girona Cathedral, which took almost seven centuries to complete. It mixes various architectural styles, such as Gothic and Romanesque, and also has the widest Gothic nave in the world. The Cathedral was thought so beautiful, in fact, that it was a filming location for much of series six of Game of Thrones. Remember when Queen Margaery was preparing for her walk of atonement or when Jamie Lannister rode up those steps on horseback? Yes, that was all filmed right here in front of Girona Cathedral.

Girona’s Arabic Baths, built in the 12th century, are actually some of the most beautiful Moorish-inspired baths in the whole of Spain. With their ornate slender columns, tranquil pools and star-shaped skylights, they are quite a sight to behold. The baths are made even more beautiful each May during the Temps de Flors Girona Flower Festival when floral blooms cover the area. These too were featured in Game of Thrones. 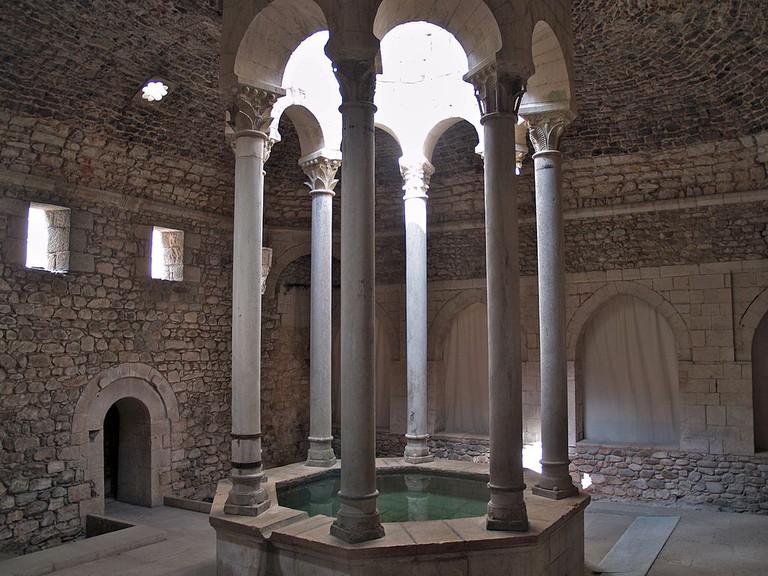 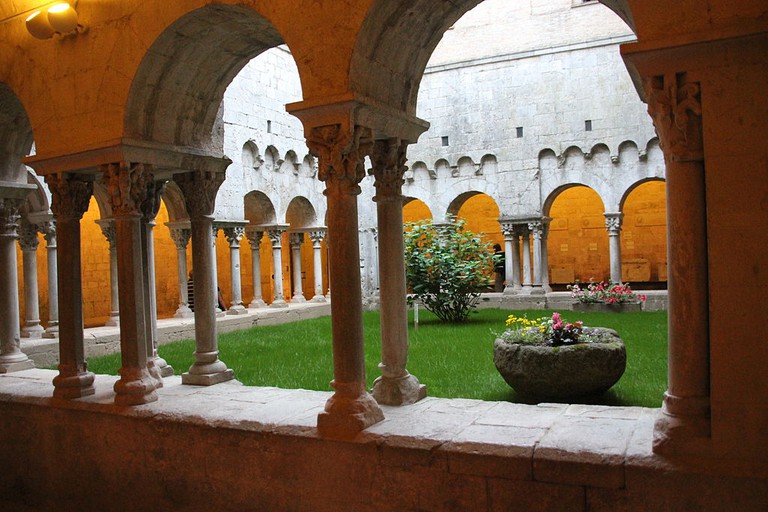 Cloisters of Sant Pere Galligants monastery, Girona | ©Arnaugir / Wikimedia Commons
Girona may be small, but it is home to a number of different monasteries, the most spectacular being the Monestir de Sant Pere de Galligants. The most spectacular example of Romanesque architecture in the whole of Catalonia, it was built during the 12th century. This monastery too was thought Game of Thrones-worthy and was one of the few buildings where scenes were shot inside. 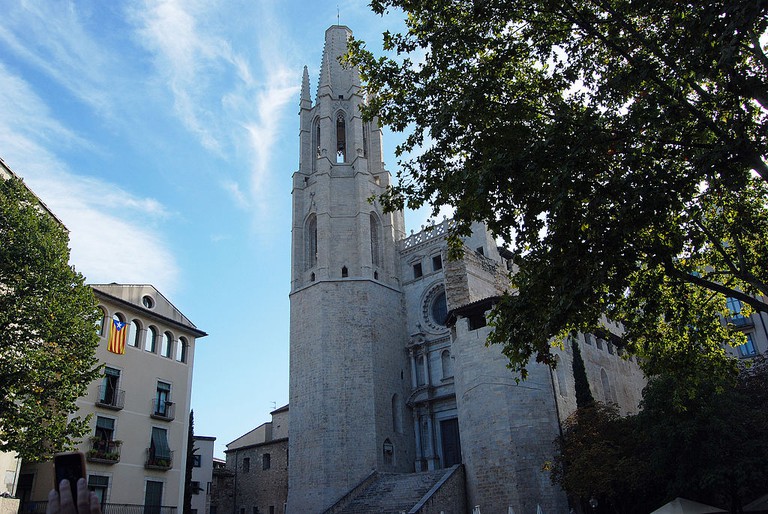 Basilica de Sant Feliu, Girona | ©Harvey Barrison / Wikimedia Commons
Girona’s first cathedral was not the current one; it was, in fact, the Basilica de Sant Feliu, which is from the early days of Christianity. However, the present-day structure, with its slender bell tower, Gothic nave and elegant baroque façade, dates from the 13th to the 18th centuries. It is a stunning piece of architecture. 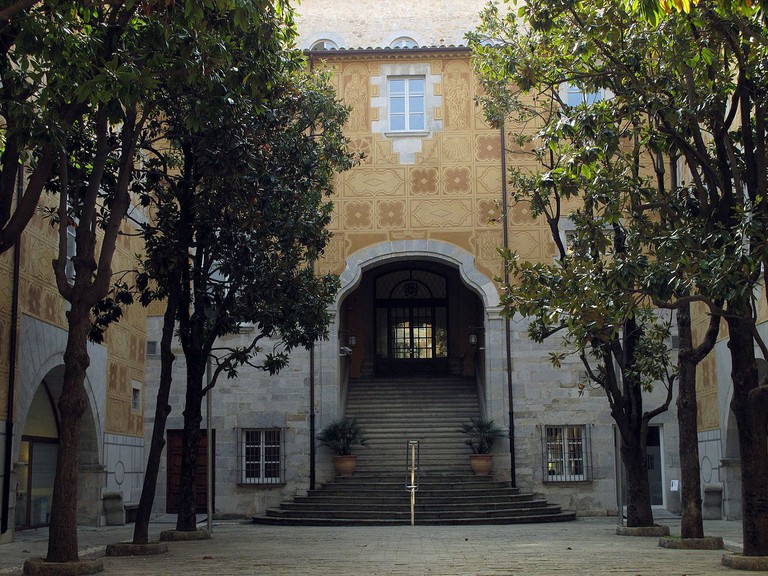 Antiguo Hospital de Santa Catalina, Girona | ©Enric / Wikimedia Commons
A classic piece of Catalan architecture not often seen in Girona, but more common in Barcelona, is the Antiguo Hospital de Santa Catalina – a working hospital from the 17th century until the beginning of the 21st century. Decorated in Modernista floral motifs and elegant arches, the structure currently houses part of the Catalan government. Tourists who want to tour this gorgeous building, built in 1666, can organise visits via the Girona Museum of Art.
Give us feedback