The History Of The Alhambra In 1 Minute

One of the most popular tourist sights in Spain, the Alhambra is an ancient palace and fortress on the outskirts of the southern town of Granada in Andalusia. Constructed by the Moors who invaded the country from the 8th century onwards, it is a fine example of the hybrid style known as mudéjar art and a powerful symbol of Spain’s multicultural past.

The first signs of construction date back to at least the Roman times and can be attributed to the site’s advantageous position with good visibility of the surrounding area. However it wasn’t until the 14th century that the foundations of the Alhambra as it is known today were laid. Since the 8th century, Spain had been invaded by the Moors who had successfully established emirates and caliphates in most of the major provinces. It was in the mid-13th century that the Moorish emir Mohammed ben Al-Ahmar commissioned the palace’s construction, which was eventually turned into a royal palace by Yusuf I Sultan of Granada in the mid-14th century. The palace was designed in the typical fashion popular among Muslim rulers on the peninsula at the time, featuring the presence of horseshoe arches, arabesques and calligraphy. 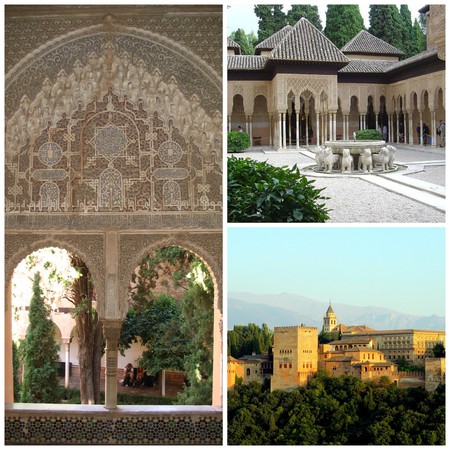 However, soon the Moorish rule came to an end as the Spanish Kings launched the Reconquista and reclaimed their land. In the year 1492 the Emir of Granada surrendered the Emirate of Granada to the Catholic Kings of Spain, King Ferdinand II of Aragon and Queen Isabella I of Castile, who soon made it the home of the Royal Court. Under Christian ownership the Alhambra underwent significant refurbishment and restructuring in accordance with the Renaissance style of the time. The structure grew into the large complex of rooms, palaces, courtyards, chambers and gardens that visitors can admire today. The parks and gardens that surround the edifice are a testimony of its multicultural past: the roses, myrtles and orange trees planted by the Moors contrast beautifully with the lush forest of English elm trees offered by the Duke of Wellington in 1812. The Alhambra has been inscribed on the UNESCO World Heritage List since 1984 and has inspired a number of references in local culture.