The Foods You Must Try When Visiting Madrid 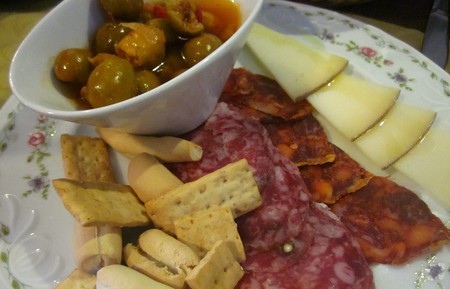 Madrid is a city for foodies | © Lori Zaino

Madrid is heaven for foodies, thanks to its unpretentious food scene filled with hearty, savory dishes. Madrileños love to eat and mealtimes are never skipped. Expect long lunches and dinners, filled with conversation, good wine and of course, plenty of signature dishes. Here’s a list of foods you just can’t miss when visiting Madrid.

Madrid’s most delectable breakfast (or late-night snack) can be found all winter long at street stands and in many bars and cafés around the city: chocolate and churros. These crispy, deep-fried sticks of dough are lovingly dipped into mugs filled with thick, steamy chocolate. This plate is so rich and delicious that even most locals won’t be found eating it daily – instead, it’s saved for a weekend breakfast or special occasion. 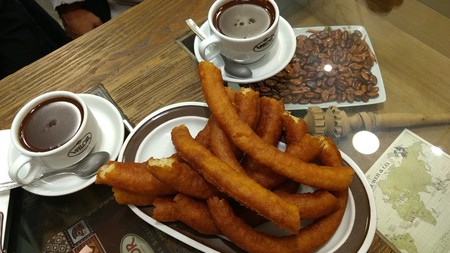 A sandwich of calamari on baguette bread is among the most typical of ‘fast’ foods in Madrid. Commonly picked up on the go near the Puerta del Sol, this simple sandwich is best paired with a caña – a small beer – or several.

Vegetarians should probably avoid Madrid, as its most beloved food is ham. While Madrid locals eat pretty much every single part of the pig (the hooves, the intestines, the ear and more) the aged, dried and salted Iberian Serrano ham is quite possibly Madrid’s most famed delicacy. You’ll see legs of these hams hanging in bars, markets and restaurants around the city, and slicing the ham into thin, edible slices is actually an art. In fact, you can even sign up for classes and demonstrations on ham-cutting. Buying a leg of your own will cost you anywhere from 50-1,000 euros, and rumor has it that the pata negra, or the ham with the black hoof, is among the best. Order a plate of ham (available at pretty much any restaurant in the city) and you’ll soon see what all the fuss is about. 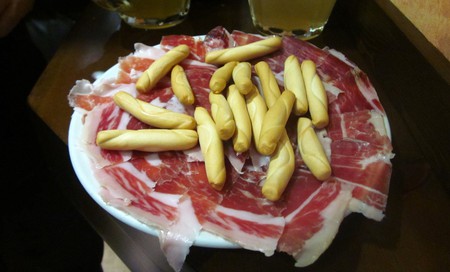 Starting to see a trend here? Most of Madrid’s best cuisine is simple and basic: cheeses, meats, and let’s not forget eggs. The potato omelette is simply an omelette with sliced potatoes. Onions optional, this dish isn’t eaten for breakfast, it’s eaten for dinner, or even sliced and added as a sandwich filler. Bring on the carbs! The dish is basic, but the art lies in flipping the omelette in order to cook both sides evenly, using the frying pan and a plate. If you can do this without ruining the omelette, breaking the dish, or burning yourself, you can consider yourself a master Spanish chef.

Another basic yet delicious dish, potatoes with bravas sauce are simply freshly cut potatoes fried and covered with a red sauce, similar to ketchup but slightly spicier with a bit of tang. These are typically put on a large plate in the middle of the table and shared among friends. Make sure to use a fork when eating these, as picking them up with your fingers will seem rude. 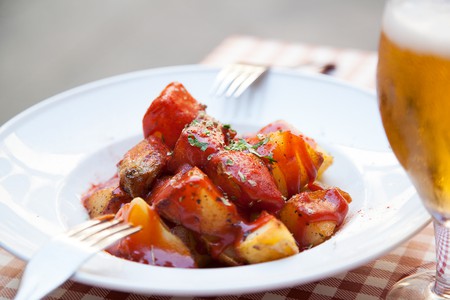 While Madrid has many types of cheese to offer, a plate of cured manchego, drizzled with olive oil, is the most typical. The cheese comes from sheep and must be aged for 60 days to two years to bear the official manchego name. It’s not uncommon to have an entire meal consist of ham, manchego cheese and bread, though not in a sandwich form. With each item placed on its own plate, feel free to make a DIY sandwich: add a slice of ham over a slice of Manchego onto a thickly cut piece of baguette – and prepare to be wowed.

A homemade thick stew, this is best eaten in the home of a Spanish grandmother who’s been making this stew her whole life. Definitely a comfort food, the dish is made with chick peas and various meats and vegetables, including lard, chorizo and morcilla (blood sausage). You can also order it in typical Spanish restaurants. Cocido is best eaten in the winter when you’re starving and need to warm up, and make sure to allow time for a nap afterwards. 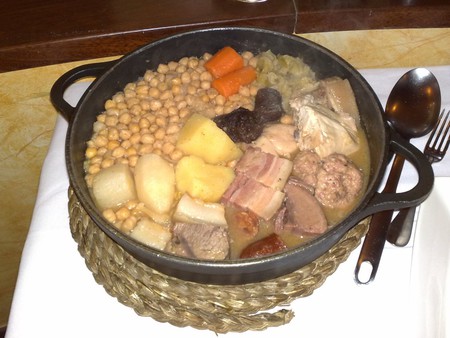