The Evolution of FC Barcelona's Anthem 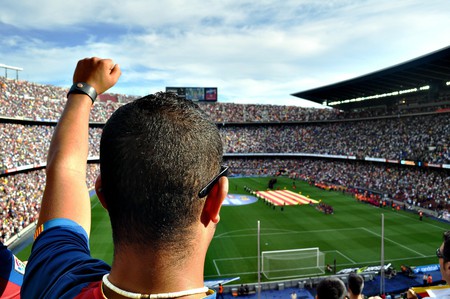 Barcelona's anthem is sung by fans before every match | @damonify/Pixabay

If you’ve ever attended an FC Barcelona match or watched one on television, you might have noticed a song that is always played before the players run onto the pitch. It amps up the crowd, with fans singing along proudly. This is FC Barcelona’s anthem, El Cant del Barça.

Unlike the Spanish national anthem, which does not have lyrics, Barça’s anthem, premiered on November 27, 1974 to mark the club’s 75th anniversary, has two verses of lyrics, all in Catalan.

The first match the anthem was sung at was between Barcelona and the East German National team.

It was a grand affair; a choir of 3,600 singers conducted by Oriol Martorell belted out the song.

The lyrics were written by Jaume Picas and Josep Maria Espinàs and the music composed by Manuel Valls Gorina.

We’re the blue and claret supporters

It matters not where we hail from

Whether it’s the south or the north

One flag unites us in brotherhood.

Blue and claret blowing in the wind

We’ve got a name that everyone knows:

United we are strong.

We’ve achieved much over the years,

That no one can ever break us.

Blue and claret blowing in the wind

We’ve got a name that everyone knows:

The anthem is sung in Camp Nou before every FC Barcelona match just as the players walk onto the pitch. Is it also commonly sung to celebrate important wins.

Fitting with FC Barcelona’s worldwide fan base, there are several international versions of the anthem, as well as several musical styles, from rock (below) to samba.

It shows just how popular the current El Cant del Barça is that no one has thought to write another anthem in 44 years. But before that, the anthem changed quite often.

While El Cant del Barça might be the most famous of the club’s anthems, it is not the first. FC Barça’s first official song was premiered on July 17, 1910 during an end of season match between Barcelona’s first and second teams. The song was composed by José Antonio Lodeiro Piñeros of the infantry regiment Alcántara No. 58.

A second anthem was premiered on February 25, 1923, this time with lyrics. It was performed by the Orfeó Gracienc music school and composed by Enric Morera with lyrics by Rafael Folch i Capdevila. The grandiose and patriotic lyrics emphasise the relationship between sport and homeland.

Another anthem, Barcelona sempre amunt! was premiered in 1949 for the 50th anniversary of the club. Controversially for the time (Spain was ruled by Francisco Franco who had almost completely banned the use of regional languages in the country), it was written in Catalan by its composer, Esteve Calzada.

The fourth club anthem was written in 1957 with lyrics written, again in Catalan, by Josep Badia. Himne a l’Estadi (Stadium Anthem) was dedicated the Camp Nou which opened the same year. This anthem continued to be used until El Cant del Barça was written in 1974.