The Different Ways to Order a Beer in Spain 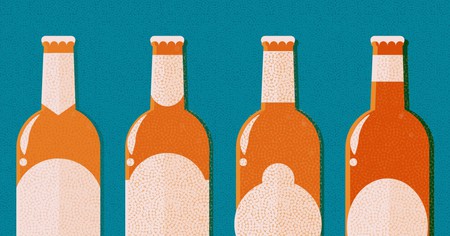 While Spain’s wine industry is going from strength to strength, it is beer that has always been the drink of choice for many Spaniards – a thirst-quenching tipple in the hot summer months and an ideal accompaniment to tapas.

Spain is a beer-loving country and employs the second largest number of people in beer industries in Europe, after beer behemoth, Germany. In 2016, each Spaniard drank, on average, 46.4 litres of beer.

The country even welcomed its very first beer spa last year. The spa, in Granada, southern Spain, offers beer massages and baths to its clients.

But ordering a beer in Spain can be a little more complicated than una cerveza, por favor.

One of the most common beer orders in Spain, a caña is a small glass of beer, usually slightly smaller than the British half pint. One reason for its popularity is that the smaller size means the beer stays cooler in the summer – so ditch your typical pint (pinta) for this local fave.

Roughly double the size of the caña, the actual size of a ‘double’ can differ depending on the type of glasses a bar uses. This is the one to go for if you want a more substantially sized drink.

Spaniards rarely, if ever, ask for una botella de cerveza (a bottle of beer), instead, preferring to be a bit more specific with their order. One of the most common ways to order a bottle of beer is to ask for un tercio, or a 330ml bottle.

This cute little bottle, also referred to as a botellín, is one that holds a fifth of a litre. It is commonly found in cubos (buckets) of beer offered by many chains and bars in Spain.

Slightly confusingly, una jarra (pronounced hah-ra) can refer to both a tankard-sized glass of beer and a jug of beer brought with separate glasses to share with a group. You can usually tell by the context, or what other patrons are drinking, which jarra the bar offers.

This refreshing summer staple is a beer shandy made up of half beer and half Fanta lemon (con limón) or lemonade (con gaseosa).

Most bars offer this alcohol-free beer, which literally means ‘a beer without’. Many of the big brands, such as Mahou, make their own alcohol-free versions. 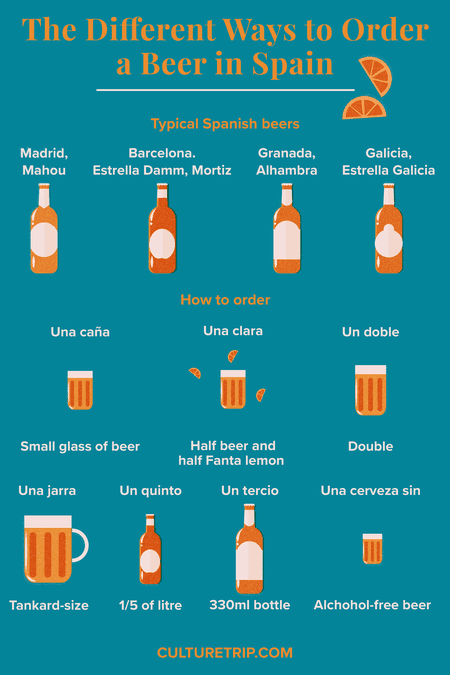 As well as ordering the kind of glass or bottle of beer you would like, you might also be asked which brand. More often than not, though, bars have one particular brand on tap. Which brand usually depends on location, with different regions sticking to their locally-brewed beers.

Founded in Madrid in 1890, this is the most common draft beer in the Spanish capital.

Both labels are popular in Barcelona, with Mortiz being the only Spanish beer with a label written entirely in Catalan.

Unsurprisingly, this beer, named after Granada’s epic Moorish fortress, is the most popular in the Andalusian city and the wider region of Andalusia. It was the region’s first brewery.

Brewed in A Coruña, in northwest Spain, this is a popular choice in Galicia.