The Coolest Neighbourhoods in Valencia 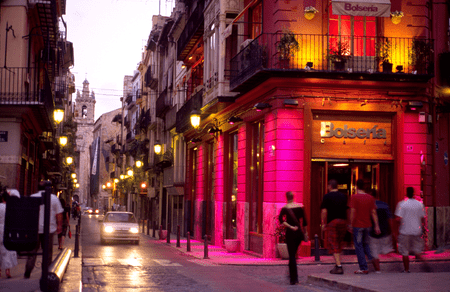 The city of Valencia is made up of dozens of districts and hundreds of tiny neighbourhoods, but the majority of the most interesting sights and exciting nightlife are concentrated in just a few parts of the city. If you only have a short time to explore, or need some inspiration to get you started, here’s our pick of the most unique parts of town that you just can’t miss on your trip to Valencia.

The Ciutat Vella, or Old City, district is a compact, easily walkable area that contains many of Valencia’s most famous sights, including the Cathedral of Valencia, the Llonja and the Central Market. The district, once a walled city, is made up of five small, interconnected barrios, or neighbourhoods. The best known of these is El Carmen, a rough and ready part of town in the northeast part of the district. The neighbourhood is a real mix of old and new; the pretty cobbled streets and squares are home to numerous museums, as well as countless cool cafés and vintage fashion boutiques, and you’ll find street art on every corner. It’s also one of the most popular nightlife spots in the city; you’ll find all kinds of bars, clubs and great live music venues centred around the street Calle de Caballeros.

Said to be the oldest and most central neighbourhood in Valencia, this neighbourhood in the Old City is where you’ll find the Cathedral of Valencia, and the oldest museum in the city, Sala Capitular, famously home to the Holy Chalice of Valencia. This area, next to El Carmen, is also the location of two of the city’s most famous squares, the Plaza de la Virgin and the Plaza de la Reina. This area is within very short walking distance of all the Ciutat Vella’s main sights. It’s the heart of tourism in Valencia, and the area where you’ll find the most souvenir shops, tour operators and accommodation of all kinds. As you might expect it can get busy in summer, and is fairly lively all year round. 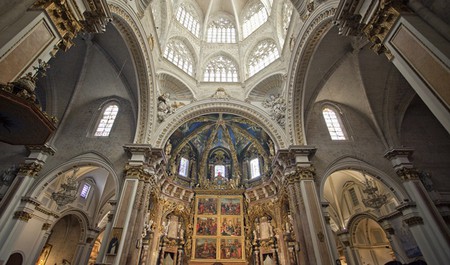 The name of this central neighbourhood, which is really an entire district, is Catalan for “the widening” or “urban expansion”. This is the “new” (having been built in the 19th century) extension to the Ciutat Vella district immediately to the north. This mostly commercial area begins at the city’s main shopping street of Calle de Colón, which is packed with international high-street names, and reaches down towards the Bullring and the main train station, Estacion del Nord. Venture south to find designer boutiques and upscale restaurants, plus the revamped Colón market hall, which today no longer contains market stalls but instead houses several very chic (if nearly identical) café bars serving up high-quality coffee and snacks. Towards the Turia riverbed, you’ll find the lively Canovas neighbourhood, known as one of the city’s main nightlife areas. The whole district is bisected by the broad, elegant Gran Via Marques del Turia, and characterised by modernist buildings and a more grid-like layout, a relief after you’ve wandered the tangled maze of streets in the Old City.

A short walk south of the train station, you’ll find the ultra-cool, rapidly gentrifying district of Ruzafa. Once known as a rough part of town, it’s now the main hipster hangout area replete with experimental art spaces and cupcake-centric bakeries. You can find almost anything here, with everything from charity shops and vegetarian cafes to slick gin joints and modern galleries. The main sight (and foodie attraction) is the colourful Ruzafa market building, but the main appeal of this area lies in wandering the streets and soaking up the atmosphere, or grabbing an outdoor table at a café and watching the colourful characters go by. After dark, people come from all over the city to enjoy some of the best night spots in town.

The studenty, multicultural neighbourhood of Benimaclet is home to several university buildings and has great transport connections to the centre, all of which helps make it a popular nightlife area packed with all kinds of restaurants, bars, concert venues and much more. The main church square is a meeting place for residents and focal point for festivals. The charming old streets around here remind you that, not so long ago, this neighbourhood used to be a separate town, only officially absorbed into the city of Valencia in 1972.

The wide, sandy city beach, Playa Las Arenas, is just a short metro or tram ride from the city centre. Directly behind it you’ll find the old fisherman’s quarter of El Cabanyal with its unique architecture and charming atmosphere. This is a great place to try paella near the beach and check out some local bands at one of the former warehouses now being converted into event spaces. This district was once a completely separate town from Valencia, and despite being absorbed by the expanding urban area, it still retains an atmosphere of being somewhat different. There are big, controversial plans for redevelopment of the area which would involve bulldozing many of the historic buildings, so visit while you still have the chance. 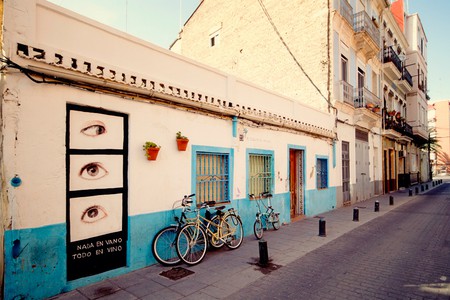 A short stroll from El Cabanyal, the modern port area is worth a visit for its interesting architecture and of course a stroll around the marina, where you´ll see everything from tiny fishing boats to the occasional enormous visiting cruise liner. At the handful of upmarket bars by the marina, you’ll see visitors stepping off their sailboats to enjoy a glass of cold Cava and a plate of seafood. The former Americas Cup building, now called Veles e Vents, is now becoming a well-known hotspot for gastronomy, music and culture, while other former warehouse buildings nearby are used as skate parks, live music venues and much more.