The Best Things to See and Do in Granada in Spring 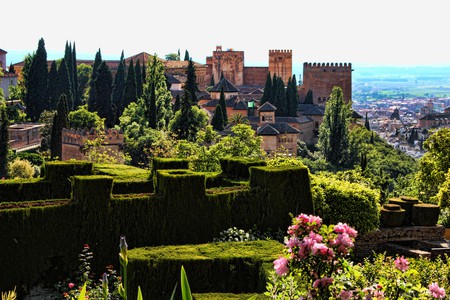 Granada is at its most attractive in the spring, when its beautiful gardens and parks are in bloom and it’s not too hot to wander around and appreciate them. It’s also the perfect time to explore its oldest neighbourhoods, pretty streets and historic monuments.

Though plenty of tourists do it, visiting the Alhambra in summer is not a great idea. From late June onwards in Granada, temperatures climb above 35° most days, meaning that unless you head up the steep hill to its most famous monument at the crack of dawn, it will be too hot to enjoy it. Spring, though, is the perfect time to visit the greatest surviving relic from Andalusia’s 800 years under Moorish rule between the 8th and 15th centuries. The Alhambra’s location is something to behold in itself, sitting as it does on top of the verdant Darro Valley, against a dramatic backdrop provided by crisp peaks of the Sierra Nevada. Built in the 9th century, the exterior structures were extensively rebuilt in the 1200s by Mohammed I ibn Nasr, the Moorish ruler of what was then the Emirate of Granada.

The key attraction within its forbidding walls are the Nasrid palaces, built by the Nasrid Kings – the last Moorish rulers of Granada – during the 13th and 14th centuries. These comprise the Mexuar, which contains one of the Alhambra’s most intricately designed internal walls; the Comares Palace, which was the official residence of the Sultan of Granada; and the Lion’s Palace, the internal courtyard of which is one of the most famous and aesthetically pleasing features of the palaces. The tranquil, shaded gardens of the Alhambra’s summer palace, the Generalife, are also particularly beautiful in spring. 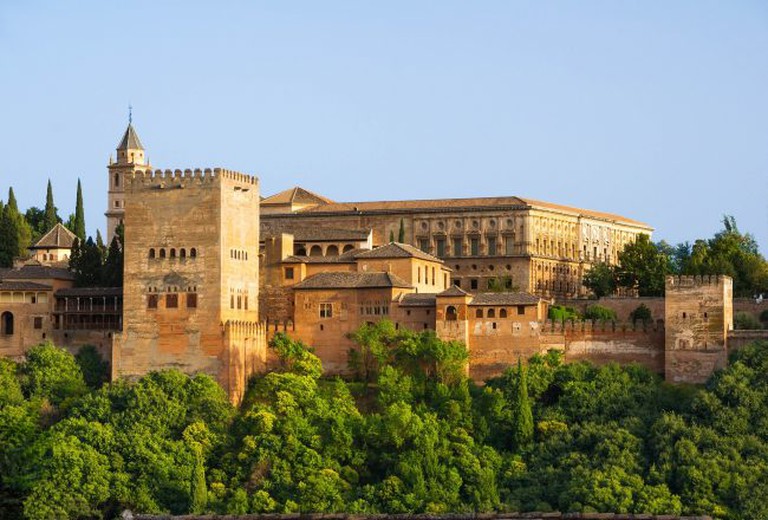 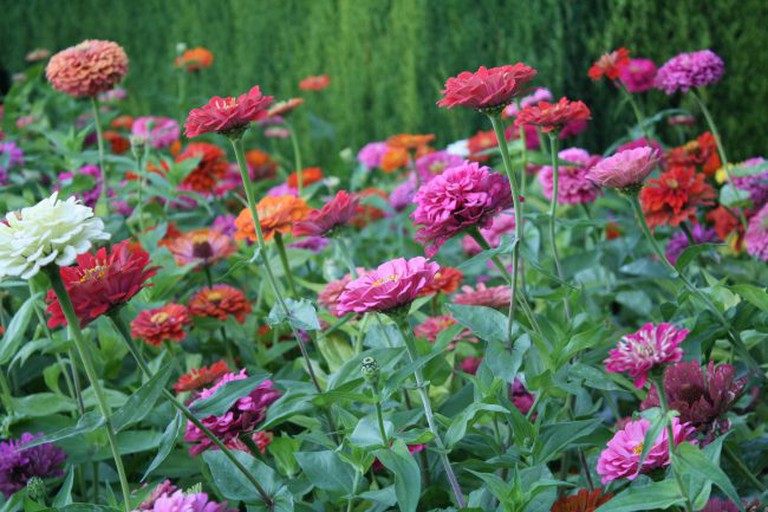 Granada's gardens and parks are particularly attractive in spring | © Allison Fender/Flickr
If you’re at the top of the hill to visit the Alhambra, don’t go back down to town without first wandering around the Carmen de los Martires gardens. Situated next to the great Moorish fort at the top of the city, this small park is particularly attractive during spring, when its many species of flowers and trees are in bloom. Because the majority of visitors head straight for the Alhambra, this lovely haven of greenery, small ponds and leafy paths is only ever sparsely populated with strollers: as a result, it feels private, almost exclusive. In spring, its shaded walkways provide a sanctuary from the powerful sun, and its views of the landscape beyond Granada give a sense of space that can be lacking in the cramped city centre. A fairytale tower sits in the middle of this verdant oasis; climb up its small spiral staircase and survey the gardens and Granada from the city’s most romantic viewpoint.
Open In Google Maps
s/n Paseo de los Mártires, Granada, Andalucía, 18009, Spain
+34958849103
Visit Website
Give us feedback

Walk By The River Darro

The Carrera del Darro is Granada’s prettiest thoroughfare at any time of year, but in spring it is truly beautiful. Beginning from Plaza Nueva and winding down towards Albaicín alongside the Darro River, this lovely old cobbled street features on most of the postcards on sale in Granada. It is lined with centuries-old buildings rising up from the riverbank, their worn facades covered in spring by lush creepers and trees with colourful blossom. Peer over the ancient stone wall to see the Darro River gently flowing between verdant banks; here, the Darro passes under two of the oldest bridges in Granada, and remnants of a few more that used to connect Albaicín with the Alhambra. Walking down the Carrera del Darro in early evening, as the sun disappears over the rooftops of Albaicín, will be one of the most unforgettable experiences of your visit. 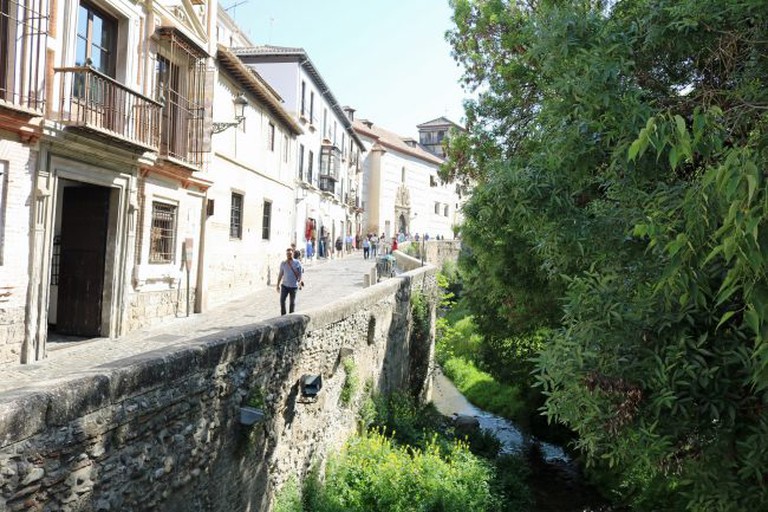 The Carrera del Darro is beautiful in spring | © Jeffrey Beall/Flickr

Climbing to the top of Albaicín, Granada’s beautiful old Arabic quarter, is still just about possible in spring. This barrio of crunched-together, whitewashed houses and pretty cobbled squares occupies the hillside on the opposite side of the valley from the Alhambra, and is the best place in the city to wander aimlessly if the temperature permits. Popular with both tourists and locals is Plaza San Nicolas, which offers unforgettable views of the Alhambra and the Sierra Nevada mountain range in the background. Given its central location, you can’t help but find your way to San Nicolas eventually, affording the opportunity to become happily lost in Albaicin’s maze-like streets on your way; these are particularly beautiful in spring, when their scruffy white walls are overhung by colourful, aromatic Jasmine flowers and geraniums. 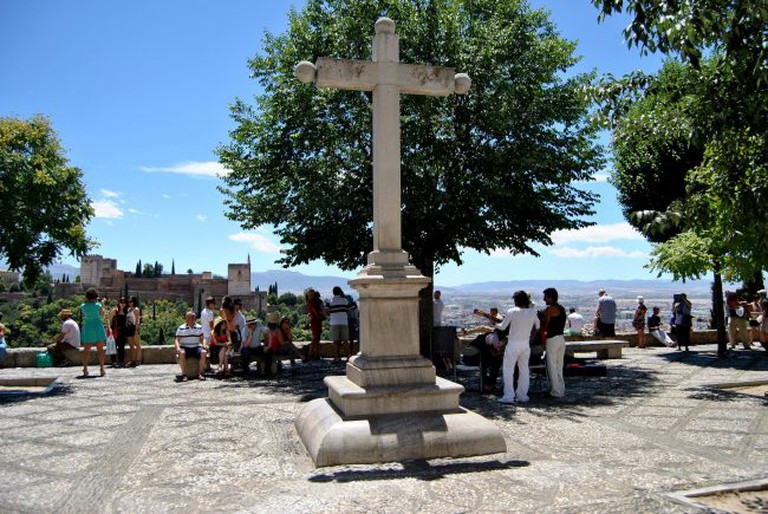 Walk from Albaicín to Sacromonte

If you’re up in Albaicín to check out the views from San Nicolas, you can head over to the Gypsy neighbourhood of Sacromonte via the rugged, cacti-studded countryside that separates these two other-worldly barrios. This lovely walk is best enjoyed in spring, when the temperatures won’t leave you doubled up and panting for breath, and when the countryside is at its most attractive. Head up the steps to the Ermita San Miguel Alto (another incredible viewpoint in its own right) and follow the main path around the hermitage and out into the open countryside high above the city. The track takes you over the hill, down into a mini-valley and back up into Sacromonte, where Granada’s Gypsies live in caves carved into the hillside. The countryside up here is also a great place to stop for a picnic, or from which to watch the sun set over the rooftops of Albaicín. 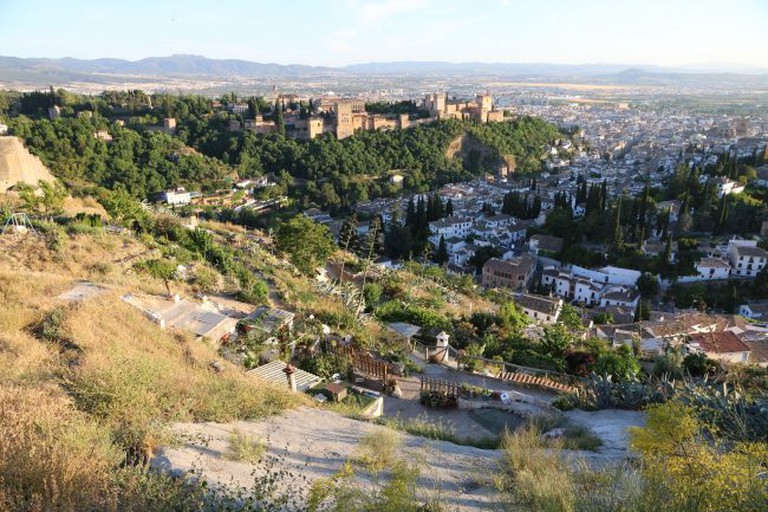 Known as the ‘Donkey Square’ by granadinos on account of the statue of a donkey in one corner, this is one of central Granada’s most attractive spaces. Its many outside seating areas can be too hot during the summer, as they are directly in the line of fire of the searing midday sun; but in spring it is a perfect place to people-watch and enjoy some tapas. Service at the bars that line its east side is always friendly, and the tapas dishes are more inventive and pan-Mediterranean than those served in the city’s traditional bars and restaurants. Donkey Square also offers a striking contrast between modern and classic architecture: the slanting, white panels of the Federico Garcia Lorca Centre are right next door to stately apartment buildings in the traditional Andalusian style, and towering over them all is the lone tower of Granada’s mighty cathedral. 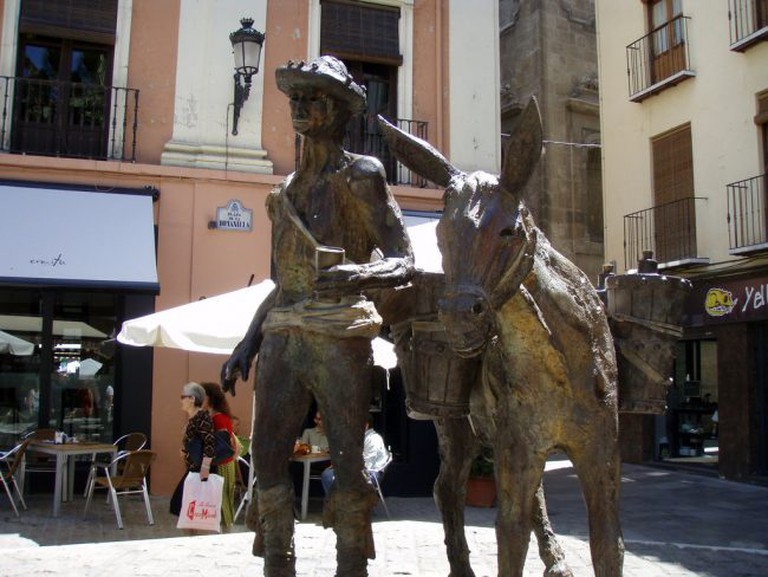