The Best Hotels for a Spa Break in Pamplona, Spain 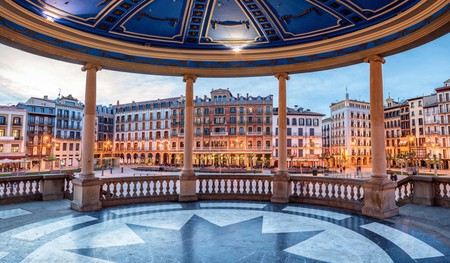 Treat yourself to a rejuvenating spa session in the beautiful city of Pamplona, Spain | © Timo Christ / Alamy Stock Photo

After celebrating the famous festival of Saint Fermin – dancing, fireworks, running with the bulls – or arriving in from the Camino de Santiago, there’s nothing better than hitting the spa. In Pamplona and the surrounding Navarre countryside, spa hotels and day spas offer respite from busy days. These are the best options for a spa break in Pamplona, bookable with Culture Trip. 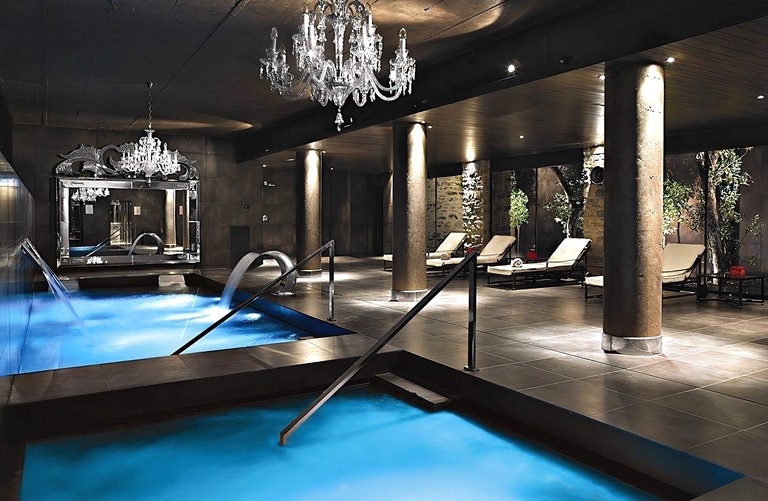 This sumptuous hotel offers a country spa break without needing to leave the city limits. Above the suburb of Gorraiz, 15 minutes from the centre of Pamplona, leave the bustle of the city behind at the end of the day. There’s something castle-like about this hotel – and it’s not just the restaurant housed in a medieval tower. Even in the modern annexe, you’ll find a roaring fire fit for kings and queens in the lobby, and rooms swathed in dark velvet. The spa is no less opulent, as a chandelier sparkles above the hydrotherapy tub, and thick old walls and columns are lit up like a medieval water cistern. 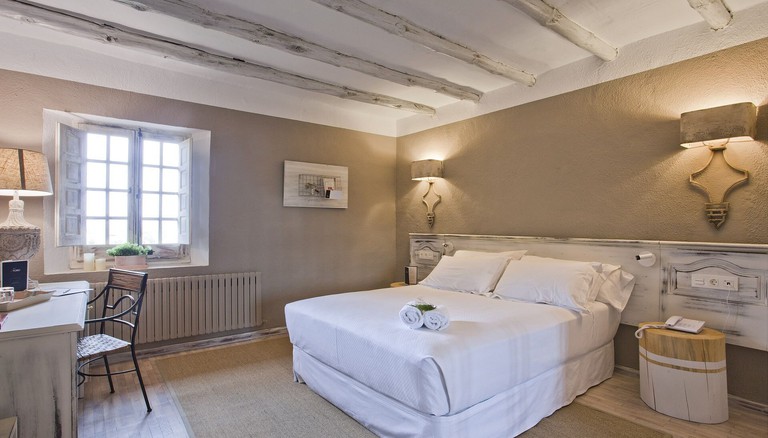 If you’re looking for a country break with easy access to the city, this is the spa hotel for you. 5km (3mi) from the centre of Pamplona, it’s set in rolling farmland. The 400-year-old building was moved, brick by brick, from 30km (18.6mi) away in the 1960s. The lobby sets the boho-luxe tone, with chandeliers hanging from the wooden ceiling and plants spilling from exposed stone walls. Rooms carry on this theme, with distressed-wood wardrobes and headboards complementing beamed ceilings. The spa has a hydrotherapy pool and an array of treatments for couples and individuals alike. 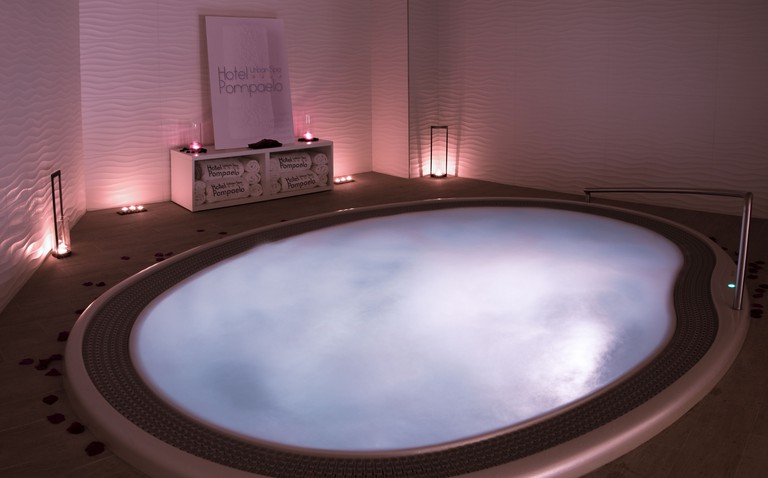 This boutique hotel is right in the centre of Pamplona, overlooking the Plaza Consistorial and boasting a direct view of the route of the running of the bulls. Whether you’ve been running through the streets or just watching the festivities, the spa with its jacuzzi, steam room and sauna is there to soothe aching muscles. A stylish rooftop bar comes with views of the shambling old town and the misty mountains beyond, for the perfect post-massage sundowner. 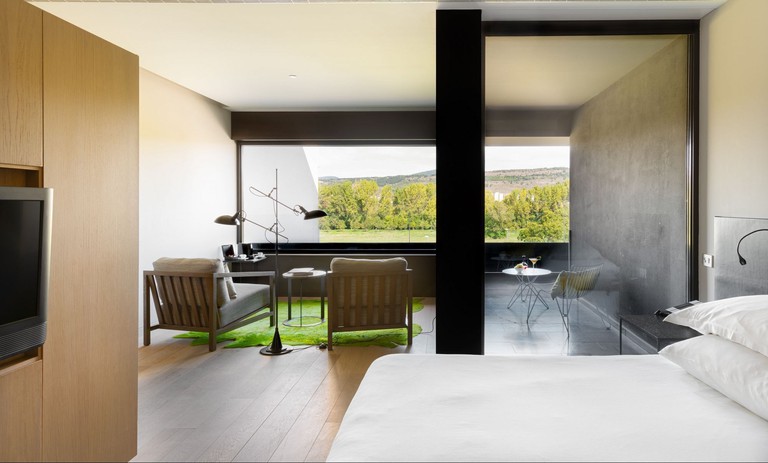 © Hotel Alma Pamplona / Expedia
A striking rectangle of black stone and glass, this five-star hotel rising out of the Navarre countryside looks like a modern art gallery. Inside, a curated decor of midcentury lounge chairs, stone sinks in ensuites and graffiti-style wall art feels as though it was designed by an artist. Outdoor activities are the order of the day – this is a cycling-friendly hotel with a bike workshop, and staff can organise kayaks for a paddle on the neighbouring River Arga. Restorative spa sessions in the sauna, jacuzzi and massage rooms soothe aching legs and arms. 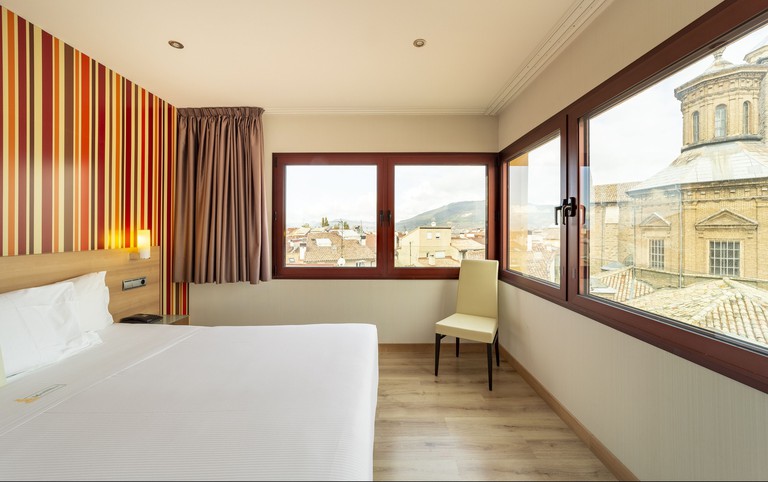 In a quieter corner of the old town, Hotel Maisonnave is the ideal place for those that want to enjoy the buzz of the city centre, but return to a calm retreat. It’s been run by the same family for the past two centuries, and service feels especially friendly and personal. Superior rooms and suites come with big corner windows looking out over the old town’s rooftops. There’s a gym and sauna in the hotel itself, and if you want to indulge in a post-sightseeing massage, Eli Masajes day spa is just a seven-minute walk away. 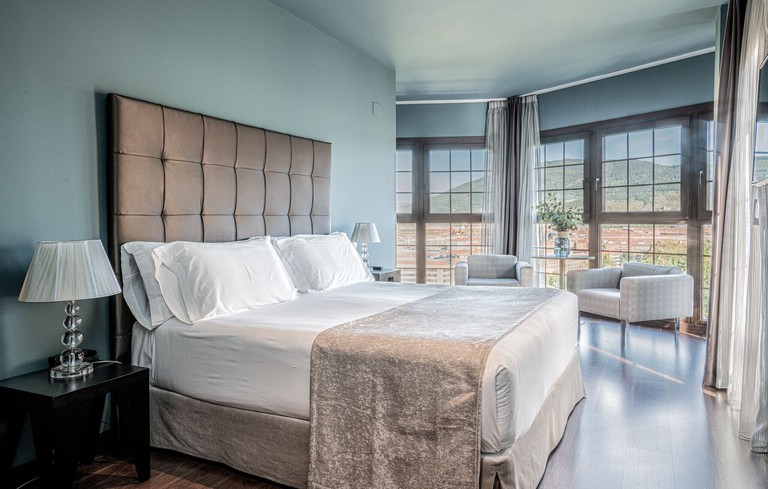 © Pamplona Catedral Hotel / Expedia
There’s not much that gives away this hotel’s former life as a medieval convent, except for the wrought-iron entrance gate and the stained-glass windows in the chapel turned fine-dining restaurant. It’s all sleek modernity with rooms in gold and dark blue, with floor-to-ceiling windows looking out over the city. Pamplona Catedral Hotel sits on the edge of the old town, where the famous Camino de Santiago leaves the city. Prepare for a day on the trail with a visit to Eli Masajes day spa, a three-minute walk from the hotel’s front door. 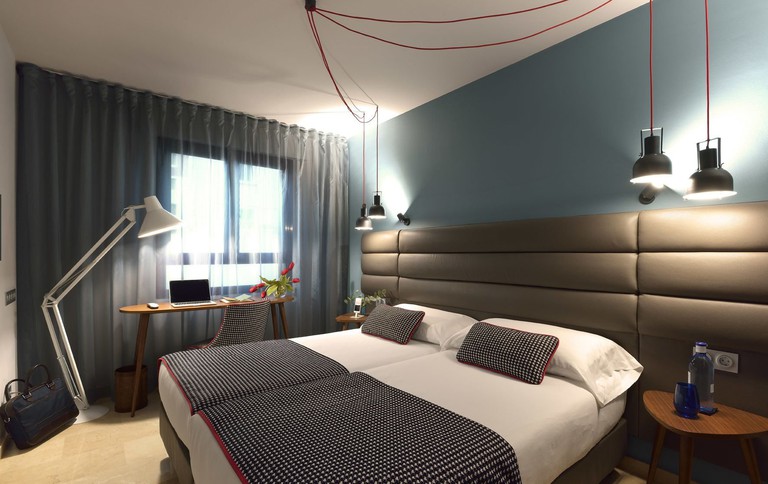 If you’re looking for a budget stay in Pamplona without compromising on location or comfort, Pamplona Plaza is the place for you. Modern rooms in stylish slate grey and dusky blue offer a soothing place to rest your head. It’s a 10-minute walk into the old town, along the riverside and through parkland, which feels like an experience in itself. After a day in the city, why not treat yourself to a massage or beauty treatment at Centro Sensaciones “Estética & Bienestar” day spa, an eight-minute walk from the hotel. 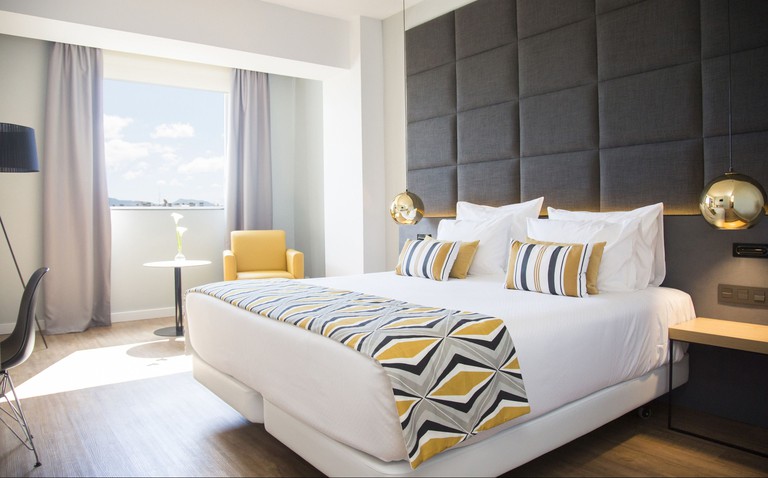 © Hotel Tres Reyes / Expedia
Hotel Tres Reyes sits right where Pamplona’s old town meets the sprawling parkland of Jardines de la Taconera. This is one of the city’s most luxurious hotels. Standard rooms in black and white have throne-like armchairs – or upgrade to a suite, trimmed with gold and featuring views over the park. The poolside terrace is backed with greenery and the tinkle of a piano forms the soundtrack to sundowners in the lobby bar. Upgrade your deluxe city break to a spa break with a day session at nearby Centro Sensaciones “Estética & Bienestar”, a 15-minute walk away. 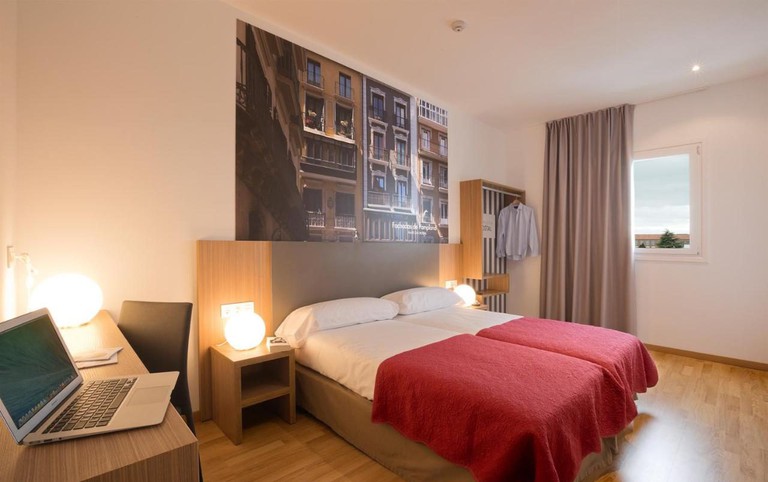 If you’re travelling as a group or a family and want to save some pennies, Hostal Pamplona is ideal. Each of the double, triple and quadruple rooms on offer have a photo mural of the colourful festivities of Saint Fermin, so there’s no forgetting you’re in Pamplona. The location, however, offers something a little more peaceful than the historic centre – a position in the residential north of the city with quiet streets. In the same neighbourhood, you can relax with a spa experience from the Far East at Oriental Harmony, just over a mile away. 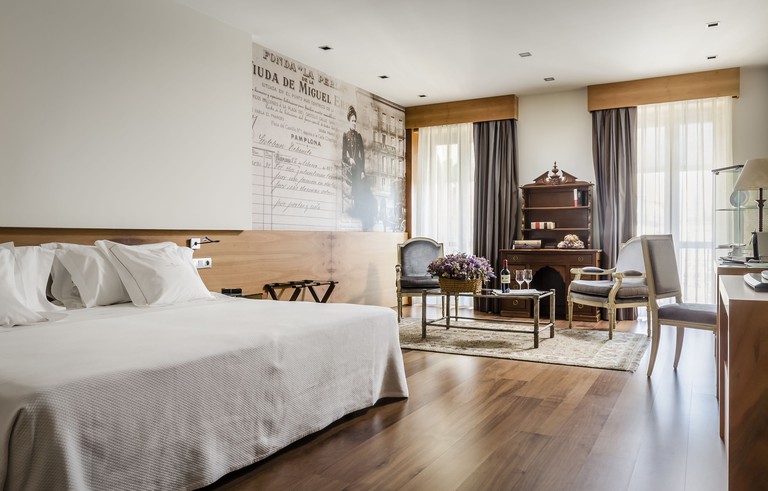 © Gran Hotel La Perla / Expedia
Radiating old-world charm in the centre of Pamplona, the Gran Hotel La Perla lives up to its name. Sumptuous rooms and a sparkling lobby have attracted the likes of Elizabeth Taylor and Ernest Hemingway through the doors. You can still stay in Hemingway’s room, preserved since his last visit in all its gilded, satin splendour. Rooms facing Estafeta Street have balconies that look directly onto the running of the bulls in July. Though the hotel doesn’t have a spa, you can unwind with a massage or treatment at Oriental Harmony – a day spa in the quiet north of the city.

Looking for more inspiration? Our local experts have narrowed down the best hotels in Pamplona, or if you’re looking for a more affordable option, the best budget stays in the area so you can confidently book your next stay with Culture Trip. If you’d like to branch out and explore the surrounding area, these are the reasons why we think you should visit Bilbao at least once in your lifetime. We’ve also got a list of things you should know before visiting Bilbao that we’re sure will come in handy. Heading elsewhere? Discover our guide to the best hotels in Vigo and book now on Culture Trip.