The 8 Best Museums In Valencia You Should Visit

Interior of the IVAM | ©16:9clue / Flickr
Valencia is world-famous for paella and its succulent oranges, but it’s also home to a eclectic mix of museums. Discover the culture of this southeastern city with our recommendations for the best museums and institutions to visit in Valencia.

Building, School, Museum
IVAM | ©Juanacampsmontesionos/WikiCommons
The Ivam, L’Institut Valencià d’Art Modern, is the most important institution of modern and contemporary art in the city of Valencia. The building holds various temporary exhibitions and two permanent shows of the work of two big Spanish artists: the abstract sculptor Julio González and the Impressionist painter Ignacio Pinazo. As a center of exhibition and study, the IVAM tries to make us reflect, with their displays, on the ideas and the aesthetics discourses that have appeared in the art world from the avant-garde period until the most recent contemporary times. A visit to this center is a perfect choice for those who don’t like art just for its beauty, but also because of its discursiveness. Moreover, apart from the different exhibitions, the IVAM also hosts conferences and different events in the fields of culture and arts.
More Info
Open In Google Maps
118 Carrer de Guillem de Castro, València, Comunidad Valenciana, 46003, Spain
+34963176600
View menu
Visit website
Visit Facebook page
Send an Email
Give us feedback

Museum
MuVIM | ©Felivet/WikiCommons
The MuVIM, the Museu Valencià de la Il·lustració i la Modernitat, was created in 2001 as a space to host two main concepts: the illustration period and the influences of this enlightened age in the present. Over the years, though, this idea has evolved, and now this concept is mainly covered by its permanent exhibition: ‘The adventure of thought’. The rest of the rooms in the museum have started a more heterogeneous approach to art. Nowadays, this institution includes a variety of exhibitions related to different forms of art that escape from the traditional concept of fine arts. It hosts various shows about photography, design, advertisement, cooking, music… and some other daily life topics. It is an interesting way to discover a more popular art, closer to the different elements that form part of our context. Moreover, as it is a public museum and its owner is the regional government, its exhibitions always include a bit of regional flavor.
More Info
Open In Google Maps
10 Carrer de Quevedo, València, Comunidad Valenciana, 46001, Spain
+34963883730
View menu
Visit website
Visit Facebook page
Send an Email
Give us feedback

Museum
Interior of the Fine Arts Museum of Valencia | ©Vincent desjardins/Flickr
This third museum shows unique pieces of art on its walls, very different from the previous ones. This is a fine arts museum, and its collection contains different artworks from the Romanic period until the Renaissance. El Museo de Bellas Artes de Valencia stands out for gathering many pieces of medieval art from different churches and convents from all around the region, and also diverse artworks of some of the most prominent painters from the Baroque and Renaissance periods, like Van Dyck or Goya. Also, this museum offers an exploration of the art and the life of one of the most prominent Valencian painters: Joaquín Sorolla. This painter has his own room, where 42 of his pieces are displayed to show the peculiarities of his art and his career.
More Info
Open In Google Maps
9 Carrer de Sant Pius V, València, Comunidad Valenciana, 46010, Spain
+34963870300
View menu
Visit website
Visit Facebook page
Send an Email
Give us feedback

Building, Museum
El Museo Nacional de Cerámica y Artes Santuarias ‘Gozález Martí’ is the only national museum in the city of Valencia, as most of them are in the capital, Madrid. The Palace of the Marqués de dos Aguas, a very unique and special Rococo palace, serves as a location for this museum. It houses different collections on ceramics and decorative arts. Some of the most prominent are the different examples that show the way in which the material and its decoration are done by the local artisans, but it has also different national and international examples. Even if the ceramics are the core of the collection it has also different examples of furniture, clothing, numismatics, painting and graphical arts. Together with the visit to the museum, it is also very interesting to do a guided tour of the building; the outside is stunning and the inside has plenty of beautiful and peculiar details.
More Info
Open In Google Maps
2 Carrer del Poeta Querol, València, Comunidad Valenciana, 46002, Spain
+34963516392
View menu
Visit website
Visit Facebook page
Send an Email
Give us feedback

Building
Interior of the Del Carmen Center | ©Joan Banjo/WikiCommons
Located as its name indicates in the centric and historical neighborhood of El Carmen, Del Carmen Cultural Center holds the headquarters of the regional association of museums. Its building is a beautiful and recently restored convent, so the edifice and especially its two old courtyards are by themselves a very good reason to visit this institution. It doesn’t have a permanent collection and the exhibitions that it hosts are quite heterogenic. Nevertheless, two main topics can be found among all the exhibitions: contemporary art and regional art. So it is an interesting place to enjoy many different displays on the new tendencies and discourses in art, and more than anything to discover the work of the most prominent (recent and old) Valencian artists.
More Info
Open In Google Maps
4, 2 Carrer del Museu, València, Comunidad Valenciana, 46003, Spain
+34963152024
View menu
Visit website
Visit Facebook page
Send an Email
Give us feedback

Museum
Dinousaur skeleton at the Natural Sciences Museum of Valencia | ©19Tarrestnom65/WikiCommons
Located in the middle of one of the most beautiful gardens in Valencia, los Jardines de Viveros, the Municipal Museum of Natural Sciences is one of the few museums on this list not focused on art. As its name suggests, this is an institution dedicated to the natural sciences. The museum explores the progress made in the field from the Renaissance until the middle of the 20th century, emphasizing the contribution made by the most prominent Valencian scientists. The museum also hosts the legacy of J. Rodrigo Botet, an important collection of paleontology, with different dinosaur skeletons, which will be an exciting encounter for both the young and the adults.
More Info
Open In Google Maps
s/n Carrer del General Elio, València, Comunidad Valenciana, 46010, Spain
+34962084313
View menu
Visit website
Visit Facebook page
Send an Email
Give us feedback

Museum of Prehistory and Ethnology Museum

The Museum of Prehistory and Ethnology Museum share the same building, el Centro Cultural de la Beneficiencia, the old Charity House in Valencia. As the Museum of Prehistory has run the majority of excavations in various sites around the Valencian area, its collection is formed by the spoils discovered during the works. It serves both as a preserver of the diverse prehistoric objects as well as a tool to educate on this period of history and it’s also a perfect location to take kids. The Ethnology Museum centers on the fields of culture and anthropology. It centers its study in the different cultures of the area and the relations among them, taking special attention to the local culture and the Mediterranean society. 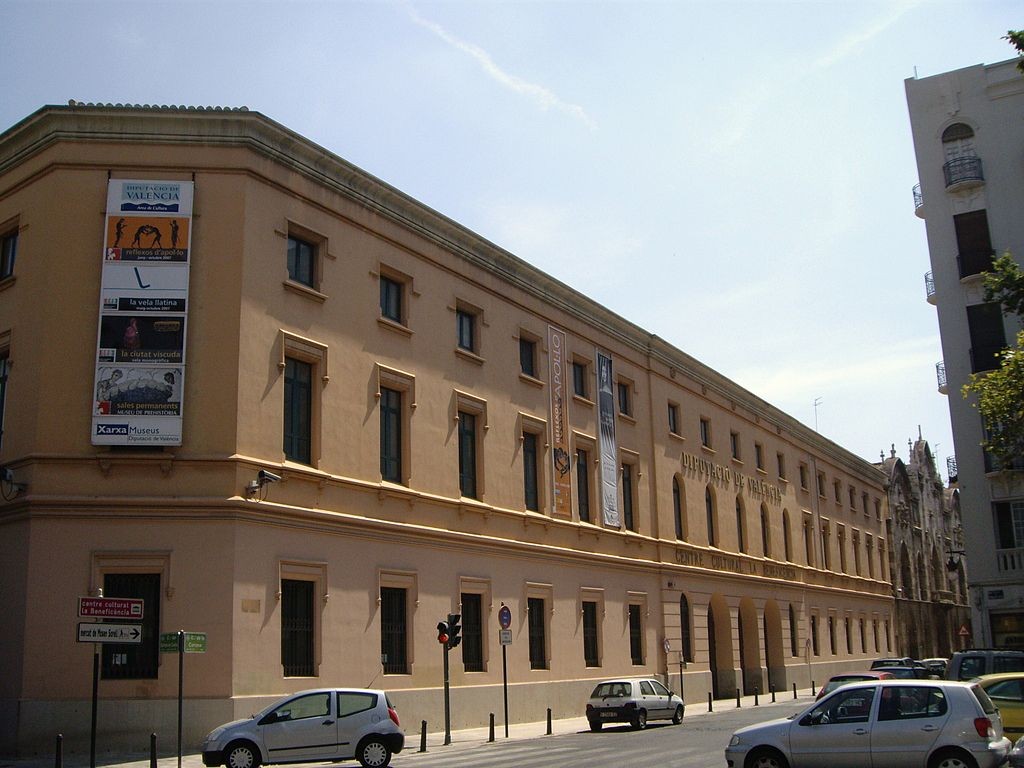 Building, Library
Centro Cultural Bancaja | ©Diego Delso/WikiCommons
The only private institution in our list, the Bancaja Cultural Center is a property of the Bancaja Foundation, owned by one of the biggest banks in Spain, Bankia (first Bancaja). It’s located in a classical building in the center of Valencia, the headquarters of their cultural action in the city. On the premises, apart from a library and different spaces for events, they have three different rooms for exhibitions. The displays are temporary, but as the foundation owns a very large collection on some of the most brilliant Valencian and Spanish artists, it is not unusual to see exhibitions on Picasso or Sorolla, and also on more recent and emergent artists.
More Info
Open In Google Maps
23 Plaça de Tetuan, València, Comunidad Valenciana, 46003, Spain
+34960645840
View menu
Visit website
Visit Facebook page
Send an Email
Give us feedback
Give us feedback