The 7 Most Beautiful Skyscrapers In Barcelona 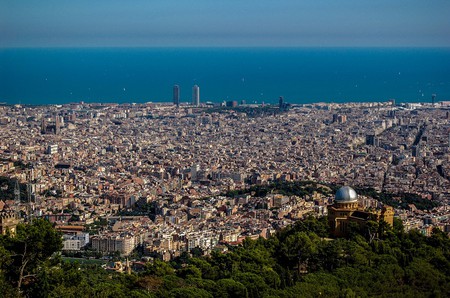 Since Barcelona held The Olympic Games in 1992, the city has welcomed the global tendency of growing up iconic skyscrapers in the urban fabric. However, its coastal-Mediterranean pattern focused on maintaining architectural integration and balance as planning criteria, making all the difference. The skyline of Barcelona, where the tower buildings commonly stay under 150 meters high, embraces sustainable design, creativity and its own character. Here are the seven most beautiful skyscrapers in Barcelona.

The allegoric shape of Hotel W makes it known as la vela among locals, which literally means the sail. Its location at the harbor entrance, in front of the Mediterranean Sea and the beach of La Barceloneta to its feet, was strong inspiration for the architect Ricardo Bofill. In consequence, the silhouette of the 100 meter high skyscraper became an icon of the urban skyline. However, the building is formed as well by a lower cubic volume supporting la vela, both wrapped in a facade of silvered glass. The whole masterpiece was awarded in 2010 the best exterior hotel architecture in Europe. 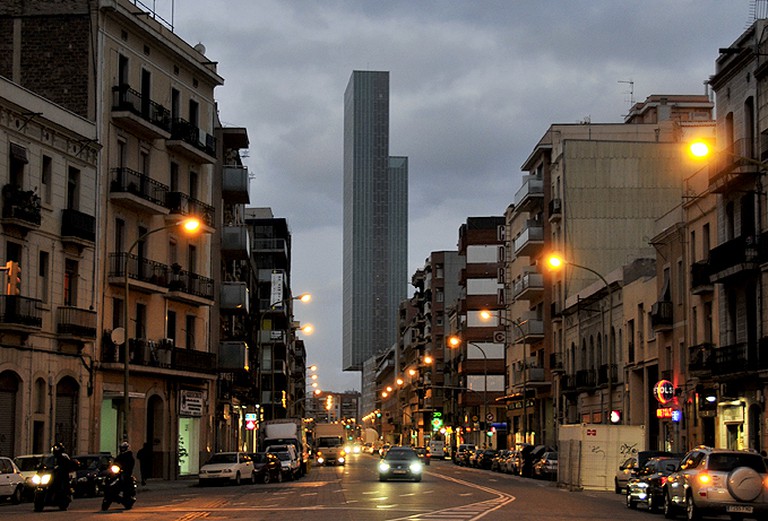 PereIV-HabitatSky | ©Manuellebron/WikiCommons
The first building designed by Dominique Perrault in Spain was Hotel Mélia Barcelona Sky, which reaches up to 120 meters in the Avinguda Diagonal. The project responds to its urban context throughout a composition that remarks the idea of openness and movement. Visitors can easily see it when looking at the two towers, as if once they had been the same regular volume. After a longitudinal cut, whilst one of the halves slid up to the sky, the other stayed placed on the ground. This dynamic effect is reinforced by its light facade, which consists of glass panels of different textures.

This skyscraper has been, with the neighboring Torre Mapfre, the highest building in Barcelona, since it was designed by Bruce Graham for The Olympic Games in 1992. Both are located in the waterfront of the Vila Olímpica, and just a few steps from the emblematic sculpture of Frank Gehry called El peix d´Or. The Hotel Arts was inspired by the aesthetic of high-tech architecture as we can see in its perimeter a steel structure that is absolutely exposed. Composing the facade with this exoskeleton, there is the curtain wall, which gives prominence to the industrial image and allows aerial views of the bay. 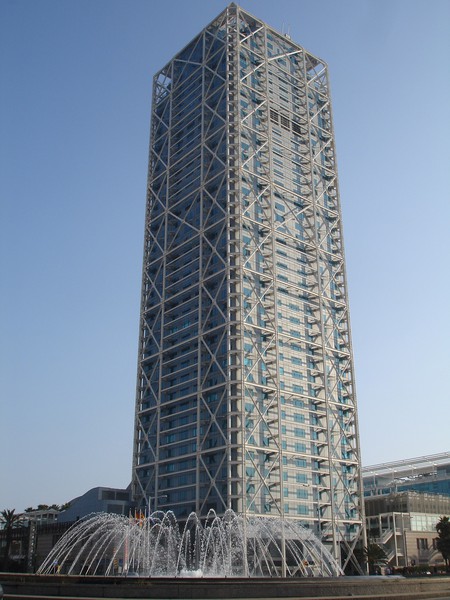 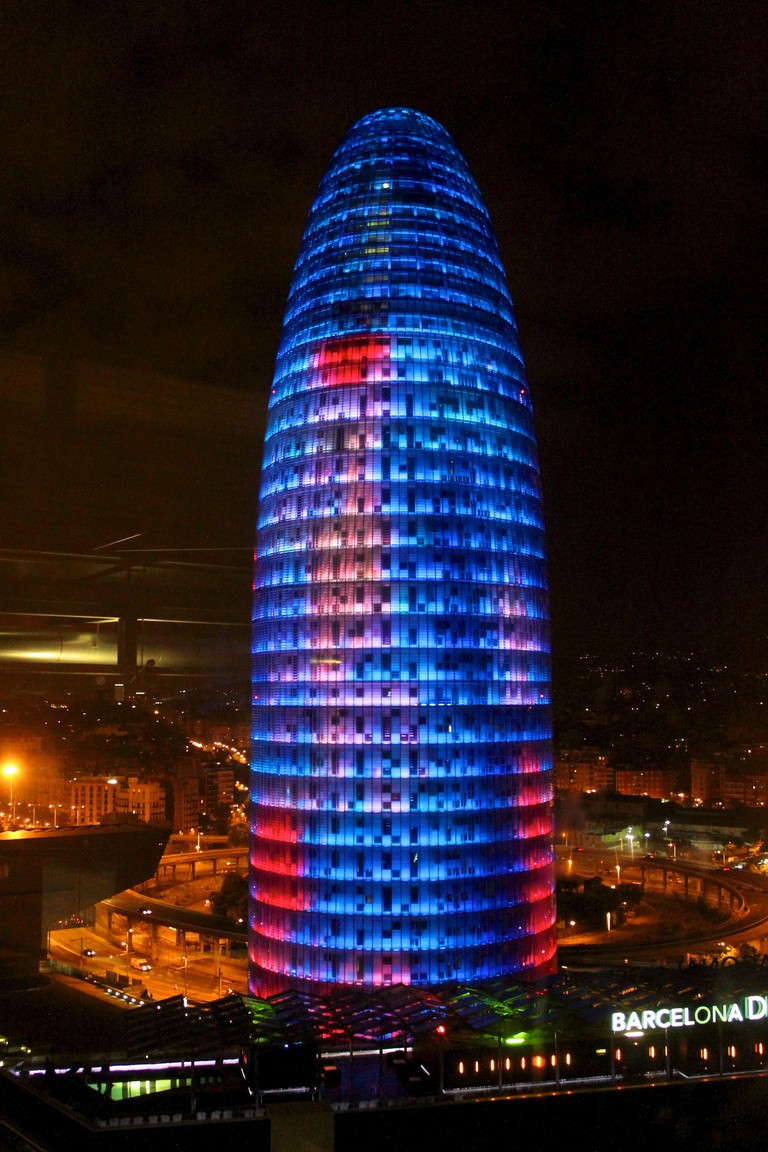 Torre Agbar | ©Alexander Johmann/Flickr
This impressive 145 meter high skyscraper became a symbol of the urban landscape because of its contemporary design, which plays with the opposite concepts of massiveness and lightness. Jean Nouvel and b720 Arquitectos created a cylindrical building topped with a glass dome, working on concrete structural walls that were covered with colorful glass louvers. This exterior layer provides a changeable facade that seems to be lighter. However, the facade gives its best image at night, when the Diffractor lighting system and LED displays offer a show of bright patterns on the exterior of the tower. 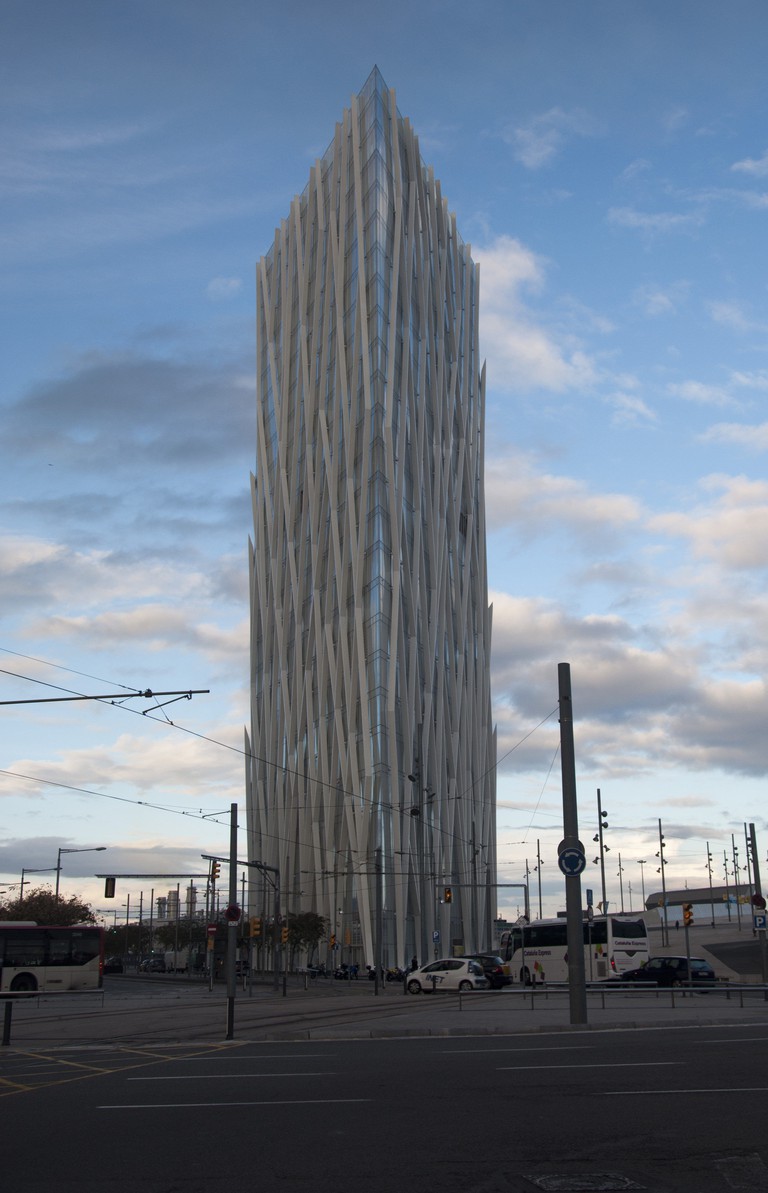 Barcelona, Spain [Diagonal Z Building] | © Joan Díaz Gallamí
At the beginning of the emblematic Avinguda Diagonal, close to the waterfront and the Forum Building, this skyscraper will attract viewers’ attention. With its 110 meters, Torre Diagonal Zero Zero contrasts with the predominantly horizontal layout of the area, underlining the slenderness and expressiveness of the tower. In fact, EMBA studio designed it following a trapezoidal scheme with pronounced angles, adding a perimeter white steel structure in two rings, whose external net draws a dynamic-rhomboid pattern. The extra-clear-glass curtain wall behind the steel works with these features to create a game of light and shadows as if the facade had been screen printed. The skyscraper was the best commercial building of the year in 2011 according to LEAF International Awards. 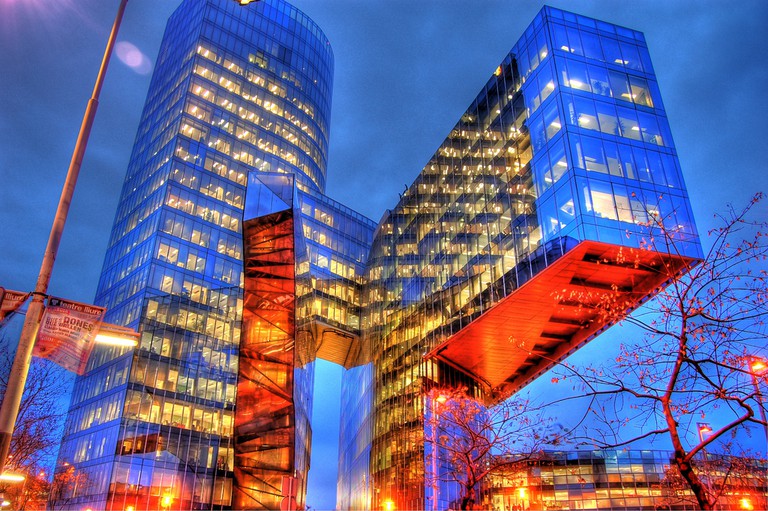 Gas Natural | ©Sergi/Flickr
In 2006, Barcelona welcomed the new gas company headquarters, also known as Mare Nostrum Tower, which was the last masterpiece of Enric Miralles. With its 85 meters, the polyhedral composition of this building reveals to passers-by a new perspective each time, through its asymmetric design and the glass curtain wall facades. The main element is a vertical skyscraper, which is connected to a spire-shaped module, and a horizontal building based on the fifth floor of the tower. At the same time, the glass exterior contributes to the creation of a changeable presence, bringing the viewer specular reflections and distorted images of the environment. 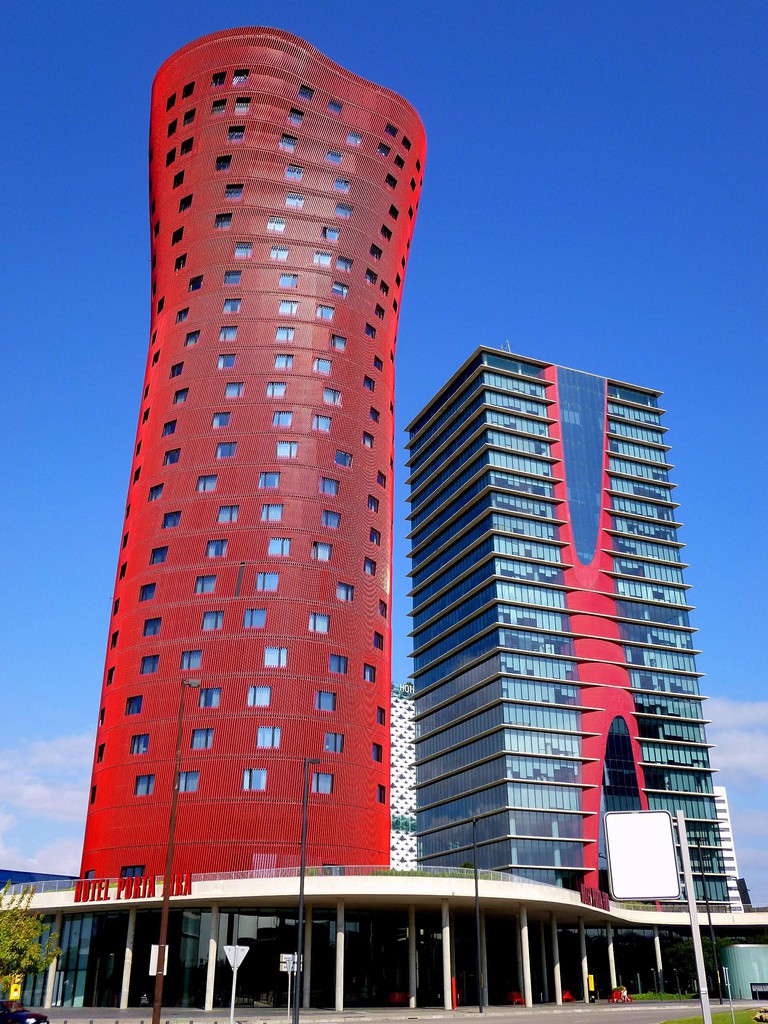 Hospitalet de Llobregat-Plaza de Europa, Torres de Toyo Ito (Torres Porta Fira) | © Zarateman/WikiCommons
Although this award-winning skyscraper is placed in L´Hospitalet de Llobregat, seven kilometers from Barcelona, it works like the first gateway of the city in the south. Its organic geometry designed by Toyo Ito and the firm b720 Arquitectos, is part of a dual composition completed by an orthogonal office building. Both are 113 meters high, but the hotel points out due to its slenderness and variable contour in bright red. This remarkable facade consists of two layers with specific functions. The inner skin encloses the living space, whilst the exterior dermis seems to be a continuous surface thanks to a collection of independent-longitudinal tubes of aluminum that adopt the winding geometry.
Give us feedback