The 7 Best Water Parks in Spain 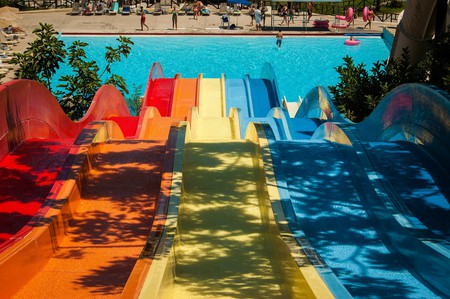 Water parks are a great option for a family day out, especially in Spain, where the weather is usually warm and sunny, making a day of cooling off in a watery wonderland an attractive proposal. Many are located close to popular tourist resorts and offer free transport from local towns. They are a great option whatever your age, and offer everything from paddling pools to jaw-dropping thrill rides. We take a look at some of the best water parks Spain has to offer.

Siam Park, a Thailand-themed water park on the Canary Island of Tenerife, was voted the world’s top water park in 2017 by TripAdvisor users. This mammoth tribute to all things Thai (the park’s designer even obtained permission from the Thai royal family for the design, and Thai Princess Maha Chakri Sirindhorn opened the park in 2008) features a wave pool with the world’s biggest artificial waves. Adrenaline junkies flock to the Tower of Power, which sends riders down a vertical, see-through slide that shoots through a pool of sharks and stingrays. For those looking for a more laid back time, there are sun beds next to the park’s own beach. Free buses run daily from nearby resorts.

Aqualandia is a stone’s throw from the popular tourist resort of Benidorm on Spain’s Costa Blanca. From sunbathing areas and swimming pools to water slides and river rapids, the park has a range of attractions for all ages. It opened in 1985 and was Europe’s biggest water park until Siam Park opened in 2008. It is right next to the Mundomar marine animal park and combined tickets are available. Star rides include Verti-go, a turbo-charged vertical water slide that begins with the rider standing on a trap door that suddenly opens beneath them – definitely not one for the faint-hearted.

Water World is the main water park on the Costa Brava, near the town of Lloret del Mar. The park has a wide range of rides and attractions for all ages, from the tamest paddling pools to the scariest slides. Children can play on Kiddie Island or splash around in Kids’ Lagoon, while big kids can test their bravery on rides including Speed Furious, a vertical drop, and Storm, a unique ride that makes you feel as if you are being sucked into a whirlpool. There is a free bus to the water park from surrounding towns including Lloret del Mar, Tossa del Mar and Blanes.

Caribe Aquatic Park, near Salou, is one of the main attractions of Port Aventura, Spain’s most-visited theme park. Little ones can play Jack Sparrow in the pirates’ playground, while older visitors can try the highest free-fall slide in Europe… if their stomachs can take it. After all that excitement, relaxation is in order on a sun lounger at Bahama Beach.

This Wild West-themed water park near Magaluf on the Balearic Island of Mallorca is fun for all the family, from its children’s pools to its professional high-diving shows. Highlights for thrill-seekers include the Boomerang, a huge 15-metre (50-foot) half pipe with a vertical drop, and The Beast, a kamikaze ride with a drop of over 30 metres (100 feet).

Mallorca’s biggest water park, in the south of the island, offers a great family day out. Race your friends down the Multipista slides or jump over the huge waves off Surf Beach. A highlight of the park’s thrill rides is King Cobra: it is one of Europe’s highest rides and was voted Best Ride in Europe three years in a row. Smaller children can explore Dragonland, where slides and a giant dragon sculpture will keep them entertained for hours, while older kids can check out Adventureland, where mini versions of the big adult slides let them join in the action.

Aquópolis is on the Costa Dorada, south of Barcelona, and offers an exciting day out, whatever your age. Small children can explore Treasure Island and the Funny Jungle, while older kids can test their skills on the assault course over Indiana Lake – you can compete against your friends and family to make it extra-entertaining. Rides sure to get the adrenaline pumping include the Black Hole and Kamikaze. Aquópolis also has its very own surf ride, Surf Waimea, where you can bodyboard or surf on a huge artificial wave.