The Best Shopping Centres In Barcelona

While the Passeig de Gracià is lined with some of the biggest designer labels in the world, from Luis Vuitton to Stella McCartney, and El Born is home to a wealth of artisan workshops and small boutiques, sometimes nothing beats a good old fashioned shopping center. Whether you’re looking for your high-street favorites or something a little different, Barcelona has a number of fantastic shopping malls to choose from.

Store, Shopping Mall
Located on the outskirts of Barcelona, La Maquinista is the largest of Barcelona’s shopping centers | © Courtesy of La Maquinista
Located on the outskirts of Barcelona, near the neighborhoods of Sant Andreu and El Fondo, La Maquinista is the largest of Barcelona’s shopping centers. It’s home to 221 stores spread across its 250,000 m² surface and its 3 floors, including a large dining hall with a number of restaurants and bars. In addition to men, women and children’s fashion it also has hardware stores, home furnishing stores, an Apple store, bookstores and multimedia stores. With two underground parking areas, it’s easy enough to access by car but the metro and bus stop just around the corner make it easy to get to via public transport too.
More Info
Open In Google Maps
2 Carrer de Potosí, Barcelona, Catalunya, 8030, Spain
+34933608971
View menu
Visit website
Visit Facebook page
Send an Email
Give us feedback

Shopping Mall
Outside Maremagnum | © Wilhelm Rosenkranz
Located in the old port of Barcelona, El Port Vell, the Maremagnum shopping centre is the only one of its kind – to be open on Sundays! While it may not be the largest shopping centre in town, it packs a lot in to its two floors, including a number of high-street clothes stores, jewellery and accessory stores and an eight-screen cinema. Open 365 days a year from 10am to 10pm, it’s handy for an emergency shop if you suddenly realise you desperately need something on a Sunday when everywhere else is shut.
More Info
Open In Google Maps
5 Moll d'Espanya, Barcelona, Catalunya, 8039, Spain
+34932258100
View menu
Visit website
Visit Facebook page
Send an Email
Give us feedback

One of the largest shopping centres in Barcelona, the Diagonal Mar is located in the Poblenou district by the beach, where the Avenida Diagnoal meets the sea. It’s home to a large range of high-street and designer labels for men, women and children, as well as homeware, cosmetics and accessories. The food hall has everything from suhshi to burgers, Spanish tapas to German beer-garten food and more – many of which are open until 1am most days of the week. The shopping centre can easily be accessed from the city centre by bus, metro and even tram line. 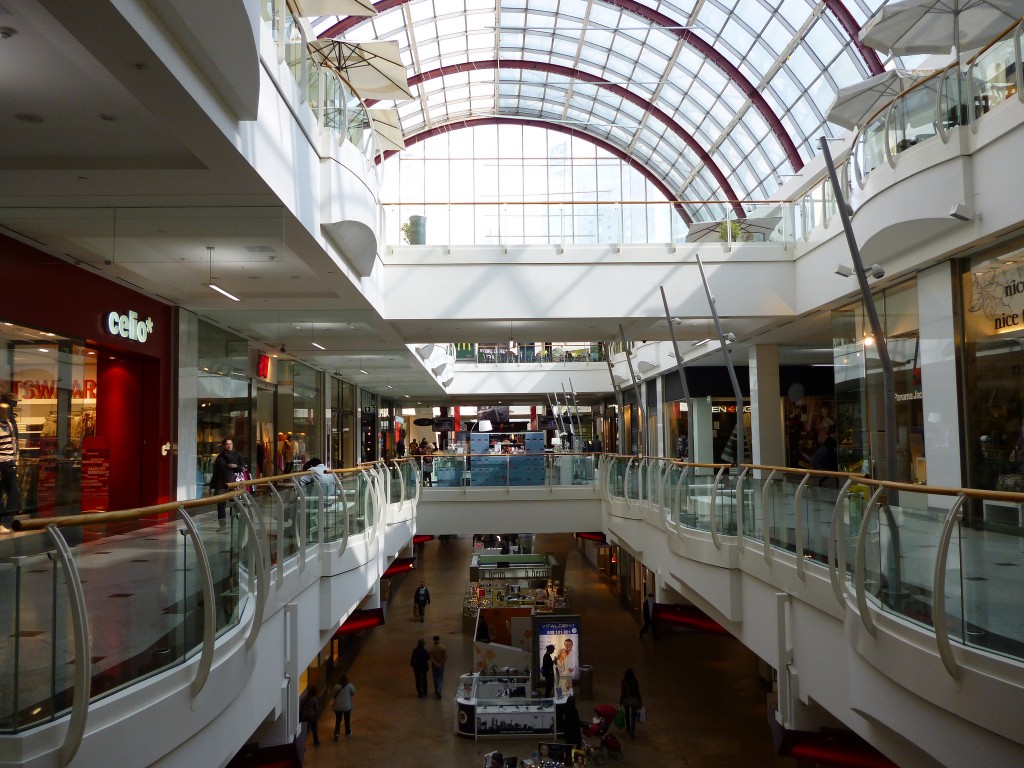 Located in the heart of the city’s financial district and home to many of the city’s wealthiest residents, the Pedralbes Centre is an upmarket shopping centre home to a number of designer boutiques and big labels. Open since 1989, it has always prided itself on offering an alternative to the high-street and pioneering new brands with a different approach to shopping. It’s also famous for its Christmas displays and the ice-rink that pops up each year much to the delight of younger shoppers.

Shopping Mall
Las Arenas | © Oh-Barcelona.com
The first thing you’ll notice at Las Arenas is the stunning outside appearance of this converted former bull-ring – known as an arena in Spanish – which has been propped up and maintains it’s original archways and detail, located at the top of the Avenida Parallel on the iconic Plaça d’Espanya. Aside from the many stores located on the five floors of the building, one of the most impressive features of Las Arenas is the 360º promenade on the roof that offers views of Barcelona and Montjuïc and is home to a number of restaurants and bars.
More Info
Open In Google Maps
373, 385 Gran Via de les Corts Catalanes, Barcelona, Cataluña, 8015, Spain
+34932890244
View menu
Visit website
Visit Facebook page
Send an Email
Give us feedback

Shopping Mall
Located in the heart of downtown Barcelona, just down the road from the aforementioned Pedralbes Centre, L’Illa Diagonal is one of Barcelona’s most upmarket shopping centres. Its creation was designed to inject new life into the area and support the emergent financial and business district at the time, and was one of the most important architectural projects of the era. In addition to its large choice of designer labels, the centre is also home to a sports centre, two hotels and even a school. Located on the Avenida Diagonal, it is conveniently connected to the the Diagonal Mar shopping centre by tram line.
More Info
Open In Google Maps
557 Avinguda Diagonal, Barcelona, Catalunya, 8029, Spain
+34934440000
View menu
Visit website
Visit Facebook page
Send an Email
Give us feedback

Cinema, Shopping Mall
Located on the outskirts of Barcelona, in the town of Hospitalet de Llobregat to the South-West of the city, Gran Via II is a large, multi-storey shopping centre covering over 54,600 m² and home to over 100 different stores, with everything from fashion to homeware and multimedia. The large, arched ceilings and marble floors of the shopping centre lend it an air of luxury and it is often more relaxed than some of the busier shopping centres in the city centre. In addition to its many stores, its also home to a large cinema complex which shows all the major films (usually in Spanish).
More Info
Open In Google Maps
75 Avinguda de la Granvia de l’Hospitalet, L'Hospitalet de Llobregat, Catalunya, 8908, Spain
+34932591762
View menu
Visit website
Visit Facebook page
Send an Email
Give us feedback
Give us feedback