Romeria del Rocio: A Guide to Spain's Most Traditional Festival 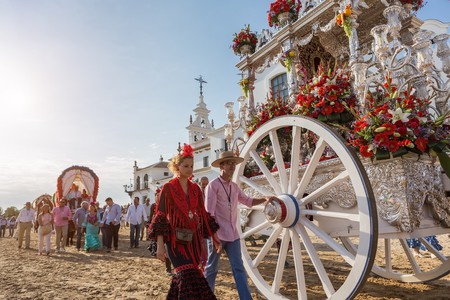 Every May, a small town in western Andalusia hosts a million people as they celebrate the Romeria del Rocio – Spain’s most traditional festival. Read on to discover what happens during this annual fusion of centuries-old religious tradition and sherry-fuelled hedonism.

Located on the north-western edge of Huelva’s vast Doñana national park, the tumbleweed town of El Rocio is something straight out of a Spaghetti Western. Its spacious, sandy boulevards are lined with enormous whitewashed houses that give onto Wild West-style verandas; outside bars and shops, there are wooden posts to which locals tie their horses whilst running errands or having a drink. Normally, this dusty, beautiful place is home to a population of about 1,650. But every year, during the weekend before Pentecost Monday and exactly fifty days after Easter, over a million people descend on El Rocio for a very special event. 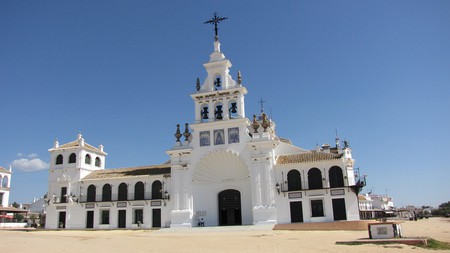 The Romeria del Rocio pilgrimage is one of Andalusia’s oldest and largest celebrations and arguably Spain’s most traditional feria. Its roots can be traced back to the 13th century when, according to the popular story, a local hunter from the village of Villamanrique came upon a statue of the Virgin Mary in a hollowed-out tree trunk in Doñana national park (a must visit in its own right).

Spaniards travelling to El Rocio from elsewhere in Andalusia often make the journey in the same way as the pilgrims of three hundred years ago did. They travel in ornately decorated gypsy-style wagons pulled by oxen, trundling slowly along minor roads or country tracks through western Andalusia. Others hook their wagons to the back of 4x4s or tractors and do the longer stretches of the journey by motorway. Women wear the beautiful flamenco dresses – trajes de gitanas or gypsy dresses – similar to the ones they show off at the big ferias and men wear smart grey trousers, short riding jackets and wide-brimmed hats.

People start arriving into El Rocio on the Friday before Pentecost Monday, transforming the town from a sleepy idyll to a scene of endless processions, competitions and parties. The grand old houses that line the sandy avenues are home to the 90-odd religious brotherhoods of El Rocio, and during the weekend they fill up with the hosts’ family and friends: Gatsbyesque extravaganzas play out on the big verandas and there are competitions, horseraces and open-air masses. This being Andalusia there is also, of course, dancing, sherry, wine, good food and a joyful, inclusive atmosphere. Endless rocieras – songs about the pilgrimage that sound like flamenco – are sung around spitting, glowing campfires. Visitor accommodation is virtually impossible to book, so many pilgrims and visitors camp out on the wild outskirts of the Doñana park, where storks and flamencos, lynx and boar roam wild. 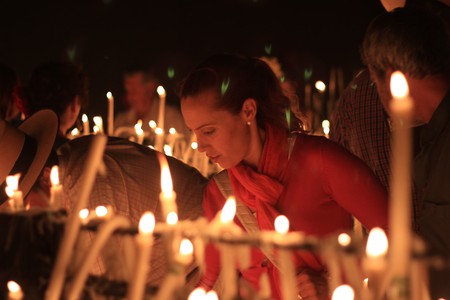 In the early hours of Pentecost Monday morning, the weekend’s partying reaches its finale and the statue of the El Rocio virgin (known as the White Dove) is brought out of her church and paraded around each chapel in town. As she makes her grand tour, the different brotherhoods clamour for the privilege of taking her to the next chapel; pilgrims push and shove each other to touch the glass case in which she is carried and adults weep with emotion as she sways and bobs past. The spectacle is not unlike that of Semana Santa in the major Andalusian cities, but the atmosphere is more chaotic and passionate and less hushed. It is precisely this combination – of centuries-old religious tradition with unrestrained, sherry-fuelled hedonism – which makes the El Rocio feria so special.