Restaurant Of The Week: Xiringuito Escribà 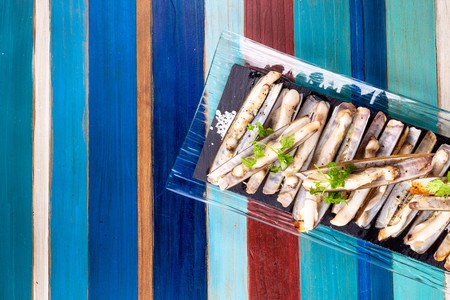 This week, Culture Trip Barcelona’s foodies checked out Xiringuito Escribà, located just on the waterfront of Bogatell Beach in Barcelona. Rumored to be one of the best paellas in town, we couldn’t help but find out for ourselves.

The clue is in the name: a xiringuito (or chiringuito in Spanish) is a small bar or restaurant which operates casually on the beaches, selling drinks and something to snack on to those enjoying the sea. They’re usually very informal and made of temporary structures which often disappear in the winter months. However the Xiringuito Escribà is by no means your usual xiringuito and keeps of its name only the seaside location and to some extent its laid-back atmosphere. The restaurant is open all year-round, and although most of the dining area can be open air, there is a roof for the rare days of bad weather. 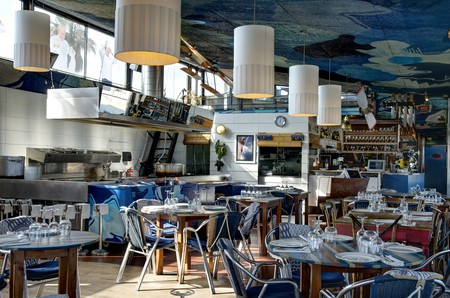 What you find at Escribà is a relaxed waterfront setting but with the convenience and sophistication of a full-blown restaurant. We visited on a Sunday and were pleased to find a mostly local crowd, with large families gathered around tables sharing paella and seafood. The atmosphere was friendly, relaxed and moreover buzzing – it felt like the place to be that Sunday. And being just a stone’s throw from the beach means that it’s easy to soak up the seaside feel without having to worry about getting sand anywhere. 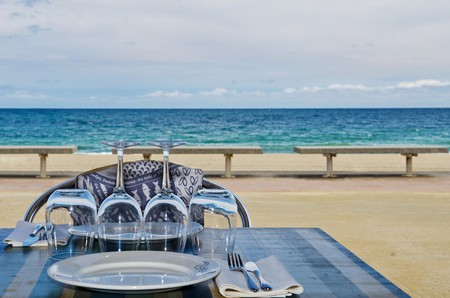 There are two main reasons people go to Escribà: the location and the paella. We had heard that the rice dishes on offer here were some of the best in town and were pleased to see that there was quite a selection of paella dishes on offer, including the Catalan version which uses a small noodle known as ‘fideua‘ instead of rice, the ‘mar y muntaña‘ – a ‘surf-and-turf’ type of meat and fish combination – as well as a traditional Valencian paella. 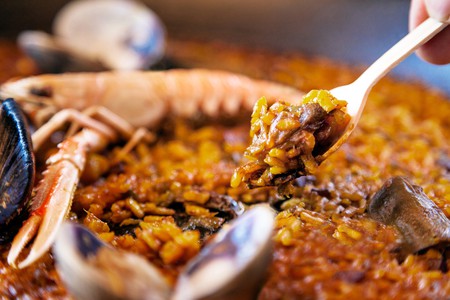 We tried the Escribà special paella, rich in seafood, and although the dish was generally well executed and clearly made fresh on demand, we felt it was perhaps a little on the salty side and could have benefited from a few more seconds on the fire to get that oh-so-special socarrat. But picking aside, this is clearly somewhere that takes its paella seriously. And for those who don’t eat fish or seafood, there were a few equally good sounding meat-based dishes on offer as well as two vegetarian paellas from which to choose.

If the name of the venue sounds familiar to you, it may because you’ve heard of the popular pastry shop in the center of town, the Pasteleria Escribà. You’ll be pleased to hear that it’s no coincidence, and the selection of desserts on offer is sure to satisfy even the most discerning of sweet-teeth. The desserts are presented to diners on a tray after the meal and include a diversity of fruit-based and other specialties: think passion fruit and white chocolate mousse, green tea mochi or a dark fruit and chocolate gateau. We tried two and were blown away by the quality and flavor, especially as there is a tendency amongst restaurants in the city to opt for pre-brought desserts and disappoint those of us for whom the last course of the meal is just as important as the rest. 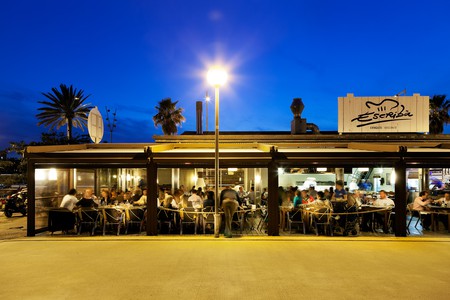 There was plenty to choose from on the wine list, which was composed of mostly classic Spanish wines, with prices ranging from about €20 to €40. We ordered a bottle of white wine which had been recommended to us for the meal and were pleased with the match. We also tried the sangria which was fresh and not overly sweet.

There’s definitely a reason the restaurant is as popular as it is: it offers great seafood and paella prepared right before your eyes in one of the most unique settings in Barcelona. There’s no other place in the city we can think of where you can enjoy a three-course meal with white table cloths so close to the waterfront. The waiters were friendly and patient despite obviously been rushed off their feet and were happy to help us choose wine and answer any other questions about our food. While the question of whether this really is the best paella in town remains unsolved, one thing is sure: Xiringuito Escribà is a Barcelona classic which has well earned its place in the hearts of locals.