Madrid Neighbourhood Guide: Where To Stay in the City 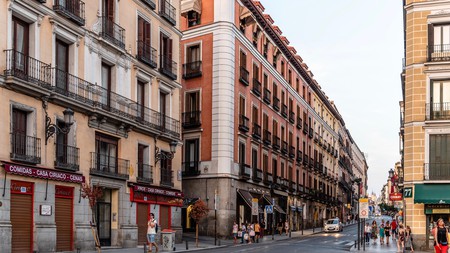 Whether you are looking to stay in one of Madrid’s buzzing central neighbourhoods or a more laid-back residential district, this neighbourhood guide will help you find the perfect place.

The centre of Madrid is split into distinct neighbourhoods, or barrios, each with its own personality. Deciding on which barrio to make your base when visiting the capital is one of the most important first steps when planning your city break. So whether you want to be in the centre of all the action surrounded by art and culture, or experience the Madrileño lifestyle in a more residential district, these are the best areas to stay in Madrid. 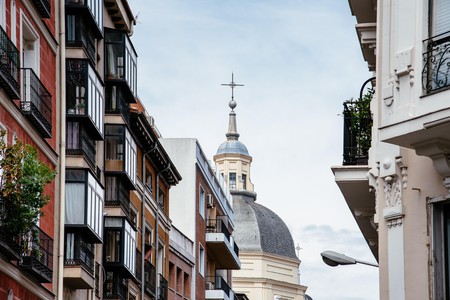 Located in the south of the city, the Lavapiés neighbourhood is known for its international food scene | Architect´s Eye / Alamy Stock Photo

Sol takes its name from the busy Puerta del Sol that was once used as a gate into the city. Today, it is one of Madrid’s central meeting places, where every year on 31 December, Madrileños ring in the New Year with a celebratory fireworks display. The surrounding area is home to Madrid’s oldest buildings, and some of its main sights include the Plaza Mayor, the Royal Palace and the Almudena Cathedral. It might be a tourist spot, but big chains have not completely taken over. Sol is still home to some of the city’s oldest shops that sell everything from handmade fans and umbrellas to espadrilles, sweets and leather goods. Look out for the golden plaques on the pavement outside shops that denote that the establishment is over a century old. There are insider sights, too, including the Convento del Corpus Cristi, a convent of cloistered nuns who make their living by selling biscuits. 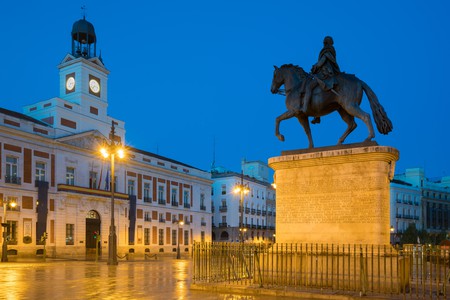 In the 1980s, this vibrant barrio just north of the centre was the heart of the counterculture movement, La Movida Madrileña. After the death of dictator Francisco Franco in 1975, the youth movement blossomed and took over the streets of Madrid. The area has retained its punk spirit, and is home to a number of bars, vintage shops, record shops and little squares ideal for enjoying an afternoon beer. The epicentre of Malasaña is Plaza del Dos de Mayo, a square surrounded by bars and restaurants that commemorates the uprising of Madrid’s residents against Napoleon’s invading troops on 2 May 1808. The square is family-friendly with play parks and outdoor terraces, making it ideal for a lazy afternoon with kids. Join a graffiti tour to discover some of the best local and international talent to have tagged the walls of the barrio. 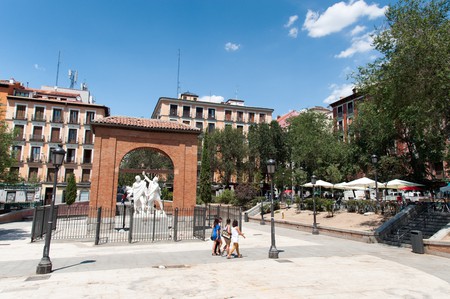 Madrid’s hip area of Malasaña is popular with students and creatives, and is home to a number of boutiques and vintage shops | Alex Segre / Getty Images

The hilly barrio of Lavapiés, just south of the centre, has long attracted newcomers to the city. With its vibrant and multicultural identity, its global food scene is now legendary. This is the place to explore flavours from Senegal and India to Greek, Italian and Venezuelan dishes. Lavapiés is also home to Madrid’s traditional ‘corrala’ housing, which consist of apartments set around a central patio which were popular between the 17th and 19th centuries. You can see one side of a ‘corrala’ on Calle de Mesón de Paredes. Don’t miss nearby el Rastro, Madrid’s biggest street market, held in La Latina on Sundays and public holidays; go early, at around 9am, to beat the crowds and find second-hand treasures. Stop for a beer (una caña) and some tapas in bars along the market’s route. The Tabacalera, a grand building that formerly housed a tobacco factory, today hosts art exhibitions and is a great place to explore the barrio’s artistic identity. 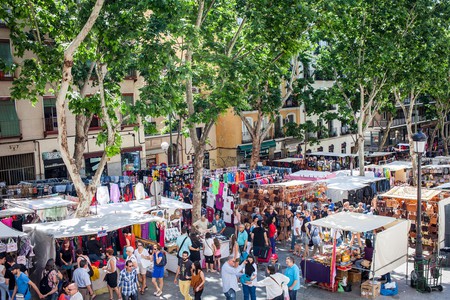 Home to a tree-lined boulevard, Madrid’s most famous park and some world-class art galleries, the area around Retiro Park is a great base for those wanting to explore Madrid’s world-renowned art scene. It’s also home to some of the city’s most exclusive hotels, from the Westin Palace (a favourite of Ernest Hemingway) to the Ritz. It is the ideal location for those wanting to combine culture and activities on their city break. Visit Picasso’s Guernica in the Reina Sofia in the morning and rent bikes or rowing boats in Retiro Park in the afternoon. The museums in Madrid’s ‘Golden Triangle’ of galleries – the Prado, the Reina Sofia and the Thyssen-Bornemisza – are all located in the district, along the Paseo del Prado. Other sights include the Caixa Forum museum, which holds regular sociocultural exhibitions and has a serene outdoor garden wall. You can also explore Madrid’s botanical gardens and the Palacio de Cibeles – home to Madrid’s City Hall where you can find impressive views of the city from the viewing platform. 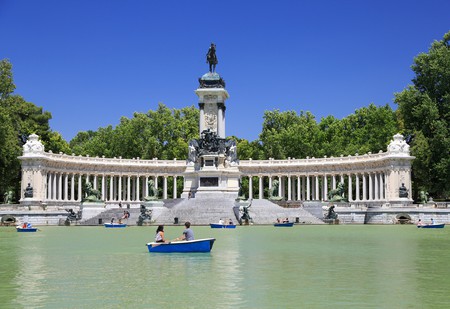 Historically known as Madrid’s literary neighbourhood, Barrio de Las Letras is a buzzing mixture of culture and nightlife that takes its literary greats as seriously as it does its late-night bars. The sloping area of Huertas is known for its bars and restaurants and is surrounded by picturesque streets. Over the years, Las Letras has been home to some of Spain’s greatest writers, from Miguel de Cervantes to Don Ernesto himself, Ernest Hemingway. Visit the pretty house and courtyard of Spanish playwright Lope de Vega, browse flamenco shops for some new polka-dot shoes or a statement shawl, and do some bar-hopping late into the night. Many of Hemingway’s favourite Madrid drinking holes can be found in this barrio, from the wood-panelled Cervecería Alemana to La Venencia, a sherry bar that was a watering hole for Republicans during the Spanish Civil War. 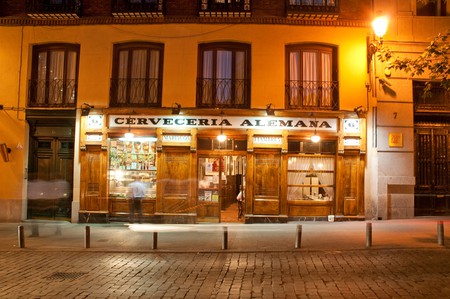 Just north of Gran Via, Chueca is the home of Madrid’s LGBTQ community. It is also the centre of the city’s annual Pride celebrations at the end of June and beginning of July. If you’re in the city for Pride, don’t miss the yearly celebrations including a ‘stiletto race’, where drag queens tear down one of Chueca’s streets in a running race for ultimate glory. Chueca is also home to a number of fashion and homeware boutiques, as well as hip cocktail bars and classic old taverns such as Stop Madrid and Taberna de Angel Sierra. The Calle Augusto Figueroa area is famous for its shoe shops and is also home to Mercado San Antón, a converted food market that sells fresh produce and Spanish street food. Be sure to grab a seat on the roof terrace after a long day of shopping. 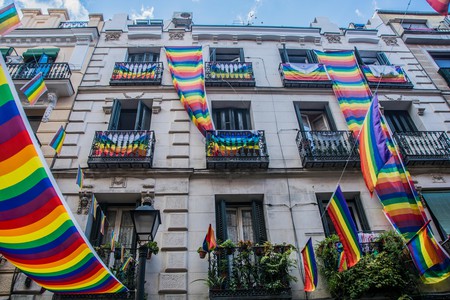 Just south of the centre, this mainly residential district is ideal for those wanting to experience a flavour of day-to-day Madrid, off the tourist track. It’s an easy walk into the centre, but is also next to Madrid Río, the city’s riverside park that has a much more local vibe than the more famous Retiro. Here, people come to walk, jog and cycle, or bring their kids to play parks that line the route. Walk along the river to the Matadero, a former slaughterhouse that has been transformed into a huge cultural centre where visitors can see exhibitions, watch a documentary at their cinema or try local produce at the weekend farmers markets.