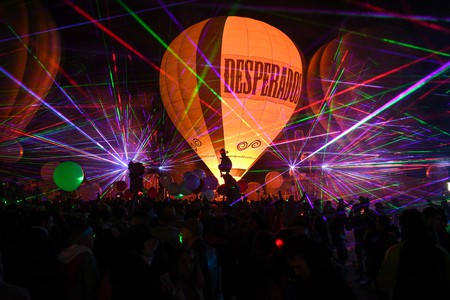 SkyFest, billed as the world’s first hot-air-balloon electronic light orchestra, took place in Spain recently, and it looks like it might be the way to go for all future music festivals…

Created by Desperados, SkyFest was held in the foothills of the picturesque mountains in the Le Seu area of Spain. Over 1,500 partygoers were in attendance and they were not only treated to a spectacular light show but also revelled to the sounds of some of the world’s best DJ’s.

Emerging from the darkness, the balloons themselves were part of the orchestra. Each pilot (the official term for a hot-air-balloon operator) became musicians in their own right, timing their ascents and descents to the pulsing beats. The light show covered the guests and added to the spectacle, despite the bitter cold of the night. 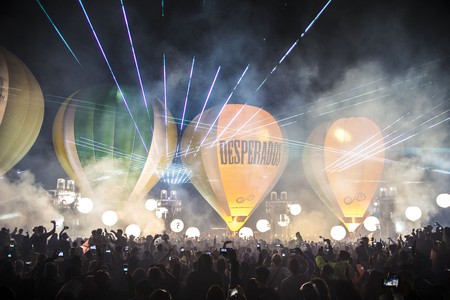 ‘Playing from a hot air balloon and looking down over the crowd was crazy. A real pinch yourself moment. It was surreal to perform at such a unique festival with so many people from all over the world. It was an incredible music experience and one of the reasons I love doing what I do,’ said Jackmaster, who performed on the night.

Desperados have previously created Train Trax, an event that saw a train in Warsaw turned into a musical instrument, and Bass Drop, where a party was held 30,000ft in the air in Nevada, on a plane that then pulled off a zero-gravity plummet.

Expect something even more extraordinary next year…
SaveSave