A Beginner's Guide To Spanish Wine 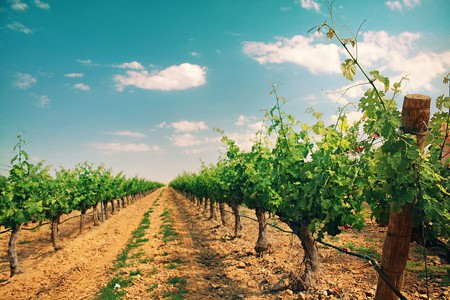 Spain is the third largest producer of the wine in the world, behind only France and Italy, and is famous for big names such as Rioja and Ribera del Duero. With so much to choose from, navigating a Spanish wine list can be a little tricky if you don’t know what to look out for. We’ve compiled an easy guide to understanding and appreciating the best of Spanish vino.

The History Of Wine Making In Spain

The history of viticulture in Spain is long, with evidence of grapes growing in the area as far back as the year 4000 BC. Under the Roman empire, Spanish wine was traded across Europe and the Mediterranean but was hampered during the Moorish invasion of the Iberian peninsula from the 8th Century onwards. By the 14th Century, Spanish wine was once again being sold across Europe, especially in England where it would be shipped straight from Bilbao to Bristol in regular supply. During the colonisation of the Americas, Spanish missionaries brought vines with them and introduced viticulture to the conquered lands. In the 18th and 19th Centuries, Spanish wine production benefited from the phylloxera epidemic which ravaged many of the French old vines and created a shortage in European supply. Many French producers moved to Spain bringing with them their expertise and introducing progress in the production method. For a long time, Spanish wine was considered by some of inferior quality to the wine of its neighbours, but since the late 20th Century, Spain has established itself as a serious producer with some top quality wines appreciated the world round. 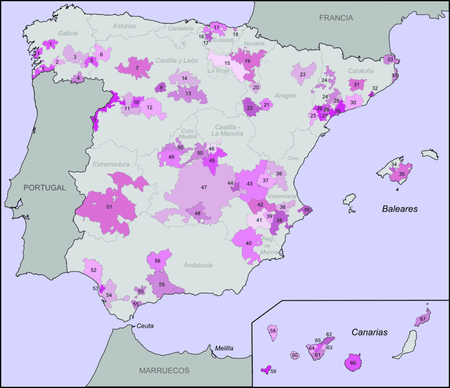 The D.O. regions of Spain in purple | © Tyk / WikiCommons

There are a number of wine producing regions spread across Spain, each with their own distinctive geographical qualities and climates which influence the properties of the wine. There are two broad classifications of wine in Spain: ‘vino de mesa’ or ‘table wine’ and ‘Vino de Calidad Producido en Región Determinada’, the latter being used to refer to wines which are produced in specific regions and meet certain requirements of quality. Many of the names associated with superior Spanish wines refer to one of these particular regions, such as ‘Rioja’, ‘Priorat’ or ‘Ribera del Duero’. This is equivalent of the French practice of referring to wines by the region in which they are produced, for instance ‘Bordeaux’ or ‘Sancerre’. Within the general category of wines from a specific region, there are four subcategories of which the most commonly encountered (accounting for a vast majority of Spanish quality wine) is known as Denominación de Origen (DO). When choosing wine from a list, look out for the letters ‘D.O’ as an indication of the superior quality of the product. Here are some notes on the most popular Spanish wine producing regions.

Rioja: produced around the La Rioja region, the Basque country and Navarre, D.O. Rioja wines typically display oaky notes as result of maturing the wine in oak barrels. Those in search of a pronounced oaky flavour should look out for the mention ‘Gran Reserva’ indicating that the wine has been in oak for at least two years. Best known for its full-bodied reds, oaky white Riojas are also very popular.

Priorat: this is one of the highest quality wine-producing regions in Spain. Located in the region of Catalonia, the volcanic nature of the soil in which the vines are grown gives the wine a distinctive flavour; it also means that yields are much lower than in other regions due to the hardy conditions. Best known for its distinctive reds which have continued to grow in popularity since the 1990s. 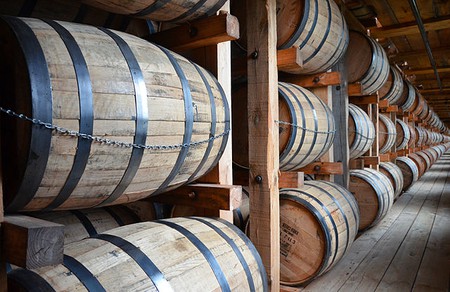 Ribera del Duero: named after the river Duero which runs through the area, this is a mostly red wine producing region home to one of the most famous bodegas in Spain, Vega Sicilia. The region now rivals the Rioja region as one of the largest wine-producing regions in Spain and is growing in popularity among foreign drinkers, attracted to its full-bodied and oaky flavour.

Cava: one of the most widely spread regional appellations, the name ‘Cava’ refers to the sparkling white wine mostly produced in the region of Catalunya. Although not enjoying the same repute as French ‘Champagne’, cava is becoming increasingly well-known on the international stage and enjoys great popularity at home in Spain. Look out for ‘método tradicional’ as an indication that the fizz has occurred as a result of a natural process of fermentation.

Sherry: known in Spanish as Jerez, this is the home of the classic fortified wine generally referred to as Sherry. However there are many different kinds of Jerez, varying from syrupy and sweet (such as Pedro Ximenez) to crisp and dry (such as Fino or Manzanilla), with many in between (such as Palo Cortao, Oloroso or Amontillado in growing order of dryness). 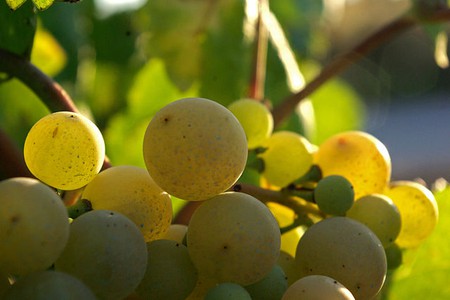 There are many other regional appellations from which excellent wines are produced and are well-worth exploring when in the area. Anyone in Catalonia should not miss an opportunity to try a D.O. Rueda wine, just as those in Galicia should try a D.O. Rías Baixas. In any case, locally produced wines will always be the best accompaniment when enjoying the local cuisine, as the flavours tend towards a wonderful natural harmony.