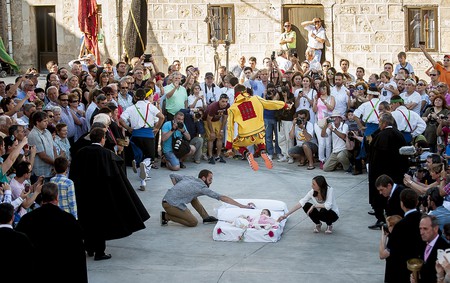 Celebrated each year in the small town of Castrillo de Murcia, the Salto del Colacho is a week-long celebration which culminates with a man dressed as a devil terrorising locals and jumping over babies. Controversial as far as the Catholic Church is concerned, the celebration is believed to cleanse the new-borns of their original sin.

Although there is no record of when the first Salto del Colacho or ‘Jump of the Colacho’ was organised, local historians believe it has taken place every year since at least the 1600s. Since its inception, the Catholic Brotherhood of the Sacred Sacrament of Minerva have been responsible for the organisation of the week-long celebration which takes place to mark the Corpus Christi feast. 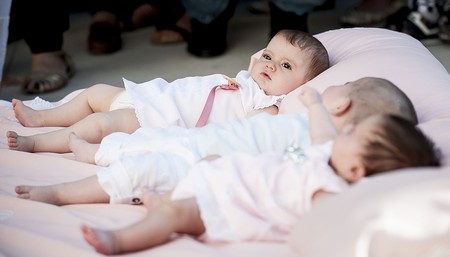 If Spain is already famous for its original festivals – such as the tomatina tomato throwing festival – El Colacho is yet another wholly unique celebration. The high-point of the festival is on the final Sunday when the Salto del Colacho takes place. On this day, the Colacho – a man dressed as the Devil wearing a colourful outfit and a mask – runs through the town with a whip to terrorise locals who launch insults at him in return. But this is just a warm-up for the main event: the baby-jumping.

When the time comes for the ‘salto‘ or jump, the tradition has it that all babies born within the year in the town of Castrillo de Murcia are presented on a mattress on the floor outside their house. In some cases, babies have been known to be just a few weeks or even days old. Then comes the moment when the Colacho – representing the devil – jumps over the infants as onlookers cheer him on. 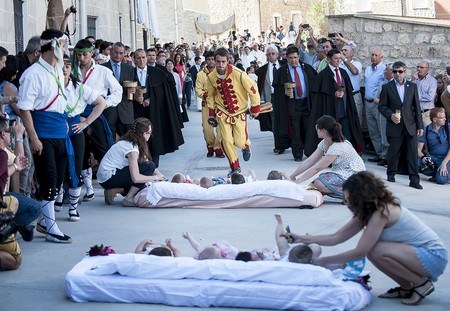 The Colacho prepares for the jump | © Samuel de Roman/REX/Shutterstock

This unusual act is said to cleanse the new-borns of their original sin, which Christians believe all human beings carry as a result of Adam and Eve’s disobedience towards God in the Garden of Eden. However, these days it’s also considered an important cultural festivity which belongs to the local heritage of the town.

After the Colacho has jumped over the babies, they are showered in rose petals and often blessed by the local priest before being collected by their parents.

Despite its religious foundations, the El Colacho festivity has been frowned upon by the highest Catholic authorities. Pope Benedict has recently instructed Catholic priests in the area to distance themselves from the practice as it is considered to go against traditional Catholic practices.

In many places, babies are welcomed into the religious community – and pardoned for their original sin – through the ritual of baptism. Here the baby is blessed by the priest who pours water over the child’s head. In contrast, El Colacho is seen as unorthodox and something certain members of the Catholic Church would rather see disappear.

Yet despite the controversy the town of Castrillo de Murcia continues to celebrate the Salto del Colacho each year. It seems that a tradition that has survived for over four centuries is unlikely to vanish any time soon.