Though the museum of Salvador Dalí is located in his hometown of Figueres, Spain, ghostly impressions of the famous Surrealist artist can also be found in nearby Barcelona. Dalí often visited the capital of Catalonia, and today’s visitors can track his footsteps and take a seat at the corner table in one of his favorite restaurants, or explore a hotel where he once hauled an entire taxidermy horse up the staircase.

In a dining room full of still lifes and Realism paintings, one Surrealist picture hangs above a corner table like a wink. Here is where Salvador Dalí used to sit at Via Veneto, an often-awarded Michelin-star restaurant in Barcelona. And it’s here where Dalí once requested a soup infused with flowers from a cemetery. 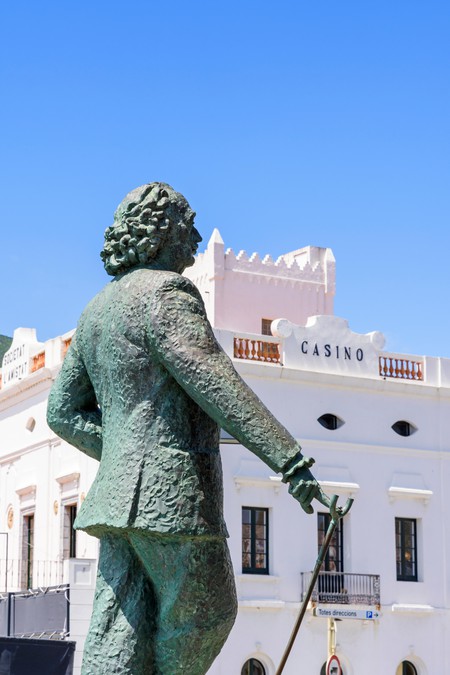 Dalí dined at Via Veneto about two to three times per week on his visits to Barcelona in the 1970s, according to Pedro Monje, director of the restaurant. And the macabre meal with essence of the grave wasn’t the only unusual order from the famous Surrealist painter. “[Dalí] said to me, ‘I would like to order 13 butifarras that span three-and-a-half times around. It’s very important,’” says José Monje, owner of Via Veneto and Pedro’s father. A butifarra is a chain of Spanish sausages linked together in a loop. “We put the 13 butifarras on a silver plate and brought them up… He said ‘Fantastico!’ He thumped his cane and laid it against the side of the table, got up and took the plate with the butifarras, lifted one and went to the first woman [in his party] and hung it on her, between her breasts.” When all 12 of his female companions were wearing the meat as necklaces over their elegant gowns, Dalí and his group left to go to a party at the Ritz Hotel.

The Ritz Hotel, which now is called El Palace Hotel, was another establishment Dalí visited often in the mid- to late-1900s. The room he slept in is preserved today as the Salvador Dalí Suite, where guests can stay and still relive much of the same luxury experience. It’s to this room that the Spanish artist once brought a taxidermy white horse, hoisting it all the way up the hotel’s grand staircase, as a gift to his wife, Gala. 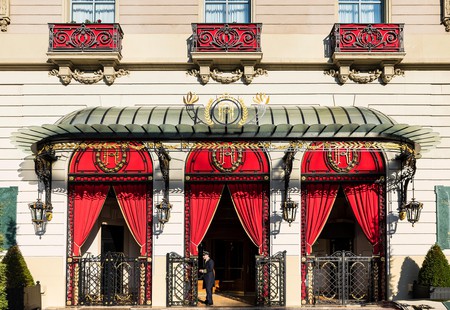 El Palace Hotel was a favorite haunt of the Surrealist painter, where guest can still stay in the Dalí suite | © Mira / Alamy Stock Photo

Nearby, Bar Marsella leaves another ghostly impression, with its chipped paint, cracked tiles and dusty liquor bottles that once served Dalí and many other famous artists at the time. While the curious can learn more on daily tours of the bar in the afternoons, in the evenings servers will simply tell you with a shrug, “Yeah, sure, all the old famous people used to come here.” They’ll then return to doing as they’ve always done – serving absinthe – in this old bar where the clock hands never move. 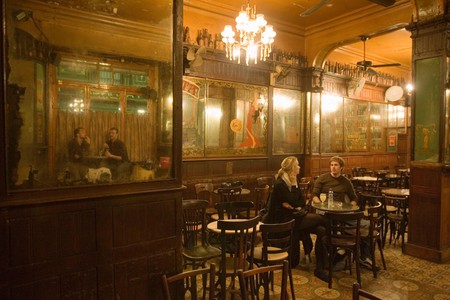 Hemingway, Picasso, Dalí – many famous people in the 1920s used to visit Bar Marsella, which still looks like a relic of the past | © agefotostock / Alamy Stock Photo

An urban legend exists that some famous painters from these times used to paint images on the spot in exchange for a paid dinner bill and other expenses. Dalí did reportedly use this magic chequebook to pay Dr Edmund Klein for skin cancer treatment in Buffalo, New York, in the ’70s, but there is no record of him having done similarly in Barcelona. However, Pedro Monje confesses that he has considered how valuable Dalí’s old receipts from Via Veneto, signed with his name, would be today. “My father always says [Dalí] never paid on the spot,” he says. “He signed bills, and we sent the bills to the Palace Hotel, the Ritz in that moment, and the secretary of Dalí paid the bills. If instead of sending those bills for payment, we kept them, right now they would be much more valuable for the signature than for the price [of the dinner].”

Yet the Monjes do have one remaining signature from Dalí: a dedication to José Monje written inside a rare first edition of a cookbook Dalí published. Next to the signature is a simple drawing of a monk the artist made in reference to the proprietor’s last name. This cookbook, titled Les Dîners de Gala, contains some eccentric recipes (including pine cones with toffee, frogs, snails and towers of prawns), a section on aphrodisiacs and original drawings from Dalí scattered throughout the pages. Dalí wrote that the quirky cookbook is “too lively, too aggressive and far too impertinent” for people who care about healthy food or counting calories.

For the Monjes, their cookbook, dedication and photographs of Dalí are possessions they don’t boast about loudly and only show upon special request. Interested diners can arrange to have a meal of all of Dalí’s favorite dishes at Via Veneto if requested in advance and with a minimum amount of guests, but otherwise the mention of Dalí’s presence is respectful and discreet. 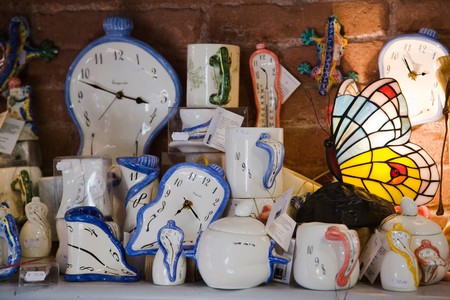 Dalí’s famous melting clocks, from his painting ‘The Persistence of Memory’, can be hunted down in gift shops in Barcelona, but their presence is scattered and quiet | © Kim Karpeles / Alamy Stock Photo

Like his signature tucked into a page of a book in a backroom, Dalí’s impression on Barcelona isn’t screaming loudly. Only the Real Círculo Artístico de Barcelona (Royal Artistic Circle of Barcelona) holds a current exhibit of Dalí, though the Dalmau Art Gallery proudly claims to have held his first exhibition in 1925. In this way, memories of Dalí’s time here seem to be the bigger inheritance for the city. The stories of Dalí in Catalonia are for those who want to connect with his eccentric life here and find a touch of surrealism in everyday Barcelona.