Cervantes in Seville: The Prince Of Spanish Wit In Andalusia 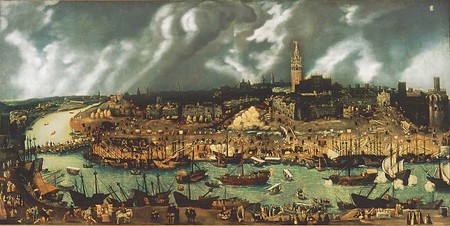 Miguel de Cervantes — author of Don Quixote — died 400 years ago this year. Spain, and Madrid in particular, are rife with adoring tributes to her most famous literary son. A Madrileno through and through, Cervantes was born and died in the capital city’s region. But as you can imagine of the man who dreamed up Don Quixote and Sancho Panza, his life was a criss-cross of adventures from Turkey to Algiers, and Naples to Seville. The Andalusian capital, which, in Cervantes’ time, was the center of the world and where Cervantes set so many of his novellas. Today, you can find traces of the great writer throughout Seville. Let’s take a wander… 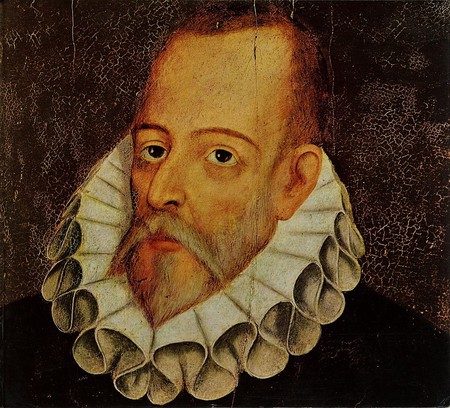 Cervantes’ time was Seville’s Golden Age. Galleons arrived daily loaded down with gold and silver gleaned from Spain’s overseas empire. Such a mercantile city attracted a diverse population of bankers, merchants, tax collectors, pirates, and as the song goes, gypsies, tramps and thieves. It was a heaving, sun-soaked, sweat-drenched hive of New World ambition and bravado. It was a city of passionate exchanges, murderous looks and dark alleys where all manner of good and evil took place. In other words, the perfect place for a writer to craft an adventurous tale about self-fashioning, loyalty and imagination told in the vernacular language of the streets.

Cervantes had moved to Seville in the last decades of the 16th century, as he had taken up a post as the official tax collector for cereals and olive oil in Andalusia. Tax collection in the hinterland of Andalusia in the 16th century wasn’t exactly scientific. And then, as now, tax collectors found themselves fudging the numbers. Cervantes was caught red-handed and did his first stint in a jail in Castro del Rio. He was released within days and was soon back to work. However, it wasn’t long before he was in trouble again. He had agreed to collect back taxes in the Kingdom of Granada, a notorious hinterland full of criminals. Nonetheless, Cervantes successfully collected what was owed to the crown. He deposited the money with a Sevillian banker and that was that. However, in a stroke of bad luck (or fate), the banker went bankrupt and Cervantes’ accounts with the Crown were left unpaid. He was arrested and thrown back into prison, this time in Seville. As the story goes, the idea for Don Quixote came to Cervantes while we was serving time in Seville’s Royal Jail in 1597. His time spent there is commemorated by a bronze bust that lives under the shade of a palm tree on a street called Entre Carceles — in between the jails. 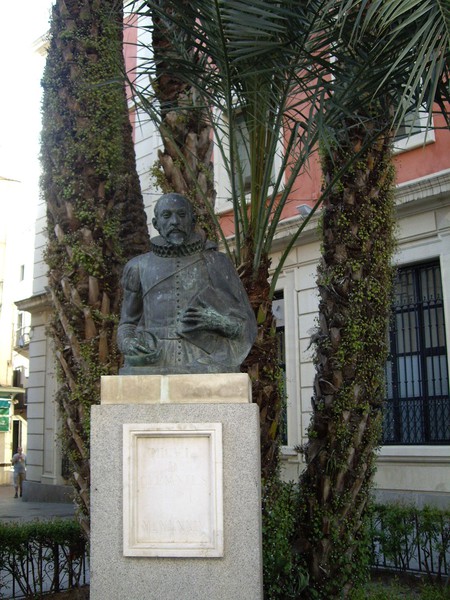 It is no accident that the Royal Jail in Seville inspired Cervantes to invent the indelible Don Quixote. The jail was full of… well, it was… full. At any one time it contained 1,800 of some of the wickedest characters to be found in the Spanish Empire. Unlike modern day prisons, the Royal Jail when Cervantes was there was a lively microcosm of Seville with merchants who set up stalls in the courtyard, dancers, fiestas and all manner of food and drink. It was a thriving market – the only difference between it and the markets outside its walls were that its customers were thieves, blasphemers, pirates and adulterers. Ample material for a man like Cervantes who would have spent his days earning money writing letters for illiterate prisoners. Literary historians must grow misty-eyed imagining the number of letters that circulated throughout Spain written by Cervantes on behalf of some crook or other, and that were relegated to the trash. 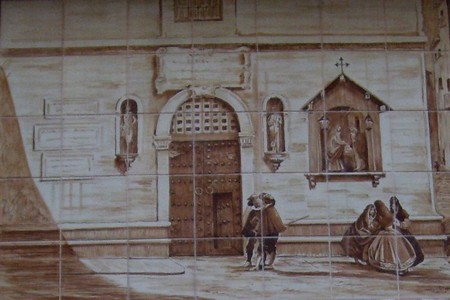 The jail was just one of his haunts while he lived in Seville, but he made his mark on others as well. In a nod to the deep Catholic roots of Seville and the processions of Holy Week that mark Jesus’ walk to Gethsemane, the literary route that marks Cervantes references to Seville is named the Via Crucis Cervantino; The Cervantino Way of the Cross. It is marked by a series of tiles laid out for the 300th anniversary of this death, in 1916. These 17 tiles mark locations in the city that appear in Cervantes’ works. Following their path allows the Cervantes aficionado an intimate glimpse into his work, a chance to transcend time so that yourself following in the exact footsteps of this literary genius. The route will bring you through the heart of the city. There are several tiles in the streets that run around Seville’s Grand Cathedral. One of them is next to the Door of Forgiveness in the Calle Alemanas, that refers to the novella Rinconete and Cortadillo. Another can be found nearby at the entryway to the Patio de los Naranjos. It commemorates Cervantes’ sonnet in honor of (or critique of – depending on who you ask) of the monument that was erected in the Cathedral upon the death of King Philip II in 1598. The tile quotes the opening lines of the sonnet: “By God! The terrifying enormity of it”. The sonnet goes on the satirize the decadence and expose the decline of an empire obsessed with appearance and pretence. Having just been released from jail, Cervantes was, perhaps, in no mood to sing the praises of Spain. 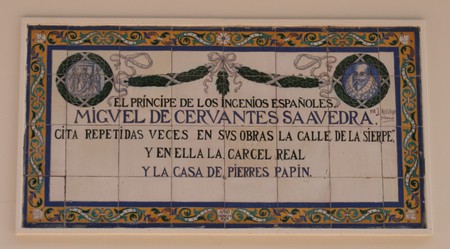 Wandering up Sierpes, Seville’s main commercial artery, now a mix of chains and local institutions, a reminder of this city’s imperial, mercantile, swashbuckling past catches the mid-morning sun and glows brightly from above. The white tile reflects that this street was once Cervantes’ playground; his meeting point for so many frank discussions about writing, representation, and the state of Spanish politics. Seville — which Cervantes called the “noble spirit of triumphant Rome” — is still inspired by Cervantes, just as he was inspired by it.