Barcelona is a city well known for its terrace life. On nice days, however, it’s almost impossible to find a square of sunshine that hasn’t already been taken — patios and plazas full night and day. Nevertheless, a little hunting turns up a small but healthy array of hidden terraces in the city where it’s possible to sit and enjoy a quiet moment or two away from the crowds. 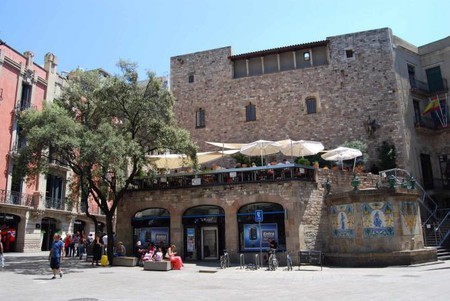 Between its restaurant school and its collection of restaurants, Hofmann is a well-known name around town. Their best-kept secret, however, is the small terrace space they have hidden above the La Seca Theatre on a narrow street in the neighborhood El Born, just off La Rambla del Born.

The menu is pica-pica style, with a selection of fairly standard tapas dishes that taste anything but. Each one is a new surprise, from the simply dressed tuna belly salad to the Gallego-style octopus drizzled in olive oil with the piquant bite of Vera pepper (which is much like paprika). The most impressive dish, aside from their cocas, is the Korean pork buns, which are the perfect balance of melt-in-your-mouth pork belly, tangy BBQ sauce, and a soft airy bun.

But that’s no surprise because bread is clearly Hofmann’s forte — their flaky buttery croissants are a prime example. It would be remiss, however, to leave without trying the coca bread — a soft, yeasty long fermentation bread — piled high with a number of different toppings, from rich tomino cheese and jamon to smoked salmon with a touch of wasabi. No matter what, be sure to save room for dessert.

El Cercle is not so hidden even though it flies well under the radar. Its location in the middle of the Gothic Quarter, at the end of the torrent of shops that line Portal de l’Angel, would seem obvious, but between its unlikely entrance at the Reial Cercle Artistic de Barcelona and the distractions of the commercial zone it calls home, the space remains more or less duly hidden from the hungry masses. That it is a cut above might also turn away weary tourists from its doorstep, and that’s okay too because El Cercle is worth keeping under wraps.

Not only does it sport a pretty little terrace, but it’s a great place to try the local cuisine. Despite the bar area that serves up a formidable Japanese menu of exceptional sushi and sashimi, El Cercle is undoubtedly a Catalan restaurant at heart, with a menu that takes a new approach to old favorites. Fresh baby squid are paired with jamón ibérico and a purée of potatoes laced with Parmentier cheese, a rillette of mackerel is pickled in a tangy acidic marinade à la escabetx, soft tuna belly — a vermouth menu favorite — is paired with roasted peppers and hard boiled eggs. Not one to forget its roots, El Cercle brings in white beans (mongetes) from Ganxet to make the savory salt cod salad known as empedrat — as Catalan as any dish can get.

Plaça Neri is one of the best plaças in Barcelona and not for its convivial plaça culture but for its history. A small triangle of spaces secreted in the Gothic Quarter behind Carrer del Call, the space stands in the shadow of an overhang of trees and the old church, whose walls are mottled with bullet holes from the Civil War.

The hushed atmosphere is pierced by the rushing water of the plaça’s fountain and the exuberant shouts of children passing through. Late afternoon, when the shadows start to grow long and the crowds grow thinner, is a good time to visit to see this remarkable slice of history. However, it’s not the only hidden space worth seeing. Head up to the top of the Hotel Neri and discover their small terrace bar. Grab a cocktail and bask in the quiet, a hard thing to find in bustling Barcelona. 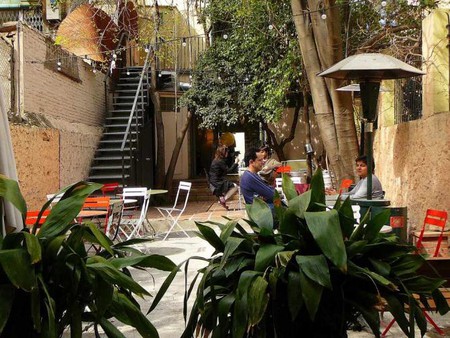 Step into the quaint back garden of Fragments Café | © marimbajlamesa/Flickr

Nestled into a beautiful little plaza in Les Corts, Fragments Café is well known among those in the know for their excellent gin tonics, memorable tapas, and great terrace culture. While most people fight for a table outside in the plaza, it’s even better to grab a seat in the secret garden at the back of the restaurant, where guests can enjoy an intimate space perfect for a quiet meal.

Choose from a menu of dishes, which feature the freshest local ingredients, in a preparation that leans ever-so-slightly toward the influences of Italian cuisine. The tapas menu includes impressive patatas bravas, which should be the first plate on the list, but don’t miss the stand-out items like Manchego cheese drizzled in pink peppercorn-infused olive oil, the tuna tataki, a cube of lightly seared tuna floating in a berry sauce, or the simple roasted eggplant. Reservations are recommended in order to get a seat in the garden for lunch or dinner.

The Teatre Antic is not just a theater but a gathering place for many of the city’s locals and ex-pats who believe that that the outdoor café space is the best feature. Hidden off one of the narrow streets near Santa Caterina market, the theater is itself easy to miss.

Its tiny gated entrance leads up into a charming garden space where it’s possible to sit in the shade on nice days with a beer and some patatas (potato chips) and while away the hours. It’s so hard to find a spot of quiet in the city that it’s hard to leave. On nice days, space is at a premium, so it’s worth trying to avoid the vermouth hour — early Sunday afternoons or early evening on the weekdays. 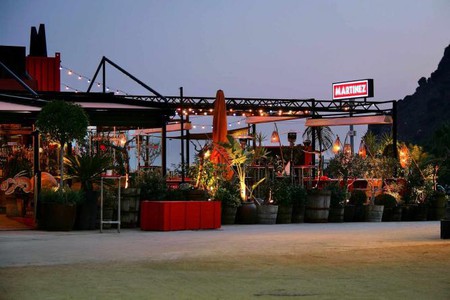 Martínez isn’t easy to get to, let that be said. But it’s worth the taxi ride or a short hike uphill to reach it because it not only offers one of the best terraces in town but also stunning views of the city and its beaches from the sturdy heights of Montjuïch. The jaunty red umbrellas and colored lights of its well-dressed terrace are a welcome sight on a warm summer evening.

Grab a table harborside for some stunning views and order any of the tapas dishes on the terrace menu for a pica-pica style aperitivo, or come hungry and delve into one of the hearty rice dishes for which they’re known. The seafood is highly recommended: the well-sourced oysters are a great place to start, the mussels in Provencal-style tomato broth come in an impressively large bucket for the price, and the cazuela of seafood in a rich aromatic broth will make you glad you came.

It’s easiest to arrive by taxi from the center, but it’s also possible to reach it on foot from the funicular or the cable car by following signs uphill toward the grand Hotel Miramar Barcelona (Martínez is hidden around to the left side of the hotel).