The Best Hotels in Segovia, Spain, for Every Traveller 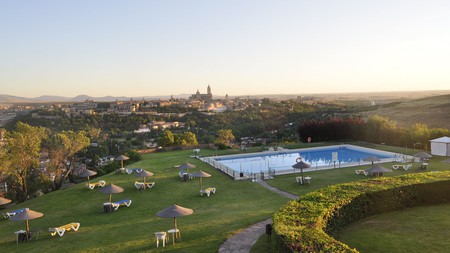 From ancient history to a buzzy dining scene, Segovia is an undiscovered treat off the typical Spanish tourist trail. Check in for a weekend of sightseeing or extend your trip at a luxury retreat with Culture Trip’s guide to the best hotels.

Few places in Europe can claim such a rich heritage as this Spanish city, just northwest of the national capital Madrid. In fact, the whole of Segovia has been designated a Unesco World Heritage Site, thanks to a wealth of ancient architecture that includes an iconic Roman aqueduct, a soaring Gothic cathedral and a fairytale castle. But the city in central Spain‘s Castile and León region is far from frozen in time, with a vibrant dining scene and lively cultural calendar that attract weekend crowds from Madrid and beyond. Here is our pick of the top hotels for your stay in Segovia. 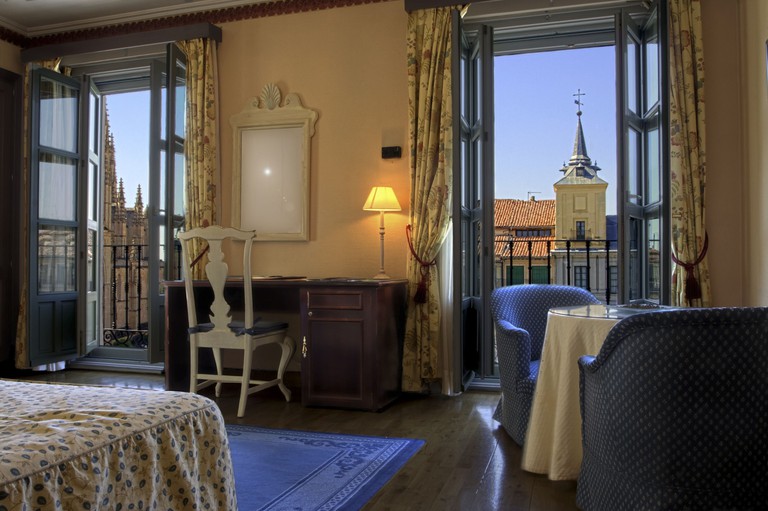 Overlooking the city’s Plaza Mayor, the Hotel Infanta Isabel won’t disappoint if you’re after somewhere right in Segovia’s historic heart. Rooms facing the square also offer side views of the Gothic cathedral, with higher floors providing views of the mountainous city’s surroundings. Traditional decor throughout ties in with the building’s 19th-century origins, and you can sample slow-cooked suckling pig on the hotel’s restaurant terrace – a real Segovian speciality.

Set amongst the narrow cobbled lanes on the northern edge of town, the Don Felipe is one of the closest hotels to the enchanting medieval Alcázar de Segovia castle-palace. The cathedral is also just a couple of minutes on foot in the other direction. While much of the hotel reflects its environment’s historic heritage, guest rooms are modern in both style and amenities. The lawned terrace is a pleasant spot to enjoy views over Segovia and the surrounding landscape. 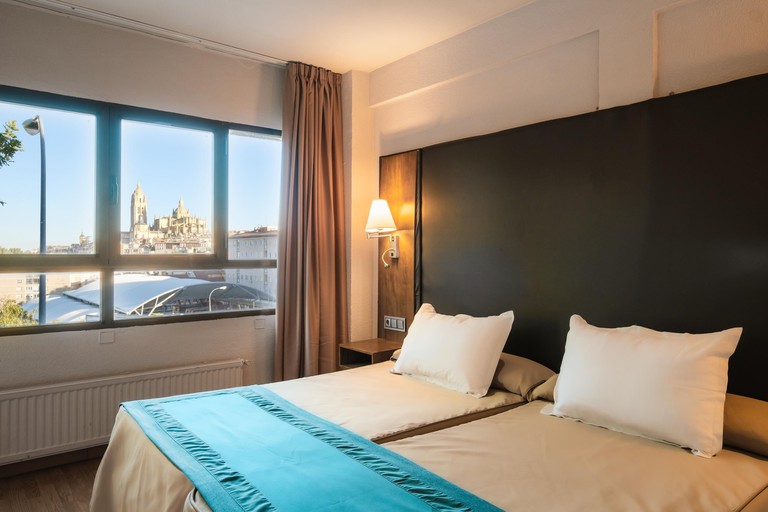 If you are travelling by car and looking for a budget option, the Hotel Corregidor is outside the city’s historic quarter. Parking is not a problem and the bus station is just opposite — or stretch your legs as the property is a short stroll from town and just a five-minute walk from the famous Roman aqueduct. Rooms are bright and modern, some on higher floors have views of the city’s famous landmarks. 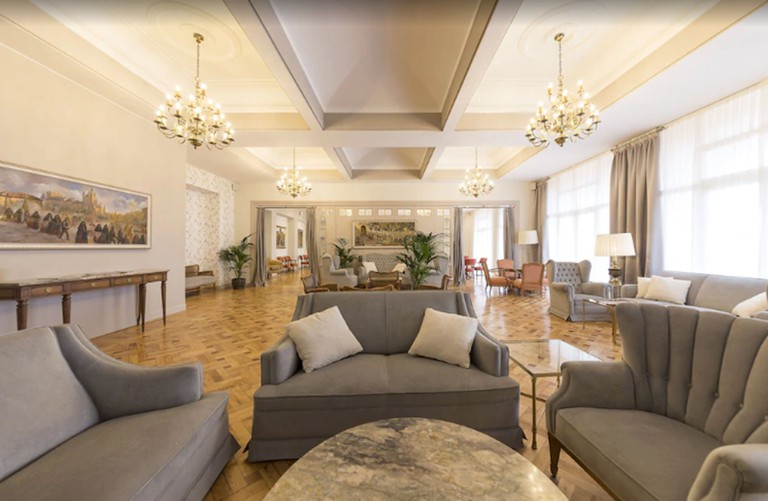 If you’re after a touch vintage Hollywood glamour, the Hotel Real Segovia was once a favourite with cinema royalty such as Sophia Loren. Today, the feeling of glamour remains but rooms have been tastefully updated in calming tones, while self-catering apartments are also available. Its location opposite the 12th-century San Martín Church puts it within easy strolling distance of all the city’s main attractions. But there’s plenty to enjoy on-site too: the hotel restaurant offers refined dining, and for some of the finest views in town, head to the panoramic rooftop terrace. 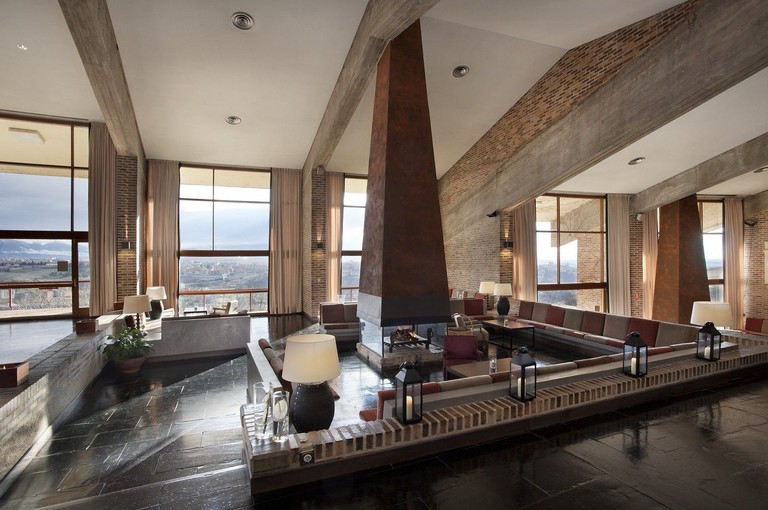 Positioned high on a hilltop overlooking the city, the Parador de Segovia provides dramatic sweeping views over the city and beyond. The vistas are best enjoyed from the hotel’s manicured gardens, scattered with sun loungers and featuring a large swimming pool. You can also take a dip in the hotel’s heated indoor pool, before dining on regional specialities in the restaurant, with views over the illuminated city below from your table. This beautiful property is a calming country escape within easy reach of the city — ideal if you want to combine some R&R with historical sightseeing on a short trip. 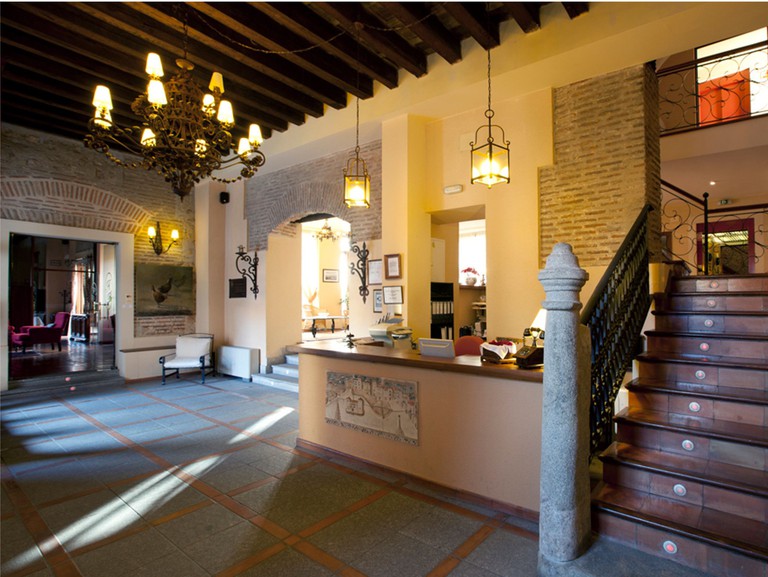 Embrace history at the Palacio Ayala Berganza. With its beamed ceilings, terracotta tiles and exposed brickwork, there’s much on display that points to the 15th-century origins of this grand mansion. The decor tends to align with the more medieval aspects of this period property, reflecting its location in the historic centre of the city. Dine to the strains of classical music in the hotel’s traditional restaurant or pick from numerous eateries a quick stroll away. 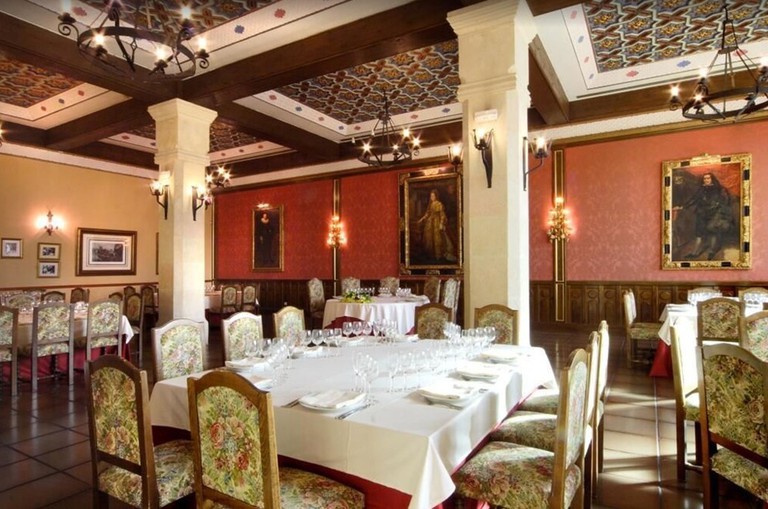 On the edge of what is new Segovia, this grand century-old building is one of the city’s largest hotels, with facilities to match its scale. In the gardens, you’ll find a large swimming pool and several tennis courts, while inside an extensive spa offers a wide selection of beauty and massage treatments. Hotel Cándido is not ideally located for Segovia’s main tourist attractions – which are a taxi ride away – so it’s more popular for business travellers, and also great if you’re looking for a longer relaxing trip with a few day outings to take in local culture. 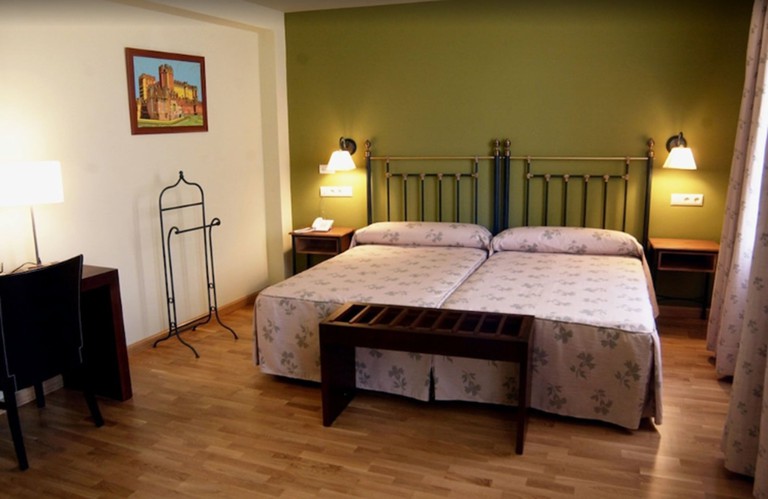 If you want to stay in a genuine piece of history, this 15th-century building houses an ancient cistern considered Segovia’s most important Roman remnant after the iconic aqueduct. Perfectly preserved coffered ceilings also add to the sense of bygone times, together with preserved Roman mosaics and antique artworks (the hotel even offers free tours). A basement spa provides a heated pool and sauna in calming ancient surrounds, while upper-level rooms offer views as far as the Sierra de Guadarrama mountain range some 35km (22mi) away. 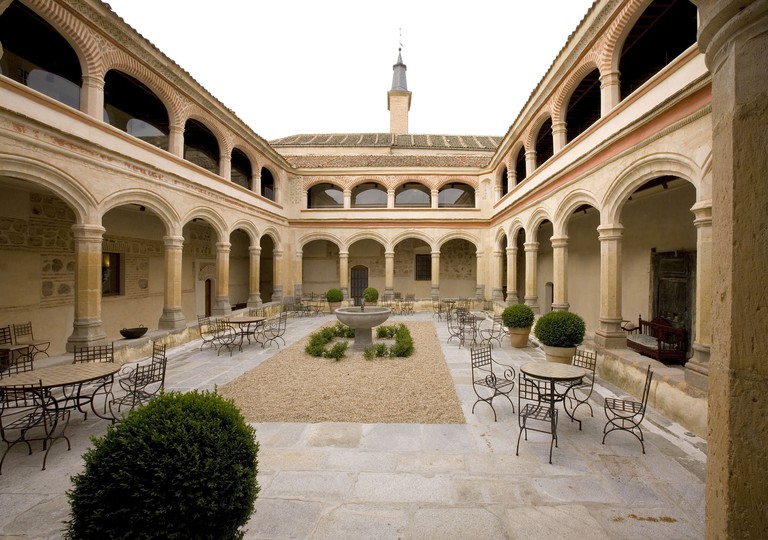 Not only is the Hotel San Antonio El Real located inside a 15th-century monastery, but the building is one of the best preserved examples of its kind. Its serene and elegantly crafted cloisters form the main centrepiece, while decor throughout the property mixes traditional Castile and Moorish influences. Enjoy the refined Mediterranean fare on offer at the on-site restaurant, or take the short walk into the centre of Segovia to explore the plentiful dining options.