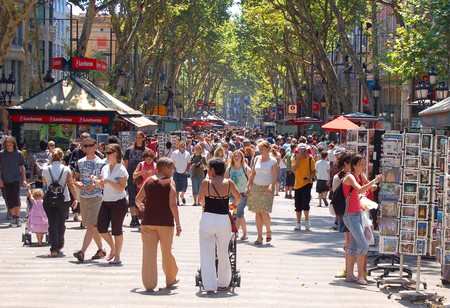 Last Saturday saw thousands of protesters take to the streets to voice their concerns over the negative effects of Barcelona’s booming tourist industry. From the rising costs of living in the city to the changing face of the city center as shops and businesses look to cater for tourists, the protesters are keen to see the local council take more action just days after it announced fresh restrictions on tourist accommodation in the city.

Last year an estimated 18 million tourists stayed in the Catalan capital, about nine million of which stayed in hotels and the rest in rented holiday accommodation. Add to that the approximately 12 million visitors who didn’t include an overnight stay – cruise ships and day-trippers – and it’s easy to see how Barcelona’s 1.6 million inhabitants might at times feel a little overwhelmed.

On Saturday, some 2,000 residents marched down one of the city’s most iconic streets – La Rambla – to voice their concerns over the negative effects of tourism on their quality of life. Organized by over 40 different neighborhood associations, the protest marched under the slogan ‘Barcelona is not for sale’ – suggesting that no price should be put on the residents’ right to live in and enjoy their city.

Choosing to protest on La Rambla was no coincidence, this is one of the areas in the center of town which many residents view as having been ‘taken over’ by tourists and those catering to them. The protest posters claimed that the march was symbolic of a ‘popular occupation’ of the boulevard which some locals consider to be a part of the city which is not theirs to enjoy.

Ever since the 1992 Olympics – and the vast program of urban reforms which took place ahead of it to transform the city into the tourist-friendly hub it is today – the number of visitors to Barcelona each year has grown considerably. While the tourist trade has brought considerable wealth to the city, with everyone from restaurant owners to clothes stores benefitting from the seasonal clientele, for many residents the most visible change has been the rise in living costs.

The protest came just days after the local council announced a cap on the number of new hotels and tourist apartments which can open in the city. Dividing the city into four zones depending on current levels of tourism, the law forbids the creation of new tourist beds in all but the areas on the city’s periphery. In the most affected parts, notably the Gothic Quarter, El Born and Poble Sec, the law even envisages a decrease in the number of beds available, forbidding the replacement of hotels or tourist apartments which shut down. 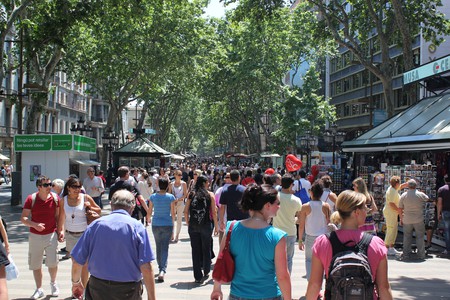 While those in the tourist industry have decried these latest measures, claiming that they will have a negative impact on the city’s economy, for many residents this is just the first step to reduce the negative impact of 25 years of council-lead promotion of Barcelona as a prime tourist destination.