A Postcard From Barcelona: a Writer Visits the Catalonian Capital for the First Time 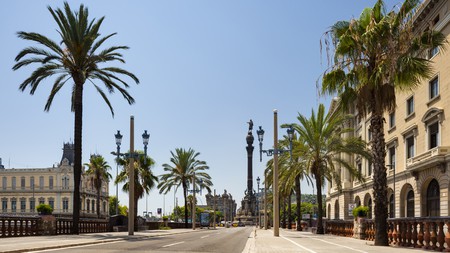 Travel writer Mark Nayler visited Barcelona for the first time in early 2020. Not long before, the city had been the stage of a fraught battle between Catalan separatists and the pro-union Spanish government. Now, Mark’s travelogue provides an insight into a well-touristed city before lockdowns halted travel to Spain.

Barcelona, the capital of Spain’s wealthy Catalonia region, has long been associated with dazzling architecture, a dynamic culinary scene and glorious Mediterranean beaches. I recently made my first trip to Barcelona, to explore its different neighbourhoods and to see how the failed Catalan independence movement of 2017 and the October 2019 protests against the sentencing of independence activists had left their mark on a city intent on differentiating itself from the rest of Spain.

Extensively redeveloped in the late-19th and early-20th centuries, Barcelona’s Gothic Quarter (or Barrio Gótico) is now one of the most famous neighbourhoods in Europe. Bounded by the Mediterranean, La Rambla, Via Laietana and Ronda de Sant Pere, it’s a labyrinth of narrow streets and attractive squares weaving between dark, sombre buildings. A bohemian ambience dominates, with vintage art and clothing stores, vegan cafés and tattoo parlours everywhere. Despite its tourists and souvenir shops, Gótico’s alternative credentials are evident from the moment you arrive.

Plaça de George Orwell – suitably named given the barrio’s anti-establishment atmosphere – is a great spot for a drink and a bite to eat. It received its official designation in 1996 when City Hall commemorated the British writer’s stint in Barcelona at the outbreak of the 1936-39 Spanish Civil War. Orwell, who fought against Francisco Franco’s fascist forces as a member of POUM, found a city bristling with a “revolutionary atmosphere … where the working class was in the saddle” (as he wrote in Homage to Catalonia, 1938). On the great writer’s patch of Barcelona, Bar Oviso attracts punters with its trendy interior and spacious terrace.

Continuing my exploration of Gótico, I headed to the famous Plaça de Sant Jaume, home to the austere headquarters of the region’s pro-independence government as well as Barcelona’s grand City Hall. When I visited on a weekday evening, there were still reminders that this has been the setting for momentous events over the past few years. Yellow ribbons are spray-painted onto the cobbles, showing solidarity with the pro-independence Catalan politicians imprisoned by Spain’s Supreme Court in October 2019 (nine leading independistas were found guilty of sedition and misuse of public funds in connection with the illegal independence referendum of 2017). Around the city, yellow ribbons also appear on facades, lamp posts and pavements, indicating widespread support for the men and women described as “political prisoners” by Catalonia’s separatist movement.

Support for the independence movement in La Barceloneta

Support for the Catalan secessionist drive is also evident in La Barceloneta, a former fishing quarter behind the beach from which it takes its name. From Gótico, it’s a 20-minute stroll along the glitzy Port Vell, past the gleaming yachts and smart seafood restaurants on Passeig de Juan de Borbón. Take any left off Borbón, and your surroundings change instantly: laundry dries on the balconies of scruffy townhouses, vying for space with the blue-and-red Estelada, the flag of Catalonia’s independence movement.

The Estelada was designed in 1918 by Catalan pro-independence activist Vicenç Albert Ballester i Camps, who had lived in Cuba and Puerto Rico and was inspired by their split from Spain in 1898 (known as El Desastre, or the Disaster, this was the year in which the Spanish Empire also lost the Philippines). The star-in-a-triangle design of the flags of those two countries, therefore, found its way onto the Estelada. Loyalties in La Barceloneta, though, start even closer to home; most apartment buildings also bear the neighbourhood’s own blue-and-yellow flag as well as the Estelada. This is very often the hierarchy of allegiances for Spaniards: barrio first, followed by city, region and country – although separatists drop the last one.

On a sunny Wednesday morning in early January 2020, La Barceloneta was full of cheerful activity. While residents greeted each other on the street, the fruit and vegetable stores were doing brisk trade and wonderful smells drifted from restaurants preparing their lunch menus (most of which offer two courses, a drink and dessert for about €10, or £9). My wandering eventually brought me to the loud and colourful food market, where I stopped at El Bar del Paco for a glass of cava, the fizzy wine native to Catalonia.

It was a bit early to sample Paco’s menú del día, which, at just €10.50 (£9.40), is reputedly one of the best in town; instead, I chose a bomba, a Catalan tapa said to have been invented in this very neighbourhood. A deep-fried ball of mashed potato with a pork or beef centre, served with spicy sauce and garlic mayonnaise, this feisty snack takes its name from the grenades thrown by anarchists at Franco’s troops during the Spanish Civil War.

After a pit stop at Paco’s, I strolled along the promenade that runs parallel to some of Barcelona’s beaches, including Playas Sant Sebastiá and Barceloneta. City beaches can be grubby and cramped, but Barcelona’s are gorgeous, with spacious stretches of yellow sand looking out to the glinting Mediterranean. At one end of this promenade is the sail-shaped W Barcelona hotel, sharply defined against the clear blue sky, while at the other is Frank Ghery’s beautiful Fish (El Peix in Catalan) – a 52m-long (171ft-long) structure of stainless steel, seemingly poised to leap into the ocean.

It’s hard to believe that La Barceloneta and the central district of Eixample are in the same city. Located north of Gótico, Eixample is a vast grid of traffic, designer shops and stately office buildings. Heaving with shoppers, sharp-suited executives and tourists, it seemed like an area that could be found in any major European city, until I arrived at one of Antoni Gaudí’s most fantastical works.

Located on the Passeig de Gràcia, Eixample’s central artery, Casa Batlló is illuminated by multicoloured spotlights after dark, its wavy, mask-shaped balconies eerily resembling skulls. Built in 1877, it was redesigned by the great Catalan architect for textile magnate Josep Batlló between 1904 and 1906. The facade is mesmerising, showing off as it does Gaudí’s playful, unorthodox imagination and love of bright colours.

It’s about a 20-minute walk from the heart of Eixample to one of the world’s most famous churches, Gaudí’s Sagrada Família. Heading towards it on my last morning in Barcelona, I felt that vague sense of pressure that precedes an encounter with anything dubbed “great”, whether it be a building, book, film or symphony. What if I was underwhelmed or unconvinced by the consensus?

I needn’t have worried. Sagrada Família is joyful and bold, its playful spires reaching up into the sky next to whirring, roaming cranes. Construction of this gloriously extravagant basilica began in 1852, and by 1926, when its celebrated creator was run over by a tram, less than a quarter of the structure was completed. Work has continued off and on ever since, although not without controversy. In the 1980s, Catalan sculptor Josep Maria Subirachs caused outrage by decorating one of the church’s facades with his designs. And in 2016, Barcelona’s mayor Ada Colau Ballano accused Sagrada Família’s board of working without proper building permits.

In many ways, the half-finished Sagrada Família is a perfect symbol for Catalonia and Barcelona: it is boundlessly creative, surprising, often controversial and, like the region’s independence movement, very much a work in progress. As I walked away from the dizzying cranes and spires, I wondered what would materialise first, a Catalan Republic or Gaudí’s completed masterpiece. I wouldn’t like to bet.