A History Of Seville’s Plaza De España In 1 Minute 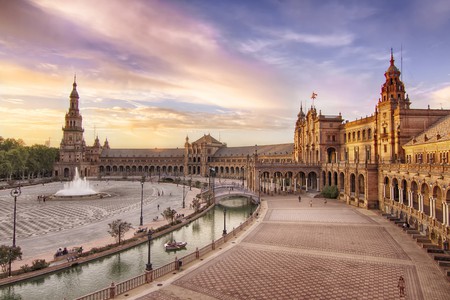 Seville’s famous Plaza de España monument was built for the Ibero-American Exhibition of 1929, which was held in the Andalusian capital. Located in María Luisa Park, it was the centrepiece of the exhibition and featured many pavilions, which aspired to show off to the world Spain’s accomplishments in industry and architecture.

The fascinating building was the brain child of Aníbal González and its magnificent structure swings around the plaza in a large semi-circle. At its center stands the spectacular fountain created by Vicente Traver. Built in the style of Renaissance Revival and Moorish Revival architecture, the whole building is surrounded by a moat, in which visitors can hire boats to gently row around. Elegantly curving over the moat are four bridges, each relating to the ancient Spanish kingdoms of Castile, Navarre, Aragón and León. Their supports also boast brightly colored, painted ceramic tiles, which add an extra exquisiteness to the architecture. 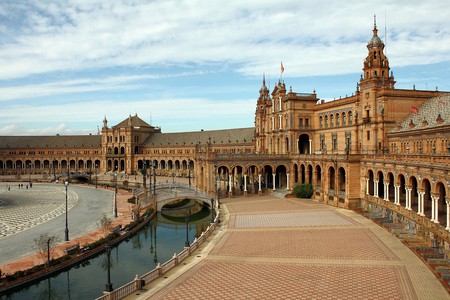 Surrounding the building are 48 small pavilions, each dedicated to a province of Spain and decorated in intricately illustrated ceramic tiles (azulejos). These were used to showcase the city’s industrial and craft capabilities. Today some of the pavilions are dedicated to museums, such as the Archaeological Museum and Museo de Artes y Costumbres Populares. 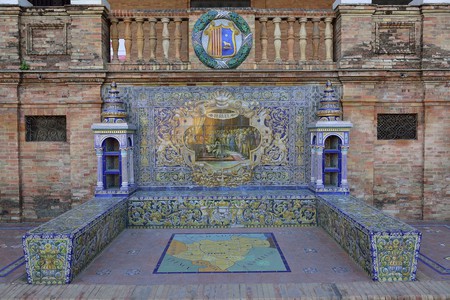 The María Luisa Park, in which the monument stands, was inspired by Moorish architecture and features many fountains, ponds, orange and palm trees, and curated flower beds. Designed by Jean-Claude Nicolas Forestier, one of the best ways to explore it is on foot, or by taking a romantic horse-and-carriage ride through the park and around the ginormous plaza itself, which measures 50,000 square feet. 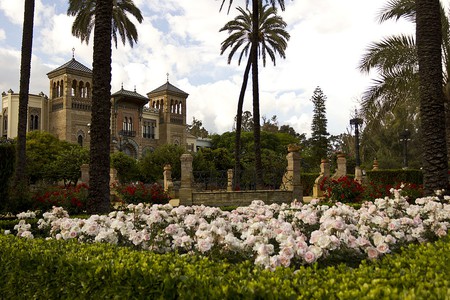 In more recent years, Plaza de España has also doubled as a filming location for movies, such as Lawrence of Arabia (1962) and Star Wars: Attack of the Clones (2002). The many arches and columns, along with the red brick facade and surrounding gardens, make this construction one of the most impressive in the country and no trip to Seville would be complete without a visit to the Plaza de España.