A Foodie's Guide to Eating Out in Bilbao, Spain: The Best Local Restaurants 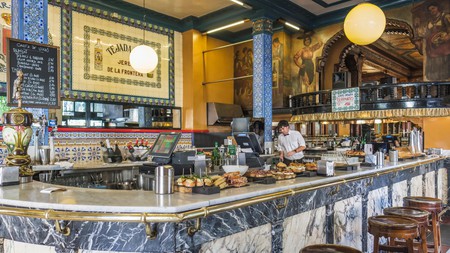 Bilbao, like many cities in Spain’s Basque Country, is known for excellent cuisine, particularly its fish and seafood. The city may be filled with haute cuisine dining options and Michelin-star restaurants, but it has more than its fair share of local Basque eateries, too.

Situated 16km (10mi) inland from the Bay of Biscay on Spain’s northern coast, Bilbao is the Basque Country’s biggest city. Along with San Sebastián, it’s also the region’s premier foodie hotspot, packed with restaurants and bars specialising in snack-sized pintxos – slices of bread topped with everything from ham and cheese to tortilla and roasted peppers. Here’s our guide to the top local eateries in Bilbao, as well as some tips on what to order when you’re there.

Interested in a foodie adventure to the Basque Country? Join our four-day food-filled Mini Trip to Bilbao – highlights include a pintxos tour of the city and day trip to San Sebastian. 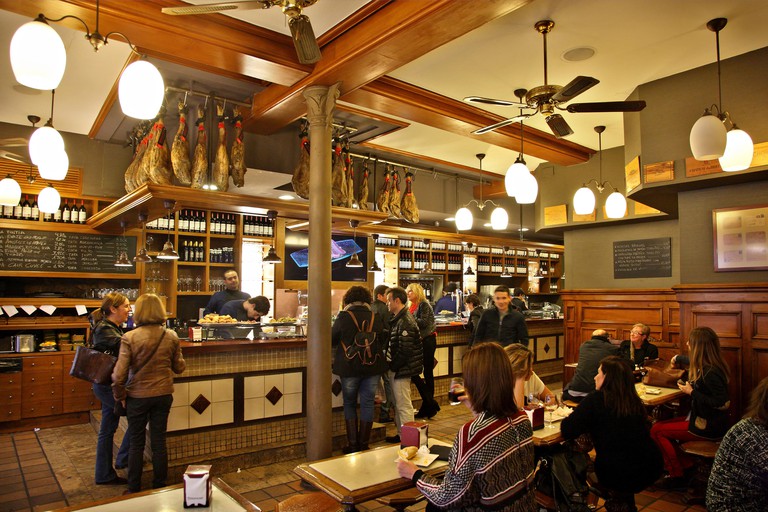 © Hercules Milas / Alamy
This classic pintxos bar has received some modern touches over the years, but its wood-panelled, terracotta-floored dining room remains much as it was when the doors opened in 1927. Its star snack is toasted bread topped with tender Iberian ham and olive oil, which is even tastier when paired with draft beer or one of their superbly priced wines. There’s also a seven-dish tasting menu if you fancy a bit of everything, and an on-site store selling local produce. 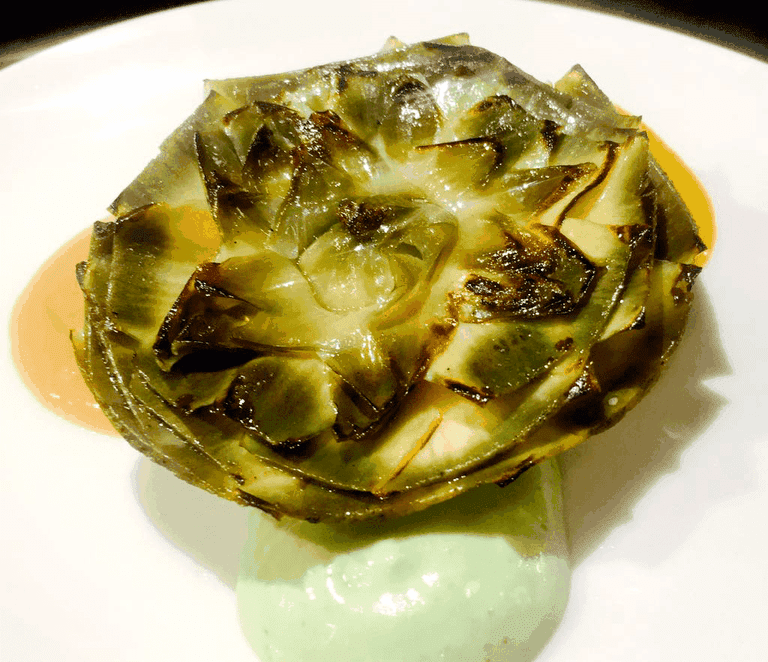 Courtesy of Los Fueros, Bilbao
Prawns from Huelva, battered hake with roasted pepper mayonnaise and slow-cooked pork ribs headline at Los Fueros, a Michelin-recommended restaurant in the Old Town, known as the Casco Viejo. There are four spaces in which to enjoy the contemporary cuisine: a pristine ground-floor space with tile mosaics on the walls, a mezzanine with two tables for special occasions, a first-floor dining room with kitchen views and an outside terrace. Start things off with their suggested amuse bouche – a prawn-infused bloody Mary. 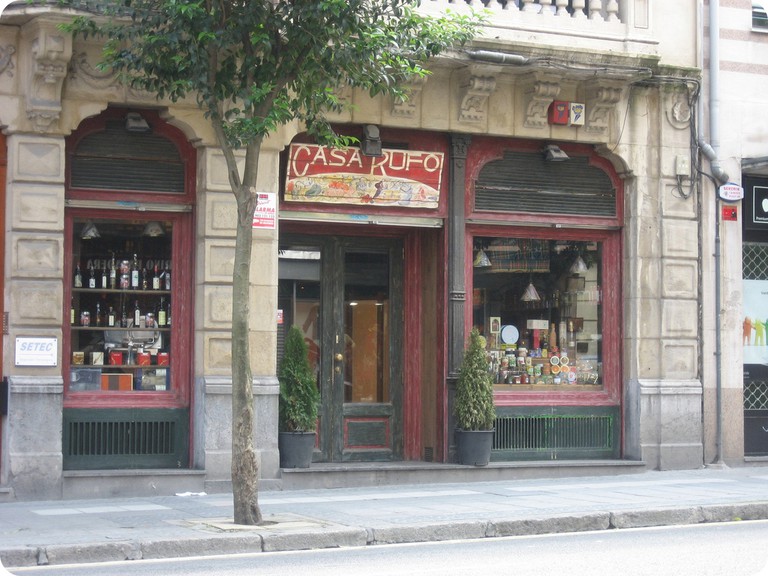 Courtesy of Boca Dorada
Casa Rufo started life in 1955 as a shop selling meat, canned goods, fruit and vegetables, only later turning into a restaurant. But the shop remained, creating a deli-restaurant hybrid in which you can browse for ingredients as well as enjoy a meal. Pull up a chair amongst the colourful shelves and tuck into house specialities such as oven-baked cod and one of the best chuletones (beef steaks) in Bilbao. Take-home items on offer include cured meats, locally produced honey and Casa Rufo wine.

Agape offers such value-for-money that its daily set menu – menú del día – has been selected as one of the best in the country by Spanish newspaper El País. Start with stir-fried chickpeas and vegetables with a babaganoush sauce or courgette soup, before moving onto grilled mackerel or free-range chicken breast with salmorejo, pilaf rice and rosemary emulsion. Even better, the menu’s fixed price includes bread, wine, dessert and water. The restaurant’s situated over the river from the Old Town, next to the train station. 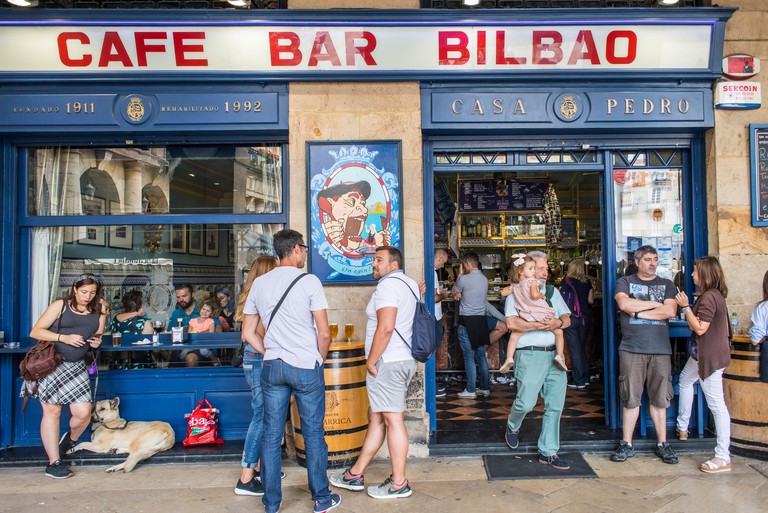 © Lucas Vallecillos / Alamy
Opened in 1911, this blue-fronted joint is one of the best pintxos spots in the Casco Viejo. Take a seat at the marble-and-brass bar or out on the Plaza Nueva terrace and snack on bread topped with cured hams, tortilla, roasted peppers and various types of cheese. Alternatively, try one of the rarely seen choices, such as duck or crispy elvers. Main courses and breakfasts are also served, and there’s a good selection of red and white wines from the Basque Country. 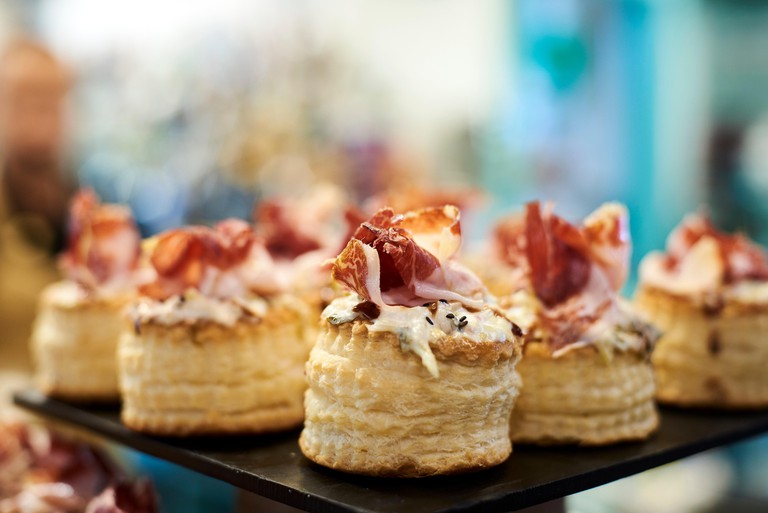 © agefotostock / Alamy
Early arrival is essential at El Globo, a popular eatery offering an enormous range of pintxos, even by Bilbao’s standards. In case you’re overwhelmed by the choice presented in the bar’s glass displays, opt for one or all three of the house specialties: pintxos topped with spider crab gratin, morcilla and peanuts or baby squid and squid ink. Also available are a take-away service and main dishes that feature veggie options, soups, stews and salads. 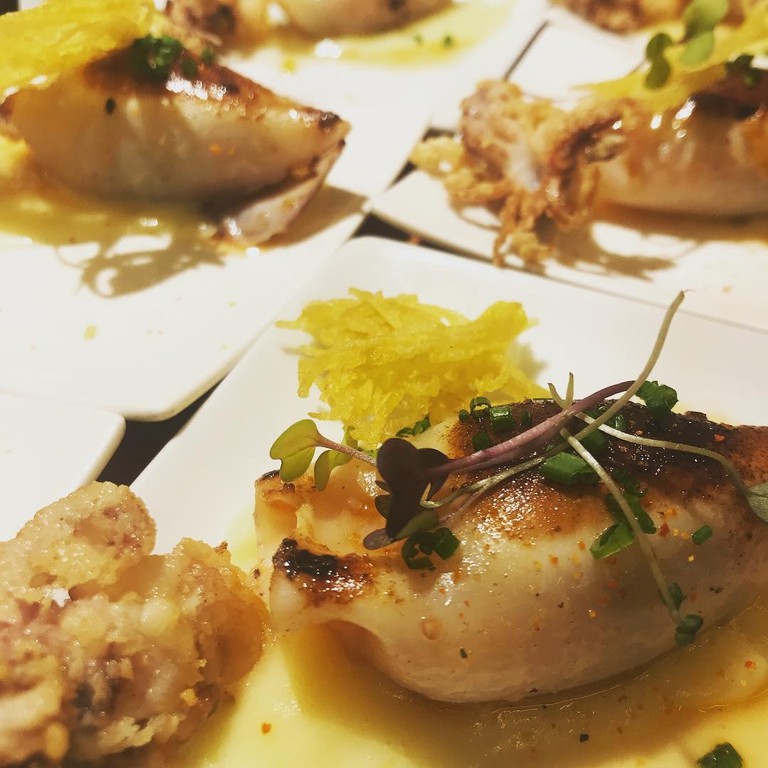 Courtesy of Gure Toki, Bilbao
Gure Toki (“our place” in Basque) is firmly established as one of the Casco Viejo’s leading pintxos bars, known for an exceptional level of creativity and Michelin-worthy presentation. Seating is in a cosy, contemporary interior, or on the terrace on Plaza Nueva, where you can watch Bilbao’s street life while feasting on mini burgers, chicken curry tacos and Basque wine. Choose cold pintxos from the bar-top displays or hot options off the chalkboard menus.

Restaurant, Spanish
Facebook
Email
Twitter
Pinterest
Copy link
Share
Pintxos are replaced by homemade stews on the bar at Rio-Oja, an unassuming restaurant in the centre of Bilbao’s Siete Calles (as the Casco Viejo is also known). To remind yourself that Basque cuisine is not all about ingeniously topped bread, order a helping of the lamb, beef, rabbit or fish stews, which are ladled out of bowls in the heated display and served with chunks of rustic bread. If you prefer a lighter bite, opt for clams in green sauce or paella. 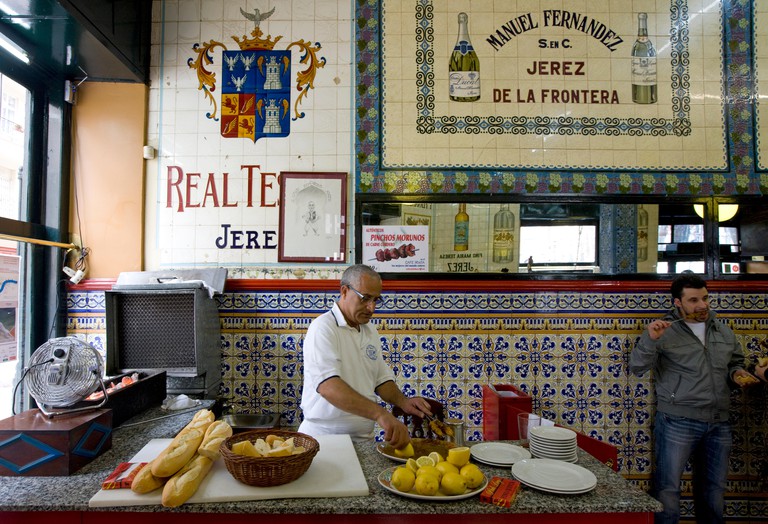 © Petter Oftedal / Alamy
Situated opposite the Albia Gardens in the modern part of Bilbao, Café Iruña is worth visiting just to see its early 20th-century interior – a high-ceilinged space dominated by Moorish arches and columns, chandeliers and hand-painted murals. Stick with the Moorish theme by ordering a grilled lamb skewer or, for a good value lunch, opt for sea bass or pork ribs as part of the three-course set menu. There’s also a decent-sized terrace outside for people-watching. 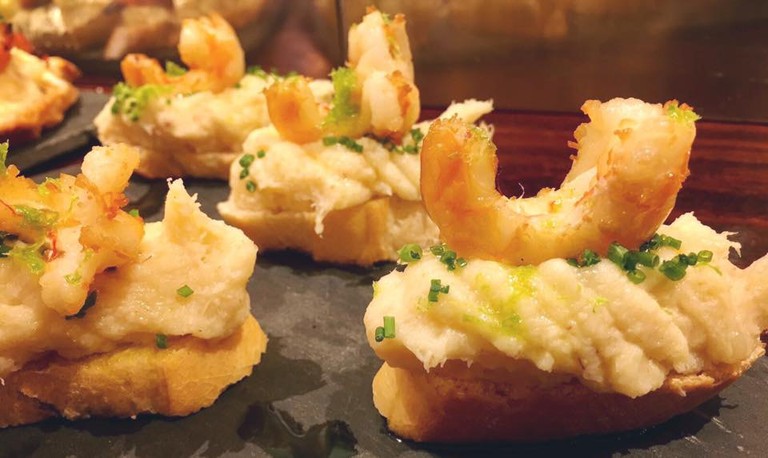 Courtesy of Baster, Bilbao
In an area packed with bars and restaurants, Baster stands out with Parisian-style terrace chairs, a modern, minimalist exterior and an inventive array of pintxos and tapas. Among these are a selection of mini quiches, some of the best sandwiches in Bilbao and a generous plate of patatas bravas. Accompany with draft zuritos (the Basque word for small beer) or their homemade vermouth and loaf outside, in the shadows of the cathedral.

Looking for more travel inspiration? Check out our short getaways to Barcelona and Andalucia – or browse our full collection of Epic Trips and Mini Trips.

This is an updated rewrite of an article originally by Esme Fox.