A Brief Introduction to the Equestrian Ballet of Jerez 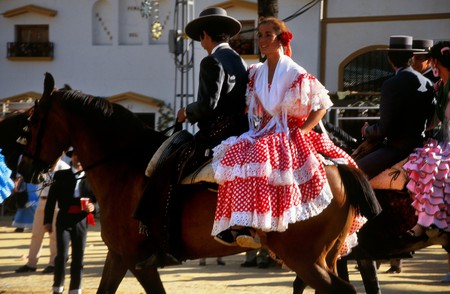 A visit to the stately and elegant western Andalusian town of Jerez is worth it in its own right, but particularly famous are the displays of horsemanship put on by the city’s prestigious Real Escuela Andaluza del Arte Ecuestre, or Royal Andalusian School of Equestrian Art. In fact, to describe these breathtaking equestrian ballets solely as displays of formidable horsemanship is slightly misleading, because the horses are no slouches either.

The Andalusian horse – Pura Raza Española – has long been one of the most sought-after breeds in Europe, its agility and noble temperament making it the warhorse of choice for many armies over the centuries. Every year, the Royal School selects the finest foals from the region’s thoroughbred Andalusian studs and trains them for four years. During this time they are coached in classical dressage, Spanish “cowboy” – i.e. cattle herding – dressage, carriage-pulling and other typically equestrian work. 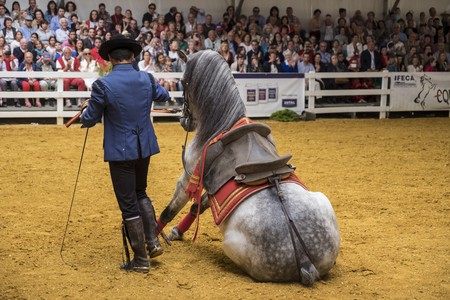 This is not just to keep alive the quintessentially Andalusian tradition of refined horsemanship, but in order to prepare the animals for performing in one of Spain’s most popular shows – “How the Andalusian Horses Dance”, staged by the Royal School throughout the year in its purpose-built 1,600 seat-arena.

And the name is no exaggeration. This spectacular 90-minute equestrian ballet takes place every Tuesday and Thursday – and Fridays in August and September – at noon and is likely to be one of the most memorable things you will see on a visit to southern Spain. Each stage is set to classical Spanish music and the riders dress in the traditional 18th century riding costumes that are also much on display during Jerez’s enchanting May Horse Fair, “Feria del Caballo”. 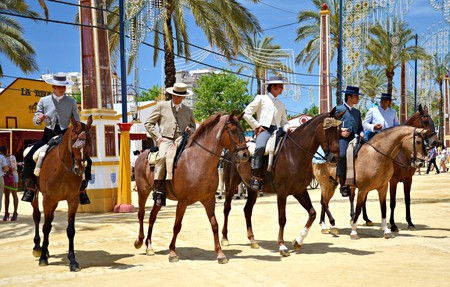 Some of the most virtuoso feats of horsemanship are to be seen in the demonstration of Doma Vaquera, or Spanish cowboy riding techniques, in which the rider holds in one hand a long lance used for cattle herding or branding and thus has only one hand free to control his spirited colleague. This is even more impressive – and cooler – than it sounds, and is far from a celebration of a skill set now superseded by machinery: on cattle farms and bull-breeding ranches throughout Andalusia today, these incredible techniques remain an essential component of the “cowboy’s” repertoire.

The rest of show is hardly less astonishing. Displays of classical dressage techniques and of work “in hand” – the name given to routines in which the horseman commands his steed on foot with the use of long reins – display the strength, agility and elegance of the Andalusian throughbred as well as the skills of the riders. Indeed, this show is about the harmony that is possible between man and horse as much as it is about the techniques of the former or the physical prowess of the latter. 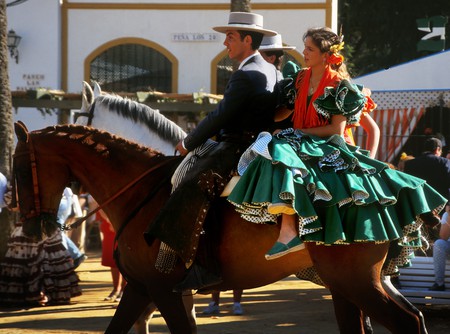 An equestrian display at the Jerez Horse Fair | © Dominic Alves/Flickr

For an opportunity to admire the stars of this iconic show close-up, Jerez’s annual feria in May (this year it runs from May 13–20) is an absolute must. The colorful and gently hedonistic Feria del Caballo (“Horse Fair”) is one of southern Spain’s best ferias and, as is fitting for a city so steeped in equine culture, it centers around the region’s thoroughbred stallions. Throughout the day, they can be admired on the fairground as their traditionally-clad riders trot from marquee to marquee enjoying glasses of the sweet local sherry – another hallmark of Jerez culture.