A Brief History of the Palacio de Cibeles

Madrid’s Palacio de Cibeles is one of the most notable landmarks in the city. Located in the Plaza de Cibeles and behind the famous Cibeles Fountain, where the famous streets of Alcalá and the Paseo de Prado meet, the whole area is beautiful and lively.

The history of the building dates back to 1904, when it was decided that a new post office would be constructed. The site – where the building currently stands – was chosen and a contest was created to see which architectural firm would get to design the building. Three were considered: Felipe María López Blanco and Luis Montesinos, Carrasco-Saldaña, and Antonio Palacios and Joaquín Otamendi. 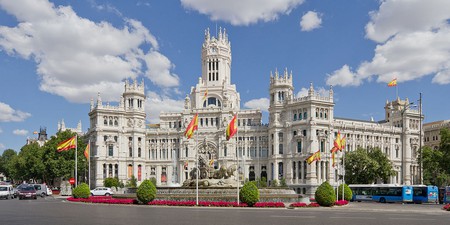 The Palacios-Otamendi proposal was the most daring, yet seemed to fit with the structure and design of the Paseo del Prado. It was also the cheapest of the three, and was eventually chosen. However, the building process was long and problematic, due to political issues, funding problems and general controversy. The building was approved in 1905, construction began in 1907 and wasn’t finished until 1919. The building also ended up costing three times what the initial quote was, for a total of 12 million pesetas (approximately €72,000 or US$76,000).

The building was officially inaugurated on March 14, 1919 with the name Catedral de las Comunicaciones (Cathedral of Communications). 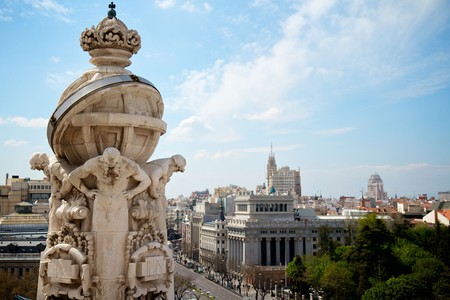 Luckily, the building managed to stand despite the bombings during Spain’s Civil War, however, it did suffer some bullet holes and hits, which are still visible today in some areas of the façade.

Renovations were done to better the building in the 1990s, and in 2003, the movement began: changing the building from being the central post office to a government building, where the mayor would eventually hold office starting in 2007 – Alberto Ruiz-Gallardón was the first mayor to have an office there. The new name would be the Palacio de Cibeles (the Cibeles Palace), the name it holds today, which seems appropriate considering the grandeur of the building.

The palace was opened to the public in 2011, and now visitors can enjoy drinks or dinner with a view on the terrace on the eighth floor. There’s a space for exhibitions, a grand hall for events, a library and an area on the ground floor, the Centro Cultural, with couches, tables and free wi-fi where locals and tourists alike can stop in to escape the cold or simply take a little break to read the newspaper or surf the web. The outside of the building is often decorated with lights to celebrate holidays in Madrid, like Christmas.