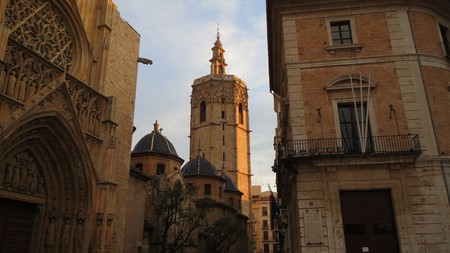 Every visitor to Valencia will see El Miguelete, the bell tower attached to the famous cathedral. The curious octagonal-shaped tower that rises up over the rooftops is a striking feature when wandering the city’s old town, not only due to its incongruous height but because of its distinct and unusual appearance.

El Miguelete, meaning Little Michael (also called El Micalet in the Valencian language), seems to be missing the top – the roof or cover for the part containing the bells. If it looks like it was never finished, well, that’s because it wasn’t. Work was halted on the tower before this part was added and never resumed. But Valencians decided they liked it just the way it was and the unusual tower has become one of the city’s most famous symbols. 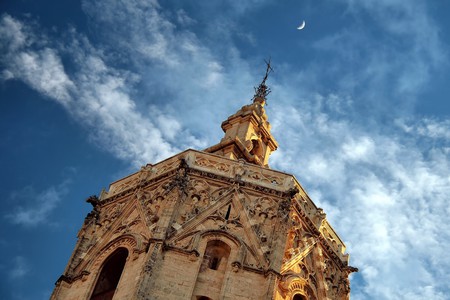 The bell tower was constructed over four centuries, started in 1381 and completed in 1736 with various different architects overseeing the work. This is why, despite being mostly in the Valencian Gothic style, the tower also bears the signatures of various other architectural styles.

The tower is named after the giant bell suspended at the top, which despite being called ‘little’ Michael is one of the biggest in Spain, weighing more than seven and a half tons and dating from 1539. In fact, most of the bells in the tower bear the names of people; Caterina, Jaume, Pau, Manuel, Maria, Vicent, l’Ursula, l’Arcis, l’Andreu and la Barbera.

Little Michael is still very much in use. The bell sounds on the hour and is extremely loud up close, so if you visit around the hour and find yourself standing directly under it, be warned!

The tower also has a couple of less obvious features to look out for on your visit. There’s a tiny secret room inside the tower, with the smallest crack of a window through which sunlight only reaches during July and August. Despite being called La Presó (The Prison) it was more of a hiding place, used to give asylum to those who came to the cathedral fleeing injustice.

Meanwhile on the outer walls you can search for a special stone which is able to ring the bell during times of emergency. If the special stone is struck by a blunt object the sound travels all the way up to the top of the tower and reverberates inside the bell – a serious feat of engineering for the time.

Like most landmark buildings, El Miguelete has collected its fair share of curious tales over the centuries. Probably the strangest is the one dating back to 1528, when a group of jokers freed a donkey – belonging to the mason master in charge of building work on the tower – from a nearby shed and tempted it up to the top the tower. Perplexed churchgoers, finding the donkey at the top of the tower the next day, thought it was the work of the devil until the prank was uncovered. It took a group of sailors to come up with a pulley system to get the donkey back down.

It’s not the easiest climb to the top, with 207 fairly steep steps. Once you reach the platform though you’ll be rewarded with a bird’s eye view over the city. It’s good to schedule this visit towards the end of your stay in Valencia when you’ve become familiar with the local landmarks. Try to spot the Torres de Serranos and Quart, the City of Arts and Sciences and the Mestalla football stadium, or just enjoy the view over the city and out towards the Mediterranean sea. 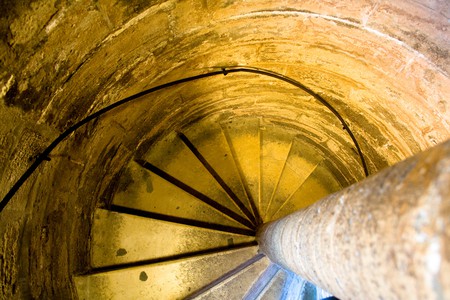