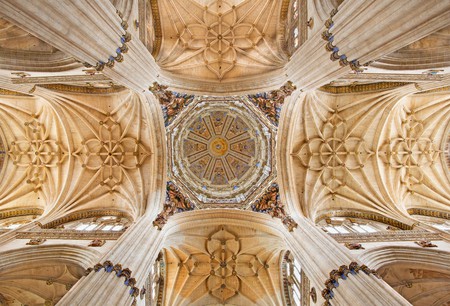 Salamanca is just two hours drive from Madrid, but feels like its a world away. This UNESCO World Heritage city is one of Spain’s most beautiful. Its elegant architecture and fascinating history offer visitors much to discover. Here are nine good reasons why we think you should visit.

Salamanca University is one of the oldest and best in Europe. Since the 13th century it has hosted many historical and literary giants such as Miguel de Cervantes, Christopher Columbus, Ignatius Loyola and Hernán Cortés. Maybe it’s this mighty legacy, the 160,000 leather bound volumes that fill the university library or the classical honey coloured university buildings that create an atmosphere akin to Hogwarts. You’ll feel transported to a world that hovers somewhere between Harry Potter’s scholarly adventures and the darker underworld of a Dan Brown novel. The street names are hand painted in a spidery Romanesque font in blood-red paint. These scrawls suggest coded messages and the millennia of study and research.

Salamanca clearly prides itself on its past and is maintained immaculately. Unlike the outwardly vibrant, creative cities of Barcelona and Valencia in the east, you’re unlikely to find even the smallest splash of graffiti or street art in the old town of Salamanca. This enhances the sense that Salamanca may simply be a spectacular film set and you are one of the characters embroiled the historical mystery! 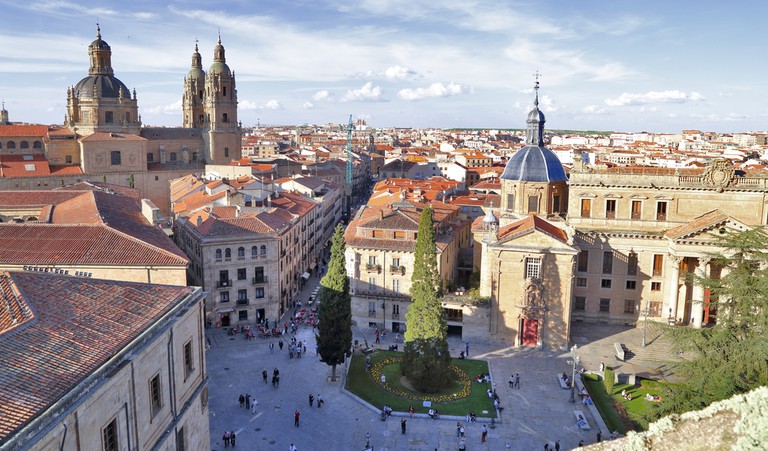 Located in the interior of Spain, Salamanca sits in the heart of ‘old Castilla’ and boasts what’s often said to be the ‘purest’ form of Spanish language. There’s a multitude of language schools and students come from around the world to study the language here. Plus, Salamanca’s University attracts more than 2000 foreign students a year, ensuring the city retains a lively, international vibe. This is particularly evident in the vibrant nightlife and creates an interesting contrast between tradition and innovation, heritage and fashion. 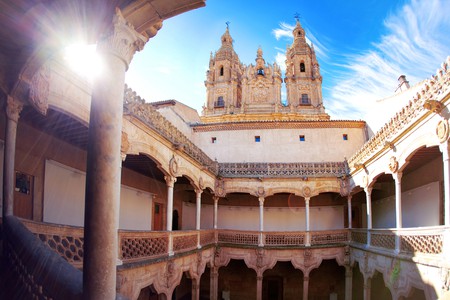 Travellers of all ages enjoy a treasure hunt and Salamanca has an enchanting trail. Crowds gaze up at the ornate Plateresque facade of the University hoping to find a tiny frog sitting on a skull. The façade was commissioned in 1529 by the Catholic Kings. Apparently the skull belongs to the young Prince Juan who died in adolescence in 1497. The frog represents the physician, Doctor Parra, who nursed the dying Prince. The locals nicknamed the frog ‘Parrita’ (little Parra).

Salamanca boasts not one, but two cathedrals, fused together. The New Cathedral was built in stages from 1509 and combines late Gothic architecture with the Renaissance style. Its ornate facade contain two mysteriously futuristic carvings. The first is the much loved Salamanca Astronaut. Clearly astronauts were unknown to the stone masons who built the cathedral between the 16th and 18th centuries… as were ice-cream cones… which makes the ice-cream eating gargoyle carved close to the astronaut, an even bigger surprise!

Known as the ‘living room’ of Salamanca, the arcaded Plaza Mayor is considered to be one of the most beautiful plazas in Spain. Built by the wealthy Churrigueras family in 1755 it is a stunning example of the aptly named Churrigueresque Baroque style. The town hall is the focal point of the Plaza, which is a meeting point day and night. Initially used as a bull fighting arena, it’s now home to boutique shops which are perfect if you’re browsing for souvenirs or want to soak up the atmosphere from the numerous bars and restaurants. 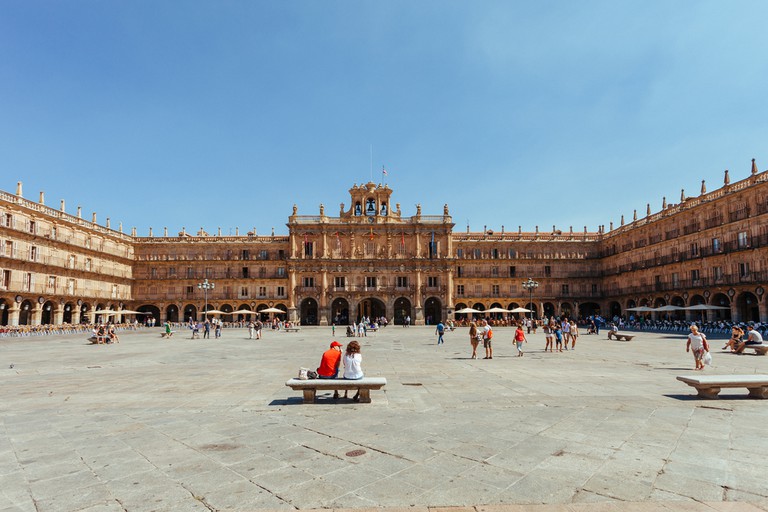 Salamanca boasts a good selection of museums. One of the most curious collections is housed in the elegant Modernist mansion of Casa Lis. Here you will find a vast collection of porcelain dolls, considered to be one of the best collections of dolls in the world. The house is named after its original owner, Miguel de Lis and has all the hallmarks of the Modernist era. The airy steel frame construction has a spectacular stained glass skylight and pictorial windows. 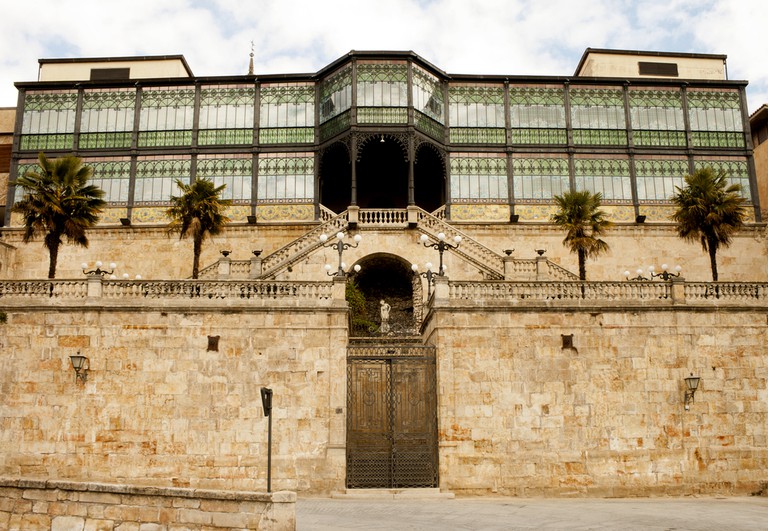 Founded by a Celtic Tribe, conquered by Hannibal and later controlled by the Romans, Salamanca became a significant city. It was located on the Via de la Plata (Roman silver route) which ran from Merida to Astorga. The Roman walls and defensive turrets still stand today. Puente Romano de Salamanca, an elegant Romanesque bridge, made with 15 granite arches, spans the Tormes River. Originally constructed in the year 89, it was reconstructed after being damaged by flooding in the 17th century. Don’t miss the much loved statue of a male pig on the Salamanca side. 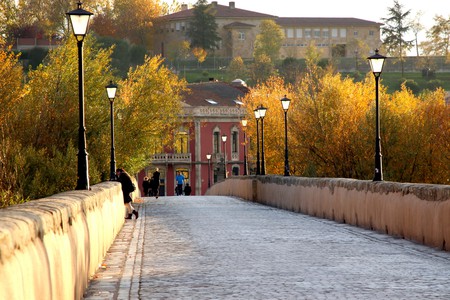 The city is home to many exquisite buildings. One of the most extraordinary is the Casa de las Conches. The facade is studded by carved stone shells reminiscent of those worn by pilgrims on the Camino de Santiago. The Old Cathedral is Romanesque, dating from the 12th century, and is famous for its ornate Gallo Tower. You can climb up and enjoy breathtaking views across the rooftop of the Cathedral and into the labyrinth of lanes below. If you’re feeling brave you can look down from the upper gallery inside the Cathedral and admire the frescoed walls from this unique aerial perspective. 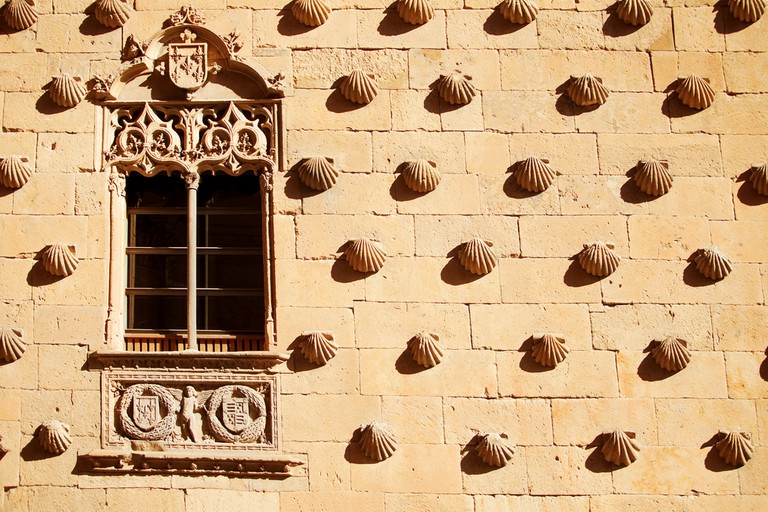 If you enjoy discovering hidden architectural gems, you will be delighted with the Cielo de Salamanca (Salamanca Sky fresco) located close to the Escuelas de Menoras. An attractive courtyard leads you into a modest chapel which houses a beautiful painted ceiling depicting the astrological symbols and their celestial constellations. This exquisite ceiling was painted by Fernando Gallego between 1483 and 1486. The space is cool and dark which is delightfully refreshing on a hot day. Let your eyes adjust and the mythological creatures and gilded stars will magically reveal themselves above you.

If you’re curious about Spanish cuisine beyond the much-famed seafood and paella of the coasts, then Salamanca is an excellent place to eat. The food and drink is typical of Spain’s lush pastures and mountain highlands. The dry, cool air provides Salamanca with fantastic cheeses and delicious cured meats. Local cattle are raised for the distinctive “morucha” beef, dark and flavoursome. Hunting is popular in Autumn so pheasant, hare and wild boar are available alongside year-round favourites such as cochinillo al fuego (suckling pig), veal and roasted goat.

The wine lists in Salamanca are excellent and offer a wide range from delicate fruity whites to hearty reds. Look out for wines produced in the two most important local regions; Ribera del Duero and the Sierra de Salamanca. For dessert, Moorish rule was short lived in Salamanca but their sweets have remained. The list of sweets here is almost endless; pop to the food market or cafes to sample amarguillos (almond cookies) and bollo maimón (sponge cake).