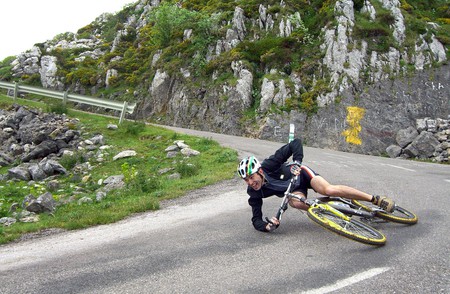 Get stuck in to some serious cycling | © Mikel Ortega / Flickr

There is some wonderful cycling to be enjoyed near Jerez de la Frontera, in southern Spain. Here’s our pick of the most spectacular routes starting in or near this beautiful city, that run through some of Andalusia’s most captivating scenery.

An enjoyable ride of just over 30 kilometres (19 miles) takes you from Jerez de la Frontera to the characterful city of Cádiz – one of Andalusia’s best-kept secrets. The route runs along well-maintained cycle tracks and greenways, giving you the chance to stop for sherry and tapas in El Puerto de Santa Maria, one of the three towns that constitute southern Spain’s famous “Sherry Triangle”.

From Jerez, it’s a 40-kilometre (25-mile) ride through vineyards and charming pueblos blancos to the spectacularly-appointed town of Arcos de la Frontera. Perched atop sheer cliffs overlooking the Guadalete valley, Arcos is a must-visit, boasting a magnificent Moorish castle and superb bars and restaurants – perfect places to refuel for the return ride to Jerez, along the banks of the Rio Guadalete. 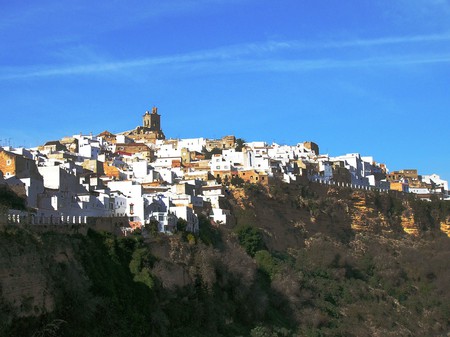 The gorgeous seaside town of Sanlúcar de Barrameda is the third point of Andalusia’s “Sherry Triangle” (along with Jerez and El Puerto de Santa Maria). It’s reached by a mainly flat, undemanding ride of about 30 kilometres (19 miles) that gives you opportunity to admire the region’s vineyards and olive groves. When in Sáncluar, enjoy a glass of manzanilla, a pale, dry sherry that’s only made in Sanlúcar.

For a longer route that could be split over two days (perhaps with an overnight stop in Bornos, where you’ll find some magnificent Renaissance buildings), cycle from Jerez to the incomparable town of Ronda. The ride is about 120 kilometres (75 miles) long, taking around eight hours in total – or four hours a day if you’re splitting it – with a final section that curves around the northern tip of the stunning Grazalema natural park. 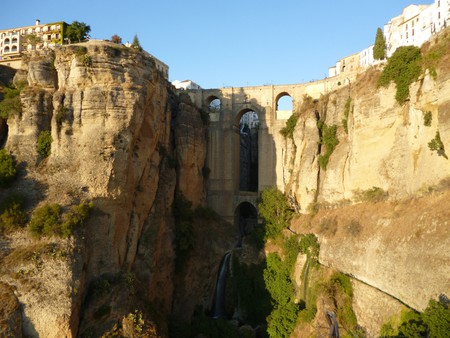 The beautiful town of Ronda, with its amazing "Puente Nuevo", is an 8-hour ride from Jerez | © wellseo.de / Flickr

Along with Jerez and Sanlúcar, El Puerto de Santa Maria forms Spain’s “Sherry Triangle”. This charming little town is only about an hour’s bike ride from Jerez, with a final stretch that takes you through vineywards growing the palomino grape, so essential for the dry sherry, or fino, that’s made here. Before cycling back, take a tour of the Osborne or Luis Caballero bodegas, which include sherry tastings.

For a great day’s cycling, head to the beautiful walled city of Lebrija, located in the neighbouring province of Seville. Reached by a 90-minute (30 kilometre (19 miles)) ride through undulating countryside, this attractive town is home to some notable 16th and 17th century churches. After checking them out, relax with a tapa of snails (caracoles, the local speciality) with a glass of sherry, before heading back to Jerez. 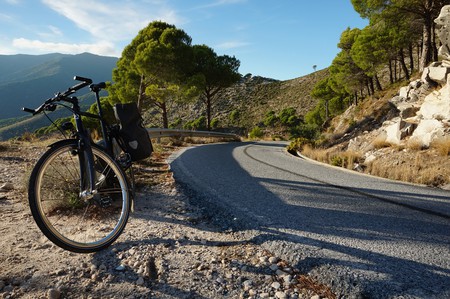 Cádiz province boasts one of most spectacular bike rides in Spain – a 35-kilometre (28-mile) route that runs through Andalusia’s most untamed countryside. The Via Verde de la Sierra – part of a 2,000-kilometre (1,243-mile) network of abandoned rail tracks that has recently been restored for cyclists – starts in Puerto Serrano (a fifty-minute drive from Jerez) and leads to Olvera, passing though meadows, tunnels, tranquil valleys and along riverbanks along the way. Unforgettable.