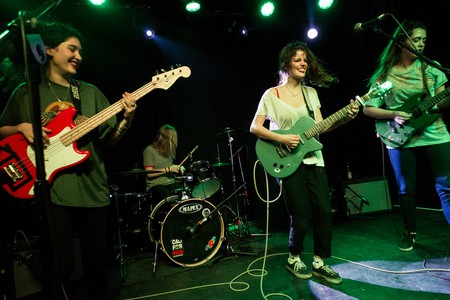 Spain may have given the world flamenco, but it has more to offer than just this traditional genre. The country’s rich musical heritage spans the La Movida indie scene to its current hip hop and alt-rock – from living legends to the latest big names, make sure you add these artists to your next playlist.

Hinds is a Spanish garage rock band that has found international fame since forming in Madrid in 2011. The all-girl group sings in English and mixes the sound of early nineties grunge with 1960s California, all the while sounding like they may well have recorded their songs on an old tape recorder, giving them a welcome homemade feel that has all but died out in this era of pop perfection. Their 2016 debut album Leave Me Alone was released to wide acclaim and the band’s live performances are legendary for their DIY, rock and roll vibe.

More cultural phenomenon than just mere musician, Alaska is a legend in Spain. She was a prominent member of La Movida Madrileña, the counter cultural movement that swept across Madrid after the death of Francisco Franco and Spain returned to democracy. She befriended Pedro Almodóvar, appeared in a few of his early films, all the while fronting several bands that provided a soundtrack for the changing times in Spain. She fronted Alaska y Dinarama during the 1980s and today, fronts Fangoria, which makes delightfully camp disco-infused tracks. She is instantly recognisable for her signature black hair, smokey eyes and red lips.

Spanish musician Pablo Díaz-Reixa makes electronic tunes under the name of El Guincho. His sample-heavy songs are genre-bending, mixing influences including dub, Afrobeat and rock and roll, with a Brazilian carnival-meets-Caribbean twist (check out the steel drums on the track Bombay). El Guincho’s music has a summery vibe ideal for a lazy day by a Spanish beach.

La Mala, as she is known, was one of Spain’s first female hip hop artists when she rose to prominence in the late 1990s and is just as popular to this day. Her style was new, fusing the influence of traditional flamenco with contemporary hip hop and raps dealing with hard-hitting issues like poverty and racism.

Dubbed the ‘Spanish Drake’, C Tangana brings a soft edge to Spain’s hip hop scene; he’s more likely to be found singing about lost love than about violent life on the streets. The 26-year-old singer and producer from Madrid made Spaniards sit up and take notice in 2016 with the release of his single Antes de morirme featuring singer Rosalia.

Basque indie band Delorean, who are based in Barcelona, have been amassing fans and praise since the mid-2000s. Their spiky guitars, electronic pop and English lyrics bring to mind French band Phoenix. They have remixed songs for the likes of Franz Ferdinand and The xx and released their latest album, Muzik, in 2016 to critical acclaim.