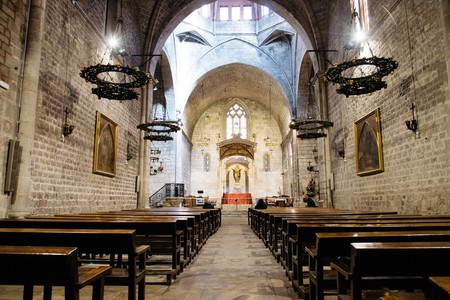 Barcelona‘s Gothic Quarter is without a doubt one of the most popular sightseeing areas in town. Its narrow streets and myriad historic buildings contribute to its enigmatic charm. Read our guide to the many quirks and oddities that are hidden amongst its streets.

The journey begins on Carrer del Bisbe, meaning ‘Bishop’s street’, where you will find the stunning neo-Gothic bridge known locally as the ‘Pont del Bisbe‘ or ‘Bishop’s Bridge’. The bridge crosses the street uniting buildings on either side: the ‘Casa dels Canonges‘ (Canon’s House) and the ‘Palau de la Generalitat‘. Although it blends in seamlessly with its Medieval surroundings, the bridge was in fact constructed in 1928 by Joan Rubió i Bellver. The architect’s ambition was to construct a series of new buildings inspired by the dominant Gothic style of the area, but his project was not accepted by the government, who only validated the construction of the Bishop’s Bridge. The architect, disappointed with the decision, secretly incorporated a hidden skull with a dagger inside. Legend says anyone who crosses the bridge and sees the skull will fall prey to an evil spell.

The Gothic Quarter is also well known for its lively and spontaneous arts scene. From one day to the next, any unassuming street corner can suddenly become home to the latest creation by one of Barcelona’s many street-artists. One of the most mysterious additions to the area’s living collection is the hidden spider that one day appeared on the corner of Carrer de Montjuïc del Bisbe. Little is known of its origin but the piece has become one of the more permanent features of the Gothic tableau.

This charming square, popular with tourists looking for the perfect picture, harbors a relatively violent history. Today, the square is a haven of peace and tranquility, and many visitors enjoy sitting in one of the quiet terraces and admiring the small church of Sant Felip Neri. This is when you might notice the irregular marks on the wall, betraying the square’s gruesome history. During the Spanish Civil War (1936-1939) the square was at the centre of many a conflict, including the bombing between opposing sides. The shrapnel destroyed part of the church’s facade of and today these wounds have been left open for all to see as reminder of the suffering the city of Barcelona endured throughout the war. 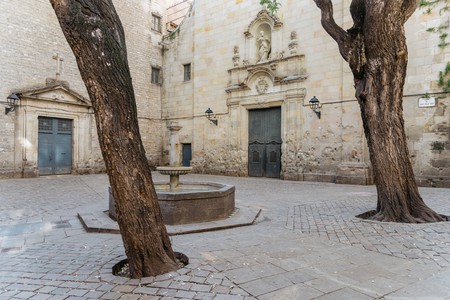 Hidden Remnants of the Roman Past

It is widely known that Barcelona, like many other Mediterranean cities, has strong historic ties with Rome. Walking through Paradis street there is an ancient sign that announces the August Temple. 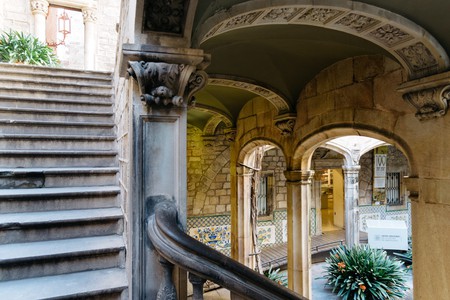 Sant Iu’s Square is the ideal place to sit back and relax away from the streets of the Gothic Quarter. What better way to soak up the atmosphere and admire the cathedral than by enjoying a live music performance by one of the city’s many musicians. There are no schedules for the street musicians, who come and go with the passing of time, so just grab a seat and wait for the next show to commence.

When visiting Sant Iu’s Square, one feature of the historic surroundings that many fail to notice are the ancient Hebrew inscriptions on the wall, a reminder of the city’s multicultural history. The wall belongs to the “Castell del Lloctinent”, and is a Medieval building which dates back to the 15th century. Some of the stones used to construct the castle where in fact from the Jewish cemetery on the slopes of Montjuïc hill. During the 12th and 13th centuries, there was an important Jewish community which lived in Barcelona under the protection of the King of Spain and was known as the ‘Call‘. In the 14th century, following a series of attacks known as pogroms in which many of the local Jewish community were killed, survivors were banished from the city and all traces of their presence was covered up. The ‘Castell del Lloctinent‘ is just one of the many reminders of this dark moment in history.

The Mailbox And The Magic Turtle

Last but not least, the ‘La Casa de l’Ardiaca‘ or ‘House of the Archdeacon’, a Medieval ecclesiastical building dating back to the 12th century. The small mailbox situated on its facade, which was designed by the 19th century Catalan architect Lluís Doménech i Montaner, was built upon request for the local Lawyers’ Association, which at the time was based within the building of ‘La Casa de l’Ardiaca.’ The design is rich in symbolism: the swallows represent the idea that justice needs to fly high and rise above the worlds’ ills; the ivy symbolizes the difficulties lawyers back then already encountered with bureaucracy; the turtle represents the slow pace of the judicial system. Unsurprisingly perhaps, the mailbox’s design was well received by the local magistrates at first, but eventually it was accepted.

Legend says anyone who touches the turtle will immediately be cured of the curse brought by the skull and dagger on the Bishop’s Bridge. 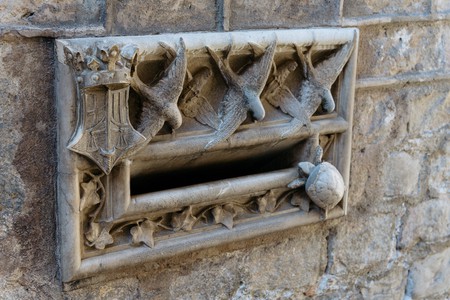